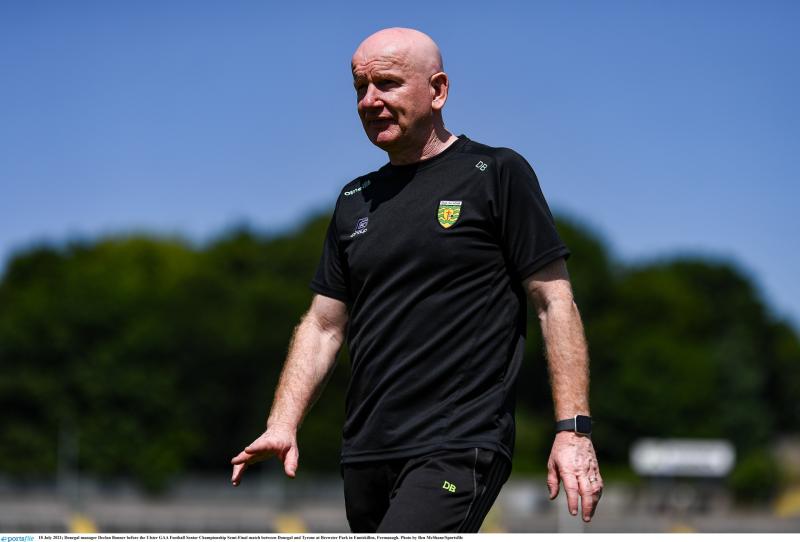 Bonner will return as the Donegal senior football manager for 2022 having been recently reappointed for another two-year term.

The Na Rossa man is in his second stint as Donegal boss having previously had the reins from 1997-2000.

The world now is much changed from his first period in the job.

Bonner uses social media, but keeps away from the negativity.

“It’s very easy for people to sit down and criticise and that’s the world now, in any walk of life,” he told the Donegal Democrat in a wide-ranging interview.

“Anyone that throws up this kind of thing are nameless, faceless people, writing in under assumed names. It’s there and I know it’s there, but I live my life away from that world.

“No-one likes it, but it’s there. There are some people who just sit down and type in to criticise anything and everything to get whatever kick they do.”

Donegal’s 2021 Championship was ended by Tyrone in an Ulster semi-final. In the wake of that defeat, Donegal, and their manager, came in for the type of criticism that has now become inevitable on various social media channels.

Bonner said: “I try to avoid it, but I know it’s there. I always listen to people if there is something constructive. There is no issue with constructive comments.

“There is always someone waiting in the long grass. I don’t pay attention to it much. When you have a family and they see it, that’s when it becomes a problem.

“When you’re the Donegal manager, you’re judged on your success. When you’re winning things, you’re up there, but when you lose games it’s the opposite. That’s always the way. That’s the game.”

Stephen Rochford will return as the head coach in 2022. The Crossmolina man has been in the role for the last three years and will continue into next year.

Bonner said: “It’s important that we retain that experience. It’s very difficult to get someone of that experience on the coaching field. He has coached at the highest level.”

Paul McGonigle, who was Bonner’s assistant manager, will not be continuing and it is not likely that a successor to that position will be sought.

Bonner took some time to consider his own future before deciding that he wanted to remain.

He said: “It will never be easy, but the desire and the hunger is still there.

“It was a big decision. It’s a very full-on job. Even the off-season is busy, getting everything together.

“Energy is a huge part of it. There are days where you’re flat but as long as the passion is there, you can get over those days. The day I get up in the morning and the passion isn’t there, that’s the day I shouldn’t be there.”