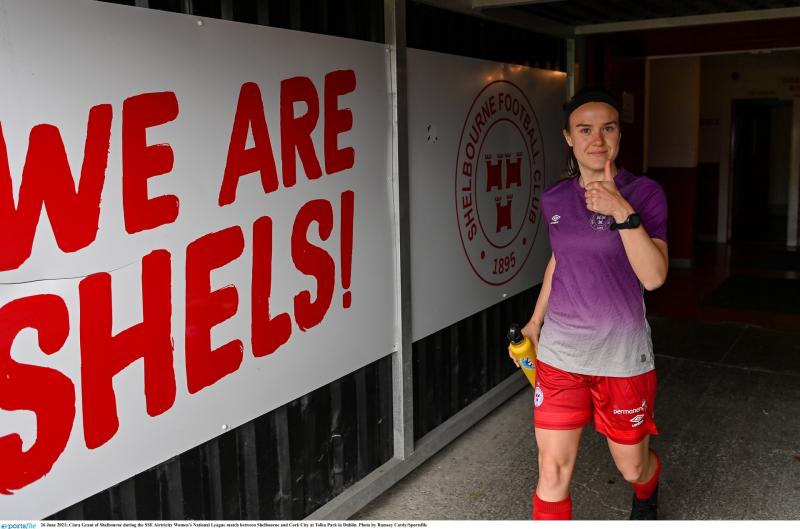 Ciara Grant wondered where to go and what to do. After a season with Sion Swifts in 2019, Grant found her love of football again.

Capped by the Republic of Ireland a dozen times in the early part of her career, Grant wanted the taste of international duty again. The 28-year-old recently returned to the Irish squad after impressing for Shelbourne.

Grant has seen Shels team-mates Jamie Finn and Emily Whelan move to Birmingham City this year. Grant is a qualified doctor, graduating from UCD in 2017, but the Letterkenny woman is willing to put her medical career on hold.

“I’ve made that transition where it’s football before work,” Grant says ahead of Sunday’s FAI Women’s Cup final against Wexford Youths in Tallaght. “I just pushed myself as best I could last year during Covid.

“Last year was weird and was just very stop-start with Covid. There is so much competition in the Ireland squad. A lot of those players are professionals and they’re so good; I just want to keep improving and get back into that team again. 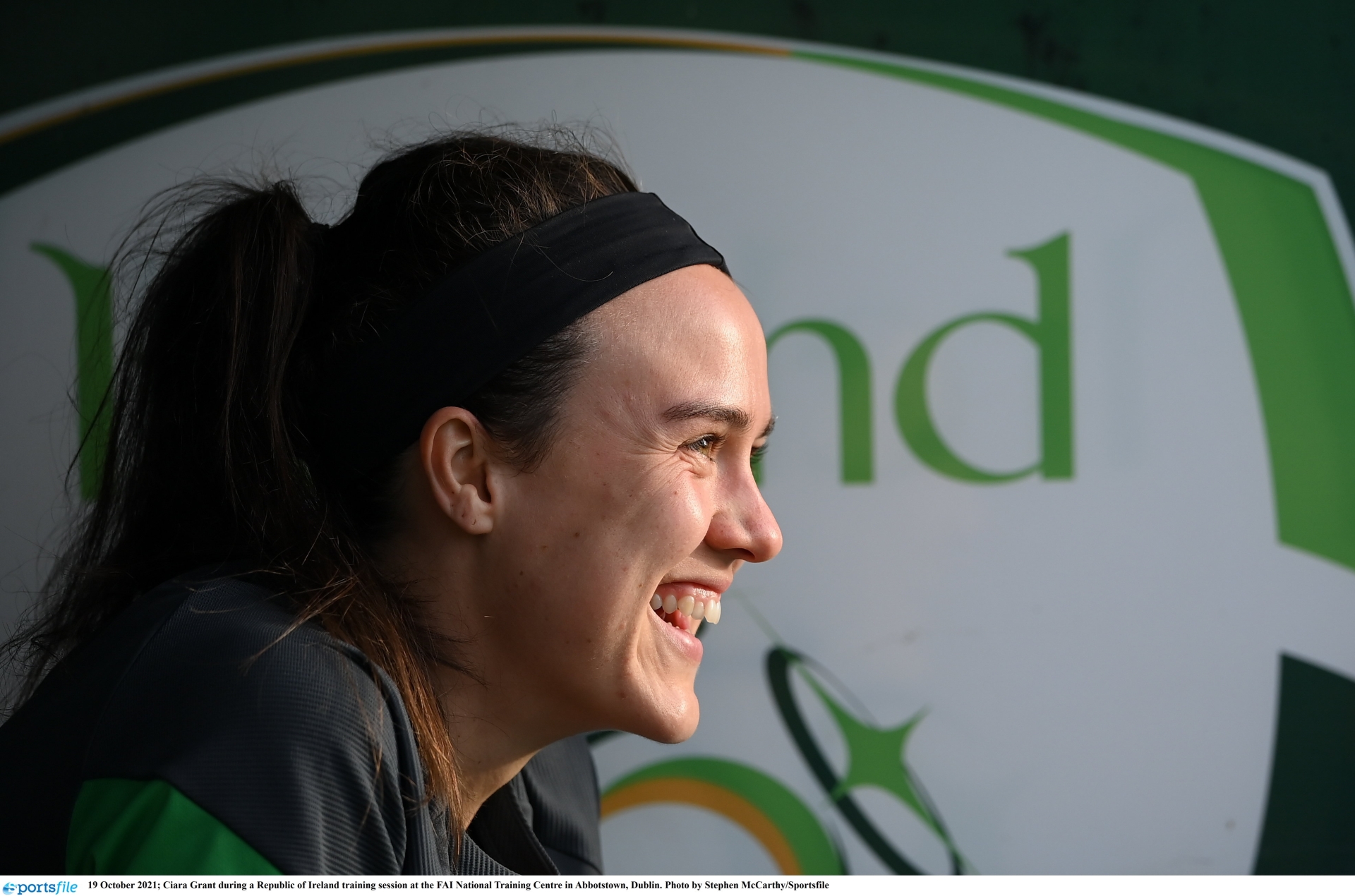 “That year I was with Sion, one of my big goals was getting back into the Irish squad. I fell in love with the game again.”
At the moment, she is working at health clinics in Dublin and Kildare as well as doing long shifts at the Santry Sports Clinic.
Not that it could be called ’spare time’, but Grant is also managing to do a Masters in Sports Medicine.

During the early weeks of the Covid-19 pandemic in March, 2020, Grant returned home to Letterkenny and voluntarily worked shifts at Letterkenny University Hospital. “I just came back to help out as best I could,” she says.

She spent three months at LUH, working in a non-Covid ward before returning to Dublin as she was a medical tutor with the Royal College of Surgeons in Ireland (RCSI).

“It was stressful for everyone at LUH,” she says. “Every hospital was sort of left to its own devices. Letterkenny had bad surges of Covid at times. It took a week or two and the chaos would start again.

“It was hard for everyone, especially the people stuck on the Covid side. Even if you were on the non-Covid side, maybe cases might pop up and it would be chaos again. You’d be closing down a ward and doing contact control.”

Grant, though, is steadfast in her insistence that the atmosphere at LUH is ‘the best ever I’ve worked in’. “They’re doing their best despite some circumstances.”

Coming from such a pressurised working environment, Grant can take the sport in her stride. Saturday was a different sort of strain; the unknown. 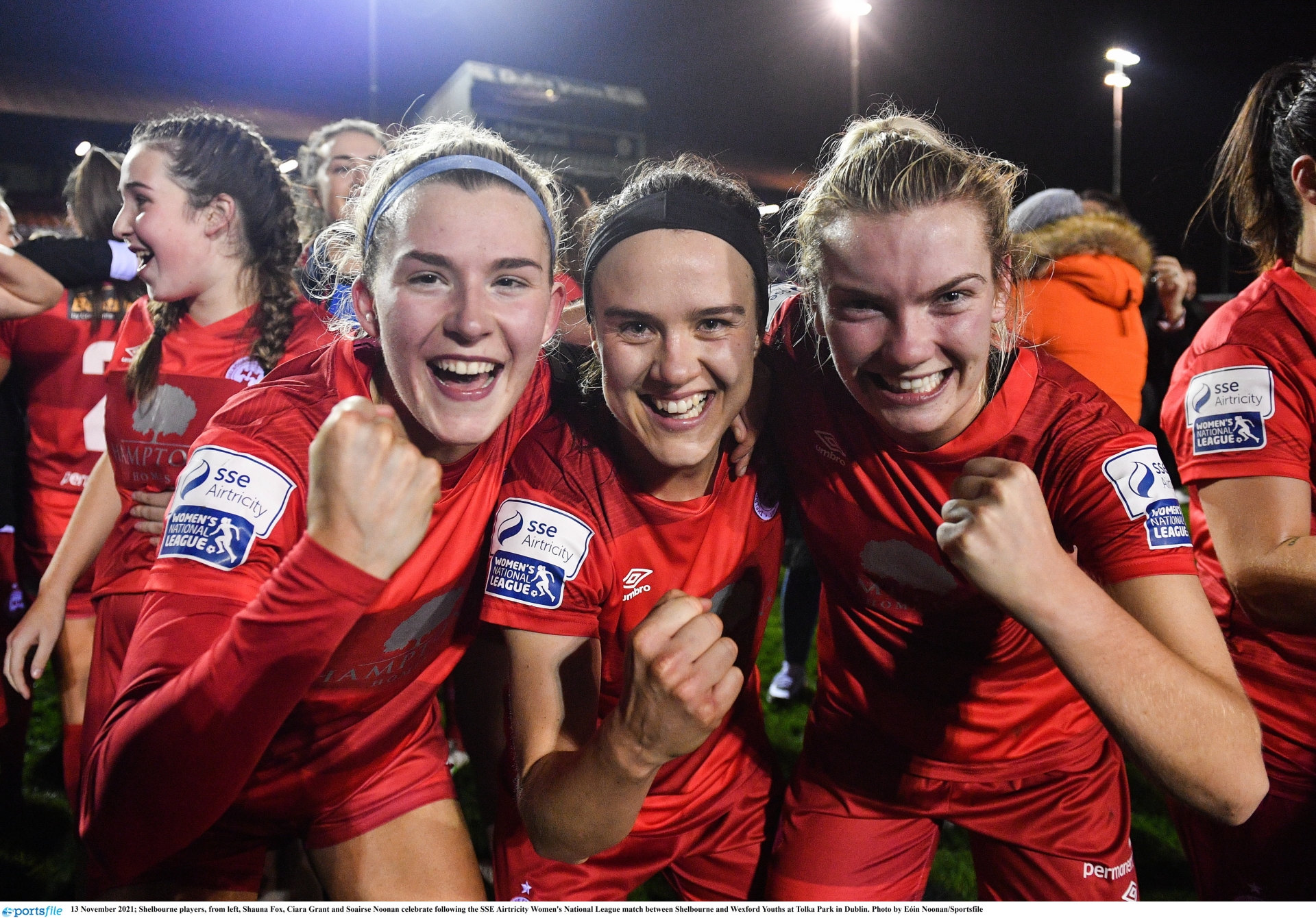 Shelbourne won the WNL title on a night of high drama. Peamount United, who were in the box seat, 2-0 up and sailing only to lose 5-2 against Galway at the same time as Shelbourne grabbed a 3-2 win over Wexford in Tolka Park.

Grant and Pearl Slattery, the Shels captain, were awaiting the delivery of a corner kick at one point in the second half.
“Are Galway winning?” Slattery wondered aloud. “I think so,” Grant, jostling for space in a crowded penalty box, responded. “You could sense it from the crowd,” Grant says.

“There was a whole crowd of Shelbourne fans there. They were chanting and singing and lighting flares and everything. When they were cheering for things that weren’t happening on our pitch, we realised.”

Shels were 3-1 up thanks to Jess Stapleton’s brace, either side of a Noelle Murphy penalty, but when Wexford’s Kylie Murphy headed home her second goal of the night to make it 3-2, the tension at Tolka Park was almost unbearable.

“Wexford were piling the pressure on,” Grant says. “Our legs started to go a bit then and we just had to protect our goal. They got a goal on 86 minutes and we just locked up the shop.”

When the final whistle shrilled and news of Peamount United’s 5-2 loss to Galway was being relayed, Grant was in disbelief.
“Someone still had to show me that we had won it,” she says. “Someone screamed at me: ‘We did it!’ It was class.

“Not one person thought we were going to win it. No-one had anything to celebrate, no clothes or even shower stuff. It was great to do it at Tolka Park. We haven’t lost there all season.

“We had to win the game. We didn’t want a situation where we’d throw it away ourselves, so just winning our own game was all we were thinking about. There were some rumours going around the pitch at one stage and at half-time we just said that we had to go win the second half to make sure we had a chance.”

Grant, who lives a stone’s throw from the Richmond Road, had nothing packed. “It wasn’t that we wrote it off, but once we got a big beating by Peamount it was a case of ‘let’s win every match now and be in with a chance if Peamount slip’.”

Shels and Wexford come face-to-face again this weekend in the Cup final. It’s eight years now since Grant scored for Raheny in the first WFAI Cup final to be played at the Aviva Stadium, her cracking volley sending the Dublin outfit on their way to a 3-2 extra time win over Castlebar. 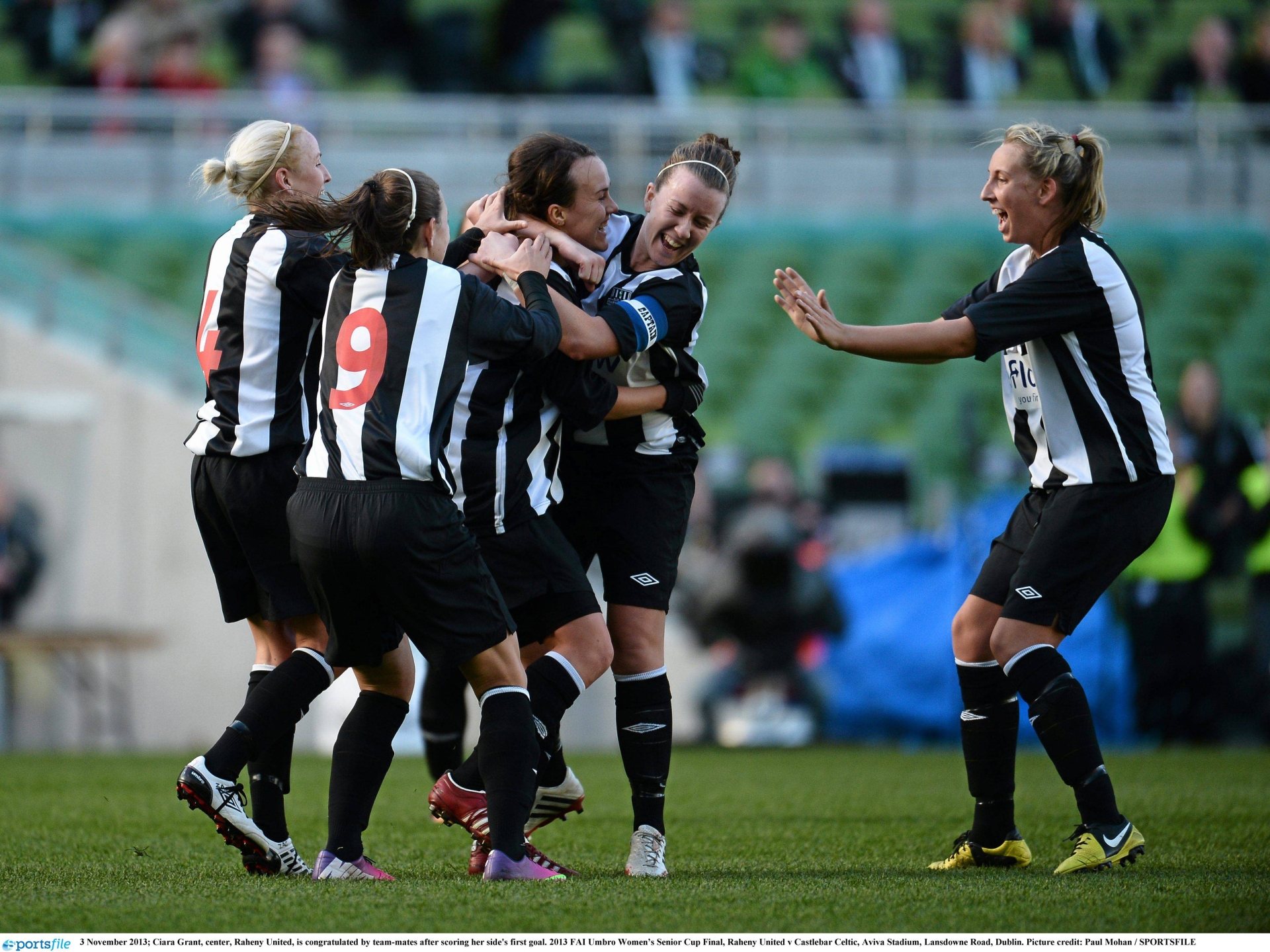 “That was incredible,” Grant says. “That goal was absolutely a great moment. I don’t score too many so it’s nice to keep that in the memory.”

“It’ll be weird playing Wexford again, We blew them off the park for the first 30 minutes on Saturday. This will be a completely different ball game and different occasion this week.

“We’ll be ready to go again. Winning the League has taken the pressure off a bit for the Cup final in a way. This time last week it was really do-or-die.”