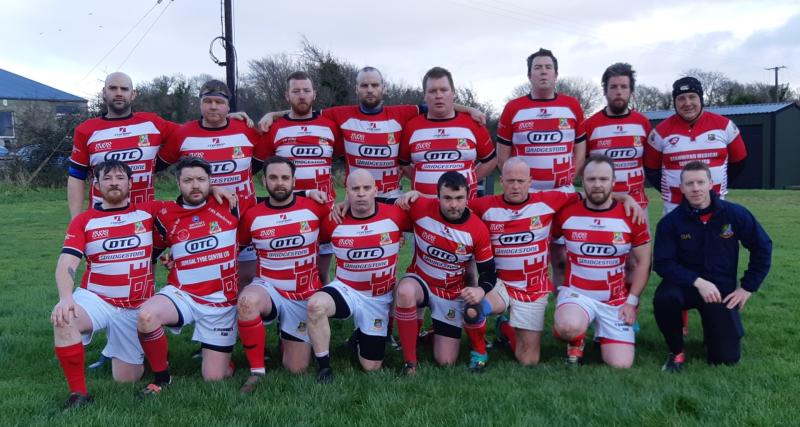 Donegal Town RFC pictured before their game with Ards

Donegal Town bowed out of the Forster Cup after a good battle with Ards at the Holmes this afternoon.

Underfoot conditions were tricky and when you throw in a few hailstone showers, it was difficult for the players, who tried manfully to serve up their best.
Ards had the elements in their back in the opening half and took full advantage, running three tries to reach the break ahead by 22-12.
They opened the scoring on four minutes with a penalty from outhalf Cooke. They increased that lead thanks to a great break from scrum half Matthew Peat, who found a big hole in the Donegal Town defence.
Donegal responded really well to this score and after a period of sustained pressure captain Daniel Gildea got over the line for the touchdown and Petso Cannon added the conversion to leave it 10-7.
Ards added their second try on 25 minutes through flanker Walker. The conversion was missed and Donegal were still well in the game, only eight points adrift.
However, in the final 10 minutes they lost centre Kieran McKeown to a yellow card and Ards took full advantage, going for the line from the penalty and from the line-out they worked the ball out to centre Cooke, who got in under the posts to leave the conversion an easy one.
Donegal got the perfect start to the second half through an individual break from Petso Cannon to cut the lead to 22-12. Cannon missed the conversion but Donegal were now on the front foot.
However, despite being camped on the Ards line for a period after 55 minutes, they came away empty handed, having being held up short on three separate occasions.
The effort involved eventually took its toll and the game was finally put to bed with seven minutes left when Ards broke to get winger du Silva over in the corner.
As darkness fell, the conversion was missed but Ards closed out the scoring in the final minutes with Walker kicking a penalty.
There were plenty of heroic performances from the home side with captain Daniel Gildea leading by example. Centres Kieran McKeown and Gareth McMurray while Petso Cannon was also an impressive performer. The Donegal Town side had veteran Eddie Gallagher back in action, although it was a cold day to be a winger.
There was an unusual moment early in the game when Gallagher became probably the first ever Mountcharles man to apologise to a referee when he said 'Sorry Sir' after he was cited for a high challenge!