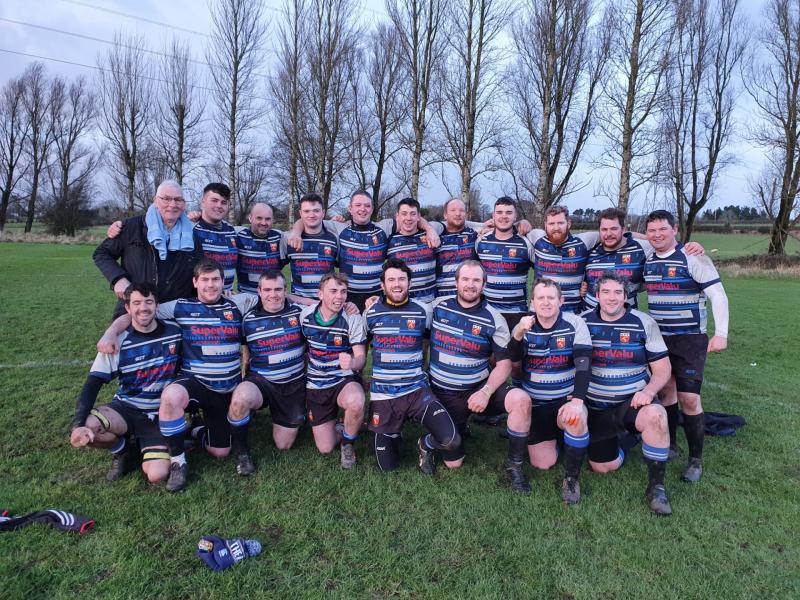 The Inishowen squad who won in the McCambey Cup on Saturday

Inishowen booked their place in the next round of the McCambley Cup with a fine win on the road against Academy thirds on Saturday in Belfast.

The Inishowen men started well and after good pressure and one spurned chance at a try eventually opened the scoring from the kicking tee of Mark Scott with a penalty.

The backs were enjoying the big pitch. And before 20 minutes Dermott McGonagle got the first try with a good run from deep. It was converted which made for a 10-0 lead.

Inishowen remained in control but failed to add to their good start. Academy were reduced to 14 men then for a dangerously high tackle on McGonagle, but if anything they were a better team after this. Scott was next to score by touching down, which he converted for 17-0.

The next try came when McKeague offloaded and Byrne used his pace well to score from distance. Academy got a try before the half-time whistle when their 13 took advantage of a few missed tackles and scored a try, which he, if not the team, deserved. At half-time Inishowen were 24-5 in front.

Inishowen soaked up a lot of pressure in the opening 10 minutes of second half but as had been the case all season their good defence made it difficult for the opposition.

The game was put beyond doubt when good work from McGonagle led to an overlap which Jackie Doherty saw and unselfishly set up Niall Diver to walk it home, 29-5.

Enda Callaghan nearly got in on the scoring with a good charge down but the whistle had gone. Inishowen still had time to pick up two yellow cards in the closing 15 minutes but the game was safe at this point.

On a day when the backs showed their quality especially Jackie Doherty, who had a fantastic game and deserved his man of the match award. The forwards put in a good afternoon rucking and counter rucking showing what a well drilled side this team has become.

Next up is a trip to Letterkenny for the seconds on Saturday before the firsts travel to Ards the following week.