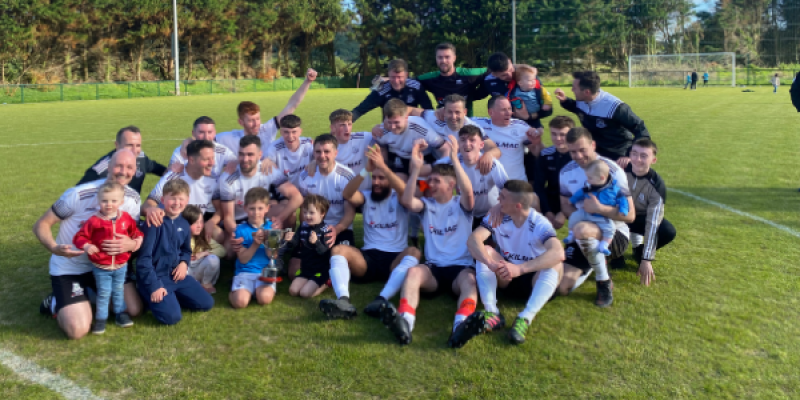 Gerard McGranaghan has done a u-turn on his decision to step down as manager of Donegal League Premier Division champions Kilmacrennan Celtic.

McGranaghan guided the Lurgysiders to a dramatic title win in May as Kilmacrennan defeated Bonagee United 3-1 in a play-off at The Diamond Park.

In the immediate aftermath of that win, McGranaghan indicated that he would be vacating the post after three seasons.

However, in recent weeks Kilmac’ have persuaded the Raphoe native to maintain his presence in the dugout as they embark on the defence of their crown.

There will be few changes in the top flight for the 2022/23 season with Raymond Foy and Jamie Doherty the only two new managers at the moment, although Glenea United may also change the guard in Glasserchoo.

Ronan Curtis could be set for Portsmouth exit

Former Finn Harps midfielder Foy will be at the helm of Castlefin Celtic.

Foy assumes control from Kieran Brennan at Castlefin who were Premier Division champions in 2019.

In 2021, Foy had to hang up his boots following the discovery of a heart problem. A bicuspid aortic valve and dilated ascending aorta meant that Foy, who was the joint captain when Castlefin won the 2019 crown, had to end his playing career.

Doherty has taken the reigns at Cappry Rovers following the departure of Paddy McNulty, who guided the club to Division 1 and Premier Division titles.

The 2021/22 Premier Division runners-up, Bonagee United, have confirmed that Damien McClafferty will stay on as boss at Dry Arch Park.

McClafferty goes for his sixth season at Bonagee, who won the Brian McCormick Cup last season. Bonagee took the title race to a play-off, but lost out to Kilmacrennan Celtic at The Diamond Park.

Shane McGinty will again be in the hotseat at Kildrum Tigers. McGinty, who last week was unveiled as a player at Ballinamallard United, took over at Station Road Park from Shane Browne in 2019 and will continue to guide the St Johnston side.

Arthur Lynch continues as manager of Fanad United, who are back in the Donegal League Premier Division again.

Fanad won the Temple Domestic Appliance Division 1 last season and Lynch, who has been manager at Traigh-A-Loch since 2015, continues as boss.

St Catherine’s won automatic promotion from Division 1 last term. Christopher Murrin and Shaun Kelly have stayed on as the management team with Premier Division football returning to Emerald Park after a five-year absence.

Rathmullan Celtic are also making their return to the top flight, having overcome Donegal Town 4-3 in a relegation-promotion play-off. Rathmullan have retained Eamonn Sheridan as manager for the 2022/23 campaign. Patrick Patton, Terry McAuley and Enda Sheridan are also on the managerial ticket at Flagpole Park.

Glenea United, who finished seventh last season, have yet to signal their intentions. Kevin McFadden has been in charge at Páirc Joe in recent seasons and an announcement is anticipated soon from the club.