John Martin announced as Cnoc Fola Person of the Year 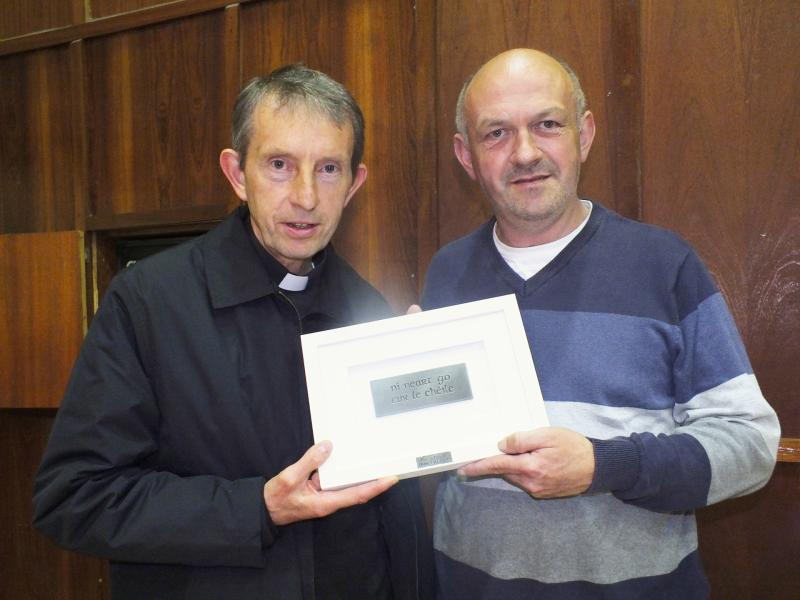 John Martin Róise O’Brien is the Cnoc Fola Person of the Year for 2017.

Fr. Donnchadh Ó Baoill, C.C., Cnoc Fola made the announcement in Ionad Pobail Chnoc Fola. A man of great energy the title was bestowed to him for his sterling service to the area spanning many years. John Martin was visibly shocked when the announcement was made.

Fr. Donnchadh said that John Martin O’Brien has devoted endless hours to the local St. Colmcille Church. He is an enthusiastic worker in and around the church. Fr. Donnchadh said he attends every funeral and he ensures that that everything is in order for the funeral mass.

For many years John Martin has been involved with the weekly bingo in the local community centre. He also helps out collecting the church envelopes and he is often seen outside the church gate directing traffic.
Fr. Donnchadh paid glowing tribute to him for all his assistance and added it was a great honour for himself personally that he was named the 2017 Person of the Year. To mark the occasion Fr. Donnchadh made a presentation to him. He presented flowers to John’s partner Maureen and he congratulated them both.