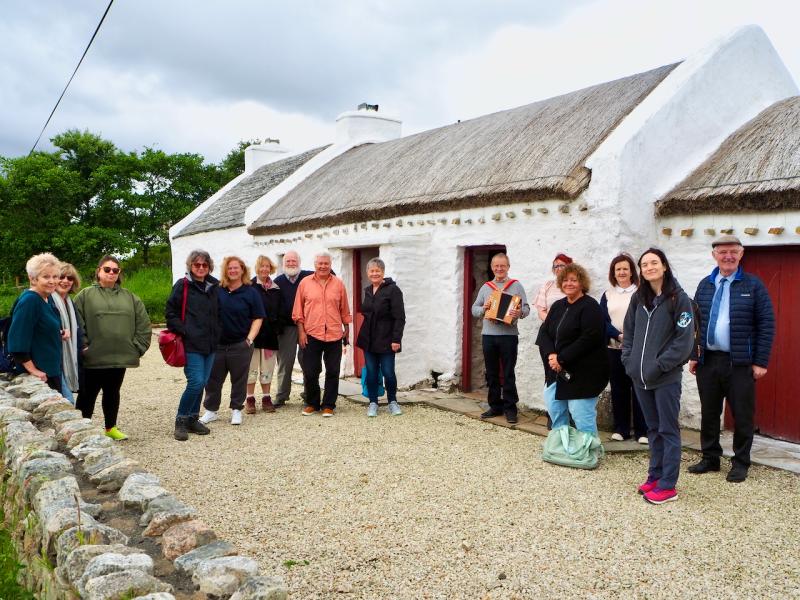 International writers gather at the home of writer and adventurer, Mici MacGabhann

And he’s used his experiences in his award-winning mystery novels and as a tutor this week at the ‘Ireland Writing Retreat’ held at Teac Jack in Gaoth Dobhair, and attended by writers from countries including Germany, the US, the UK and Ireland who enjoyed special workshops and excursions.

“As part of what we call ‘a cultural immersion process’ and to inspire the Muse, participants enjoyed daily practical workshops led by published authors and were brought to key historical and cultural sites,” said Columbia Hillen, organiser of the retreat, now in its eighth year, which also hosts the 'Wild Atlantic Writing Awards (WAWA).'

“They also learned phrases in the Irish language and took part in traditional dancing classes, including sean-nós performed by Frank and Eileen Sweeney.”

Among cultural sites writers visited were the thatched-roof home in Derryconnor, Cloughaneely, of writer-cum-adventurer, Micí Mac Gabhann, who penned the memoir ‘Rotha Mór an tSaoil’ (The Big Wheel of Life) after searching for gold in the Klondike. They  were entertained by Tory Island born musician, Bernard Toland, as well as Inishbofin Island and The Workhouse museum in Dunfanaghy. Participants also enjoyed special traditional food prepared by Kathleen Gallagher of Ciocras.

“We owe a special debt to local community leaders and organisations such as Sile Ui Fhearraigh, manager of Ionad a’Phobail, Machaire Rabhartaigh in Gortahork, Gearoid McFadden at Teac Jack and Inishboffin Ferry Skipper Harry Coll for facilitating our retreat and excursions,” Columbia added.

“Most of the writers have never been to Donegal, some not even to Ireland, so it is a golden opportunity to show them the region’s rich culture to gain international publicity and attract more visitors to boost tourism in the region.”

Brad Harper, a former Colonel in the US Army for 37 years, is author of novels, ‘A Knife In The Fog’ and ‘Queen’s Gambit.’ Brad, a lifelong fan of Sherlock Holmes, worked in the Pentagon and is also a screenwriter.

Other workshops were hosted by Sean Hillen, author and former foreign correspondent for ‘The Irish Times,' who lives in Brinaleck and whose novel ‘Pretty Ugly’ is set in the US and west Donegal. Sean’s memoir is entitled, ‘Digging For Dracula.’