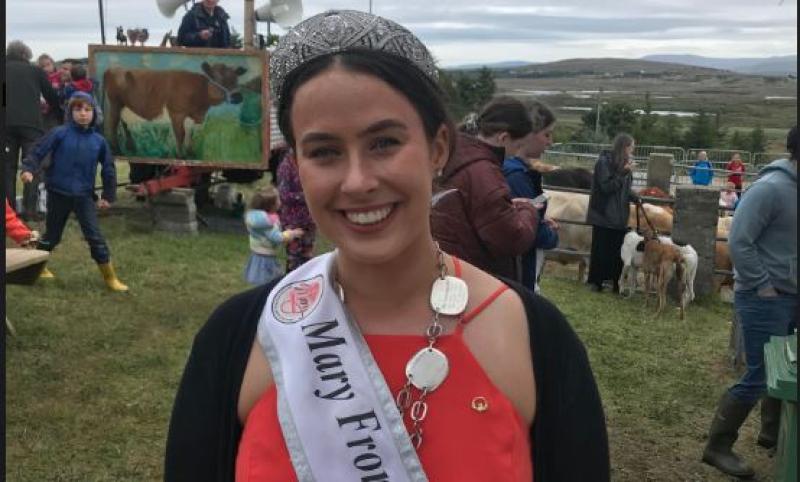 The Meenacross Agricultural Show is a hive of activity as the newly crowned Mary from Dungloe makes her way from field to field under a soft summer sky.
Guided by Mary Rodgers, the London Mary, Caitlin Finn, hurries towards competition finals to pose for photographs amidst a range of farm animals. The PRO for the Mary from Dungloe International Arts Festival, Mary Ward, sits on a bench and looks on.
The flurry of activity is something the new Mary from Dungloe may have expected having worked closely with the festival three years before the pandemic, in 2017, 2018 and 2019. On those occasions, it was Caitlin who would photograph the Marys and various other people at events running ahead to catch the perfect shot or waiting for light to change in an effort to properly frame a profile.

Tightly contested competitions in many categories at the Meenacross Agricultural Show
Caitlin was born in London and her family moved to Ballybofey when she was a toddler. Later they moved to Letterkenny. Her mother Claire McGinley is from Letterkenny and her father Kevin Finn is from Ballybofey. Her younger brother Oran is a leaving certificate student at Loreto Milford, while her younger sister Hannah is going into fifth class at Woodlands National School.
It was in the town she made wonderful friends, some of which are especially dear to her - those she attended Loreto Letterkenny with. She misses her friends while in London and recalls the lunchtimes of her final year when the girls would saunter down town and enjoy the craic rambling past Market Square and going up the town.
During the festival, Caitlin was delighted to receive messages of support and delight from her friends when her name was announced as the 2022 Mary from Dungloe. Caitlin sat her Leaving Certificate in 2019 and moved to Twickenham to St Mary’s University to begin her primary teaching degree. She graduated on July 20, 2022. During her tenure at the London-based university she made history becoming the first-ever female student Vice President: “My job involves organising events and representing the views of the students and making sure their voices are heard and represented in the university.”
The Students’ Union runs campaigns during the year to inform and educate people in relation to issues, such as, sexual assault and harrassment, mental health and other issues affecting the student body. The work will prove challenging and invigorating for the energetic young woman who hopes to see the Mary from Dungloe Festival have a more prominent stage in the London area.
“We are talking about getting a London selection centre in place and having a more prominent committee to really publicise the Mary from Dungloe Festival and Dungloe and Donegal, in London, because the Irish community over there is so strong and there is definitely a want and a need for it,” she said.


Describing the last number of days as an ‘absolute ball’ Caitlin is to the fore in encouraging people to enter the festival in the coming years: “We were treated like royalty and felt like it and I would just like to thank everyone who helped or supported us in any way. We just had the best time. I would like to thank everyone who contributed in any way to making the festival the success it was,” she said.
Ms Finn said the last week has been the best week of her life, to date: “I know everyone says it every year but it is the only way you can describe it.”
As a soft drizzle falls across the green fields in Meenacross, Caitlin recalls the moment when her name was announced from the night before: “When Daniel said the capital, I said to myself who is it going to be? I had no clue. So, yeah, happy, very happy. We would all have been so genuinely delighted for one another. The girls were all absolutely fantastic and we all had the best week.”
This week, the 21-year-old graduate returns to a week-long conference in Essex and next Monday returns to her office.
ADVERTISEMENT - CONTINUE READING BELOW