New musical ‘At The End Of The Day’ at Killybegs and Kilcar, this weekend 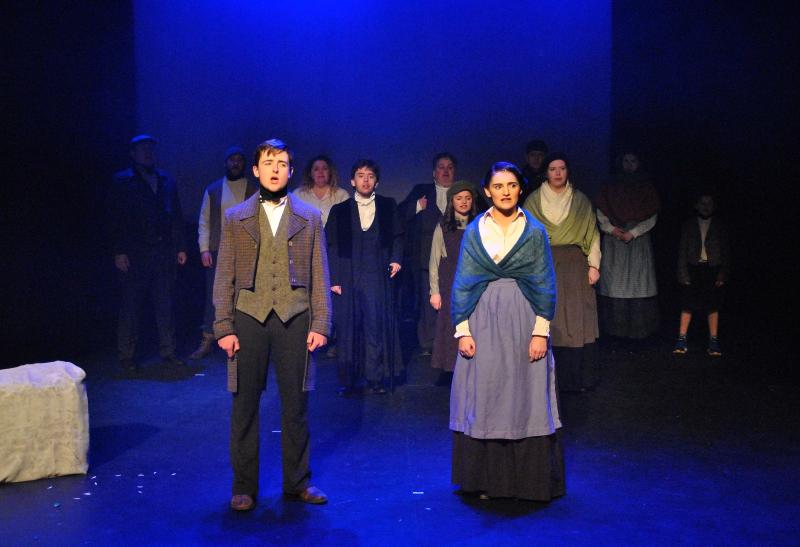 Adam Hannigan plays the role of Mathew Lyons and Éabha Gallagher is Nuala Green, in Leslie Long’s new musical, ‘At The End of The Day’,

‘At the End of The Day’ is a sparkling new musical, written by well known Dunkineely musician and composer Leslie Long, which can be seen at the  Forester's Hall, Killybegs, on  Friday, October 5th, at 8.00pm and at Halla an Pharóiste, Cill Chartha on Saturday night, October 6th., at 8.30pm, as part of the on-going Donegal Bay and Blue Stacks Festival.

The new work is based on a love story from the late 1800s, between Teelin weaver Matthew Lyons and Nuala Green from Oileán Árainn Mhór.

In this new version by Leslie’s Blue Wall Theatre Company, however,  the story of the star-crossed lovers begins with the infamous Bruckless Bay Drownings. According to local folklore, the tragic events of the night of February 11, 1813 were caused by storms brewed up by witch, who earlier that day had been refused her regular offering of free fish by local fishermen. It is said that 200 herring boats capsized and up to 80 fishermen, mostly from the communities of Teelin, Kilcar and Malinbeg, were drowned in the event.

Many of the extended Lyons’ family were lost in the tragedy and years later, young Matthew still suffers from a terrible fear of the sea. Which presents the young couple with a dilemma – how can they get Nuala’s parents’ consent to marry, if Matthew cannot travel to the island?

The parts of Nuala and Matthew Lyons are played by Éabha Gallagher and Adam Hannigan, with Catherine Gallagher as witch Biddy Devenney.

Writer Leslie Long grew up less than a mile from the setting of the musical’s opening scene, Darney Pier. His previous work includes a popular and very successful stage musical adaptation of the much loved Séamus Ó Grianna novel, Caisleáin Óir.

Blue Wall Theatre’s performance of At the End of the Day promises to be an event not to be missed.