There was another healthy turnout on what was perfect playing conditions on the Barnhill track.

CLICK ON NEXT TO GO THROUGH OUR GALLERY OF PICTURES

This was the eighth and final outing of a Covid-affected season that kicked off way back in October 2020 with proceedings teeing off at the Buncrana Municipal Golf Course.

The winner of that first outing was Finn Valley College PE teacher, Paddy McDaid, who set the pace early that day and didn’t relinquish his position at the head of affairs for the rest of the season.

Remarkably, this was Paddy’s fifth time winning the much-coveted title and is testament to the consistency he shows each year. Congratulations Paddy. 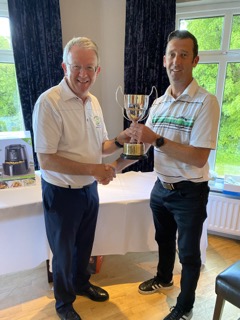 The other big award in the Society’s season is the Magnificent 7 Signature Hole Trophy. This competition involves the cumulative scores gained over the course of the season at ‘Signature’ holes chosen by the Captain at each outing. This year’s winner was Moville Community College’s Ryan Monagle who secured the win with an excellent par at the 15th hole in Letterkenny. Congratulations Ryan.

Winner of the Captain’s Prize on the day was Coláiste Ailigh’s John Bosco Gallagher who came home with a fine score of 37pts that included a couple of birdies on the tough outward nine.

Gairmscoil Chú Uladh’s Kevin McDevitt crowned a notable first season in the society with the runner-up spot with 36pts just pipping Deirdre O’Toole of Donegal Sports Partnership into third on a break of tie with Alex Harkin close behind in fourth on 35pts.

No safety net now as Donegal and Armagh joust again

The prizes were presented in the clubhouse after a delicious meal in Hunter’s Bar & Grill. Outgoing Captain, Jim McGlynn, who was joined by his wife Frances and other invited guests, spoke of his pride in captaining the society that he helped found over 30 years ago.

He thanked all of those who helped in any way during his year at the helm and his final task was to announce the name of the incoming Captain for the 2022-23 season,  Cathal McGee from the Donegal ETB Letterkenny Training Centre. Best wishes to Cathal for the incoming season which will begin again in September.