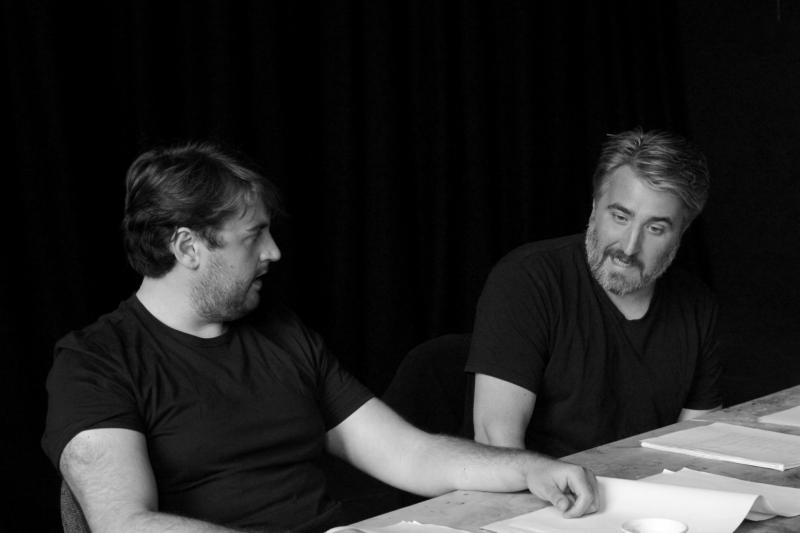 Sean Donegan, right, rehearsing with co-star Brendan Quinn for Nutcase by Colin Bateman which will run at The Playhouse from August 24 to 29

Donegal actor Sean Donegan is to co-star in a new play by best-selling novelist and acclaimed screenwriter Colin Bateman which will be on stage in The Playhouse in Derry later this month.

Nutcase is a blacky comic but unstinting journey through mental illness. Running from August  24 to 29, the new commission by The Playhouse explores the relationship between a father and his teenage son, whose life is veering into chaos.

Colin Bateman is the author of thirty-five novels, including Divorcing Jack, Mystery Man and Papercuts. He wrote the screenplay for The Journey (2016), starring Timothy Spall and Colm Meaney, following the development of an unlikely friendship between Rev Ian Paisley and Martin McGuinness as they travel to momentous peace talks; and for Driven (2018), a comic thriller about John DeLorean, starring Jason Sudeikis.  For television, he created the long-running BBC series Murphy's Law, starring James Nesbitt. Bateman’s most recent play, Bag for Life, a one-woman show, premiered at The Playhouse in 2016. In 2010, Colin Bateman was made an Honorary Doctor of Letters by the University of Ulster in 2010 for his services to literature.

While Nutcase is a work of fiction, Bateman’s experiences of mental health issues have informed the writing of a play that contains themes that will be familiar to millions of people.

“This is the most personal thing I’ve ever written - but it’s also universal, because mental health issues are everywhere and growing by the day,” he said.

“But I didn’t want to write something that was po-faced or judgemental, I wanted to write about how families struggle - about very dark times which can also sometimes be very funny.  That’s life.”

From Inishowen, Sean Donegan made his acting debut at The Playhouse playing Romeo in a 1998 youth-theatre production of Romeo and Juliet. He is a drama graduate of Queen’s University, Belfast and then completed the three-year acting training programme at The Guildhall School of Music and Drama, London. Favourite roles since graduating include: The Mad Hatter in Alice in Wonderland (Combarro Productions, site-specific) Camillo in The Winter’s Tale (An Grianán, Letterkenny) Male in Lungs (Workhouse Theatre, Letterkenny), Algernon in The Importance of Being Earnest (Abbey Arts Centre, Ballyshannon), Walker in Three Days of Rain (Balor, Ballybofey), Aegisthus in Electra (Theatre Forum Kreuzberg, Berlin), Rohan in The Factory Girls (Irish national tour) Gottfried in Bremen Freedom (Derry Playhouse), Nick in Who’s Afraid of Virginia Woolf? (Waterside, Derry and national tour) and Tom in The Shadowmen (Sole Purpose, Derry.)

For An Grianán Theatre he has directed The Good Doctor, The Freedom of the City, On the Camel’s Hump and Fiesta. He also regularly facilitates drama workshops throughout the north-west. He is delighted to be joining The Playhouse for this project and is finding fatherhood as strange and wonderful on stage as it is in real life.