Mark and Fiona tie the knot - and Frankie and Margaret are celebrating too! 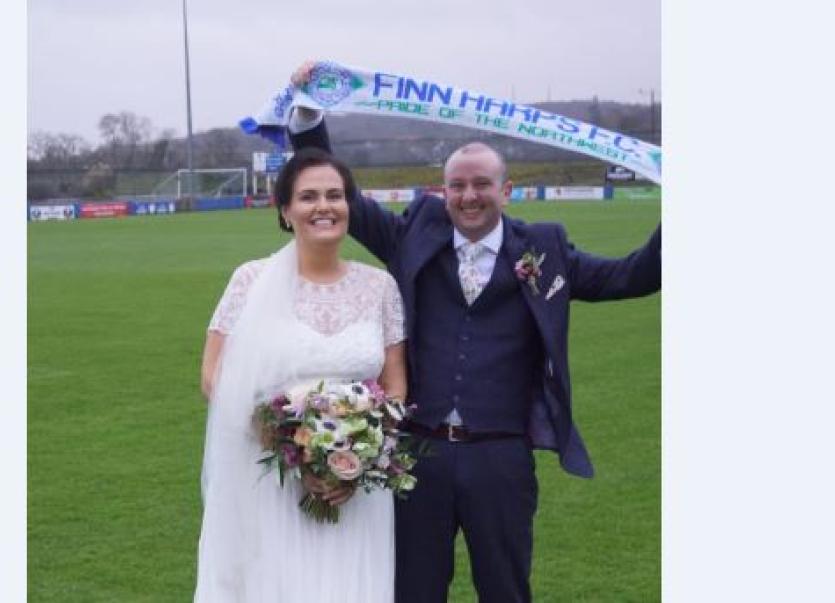 There’s a scene in the online video of Mark and Fiona McNulty’s wedding ceremony when one of the guests watching at home begins to cheer just as the bride says ‘I do’ while making her vows.
It’s not something that would usually happen at a normal wedding.
But you don’t need to tell Mark and Fiona that these aren’t normal times.
This time last year, just when Cupid went looking for his bow and arrow, Covid came on the scene and did his very best to spoil the party.
And this was to be a celebration like no other.
Not only were the Letterkenny couple going to seal their love by getting married on Saturday, March 27, 2021, they’d planned to do so in the company of their family and many friends who would have been so happy to be part of their day.
The fact that Mark’s parents, Frankie and Margaret McNulty, were celebrating their 50th wedding anniversary the very same day, was going to make it all the more special. 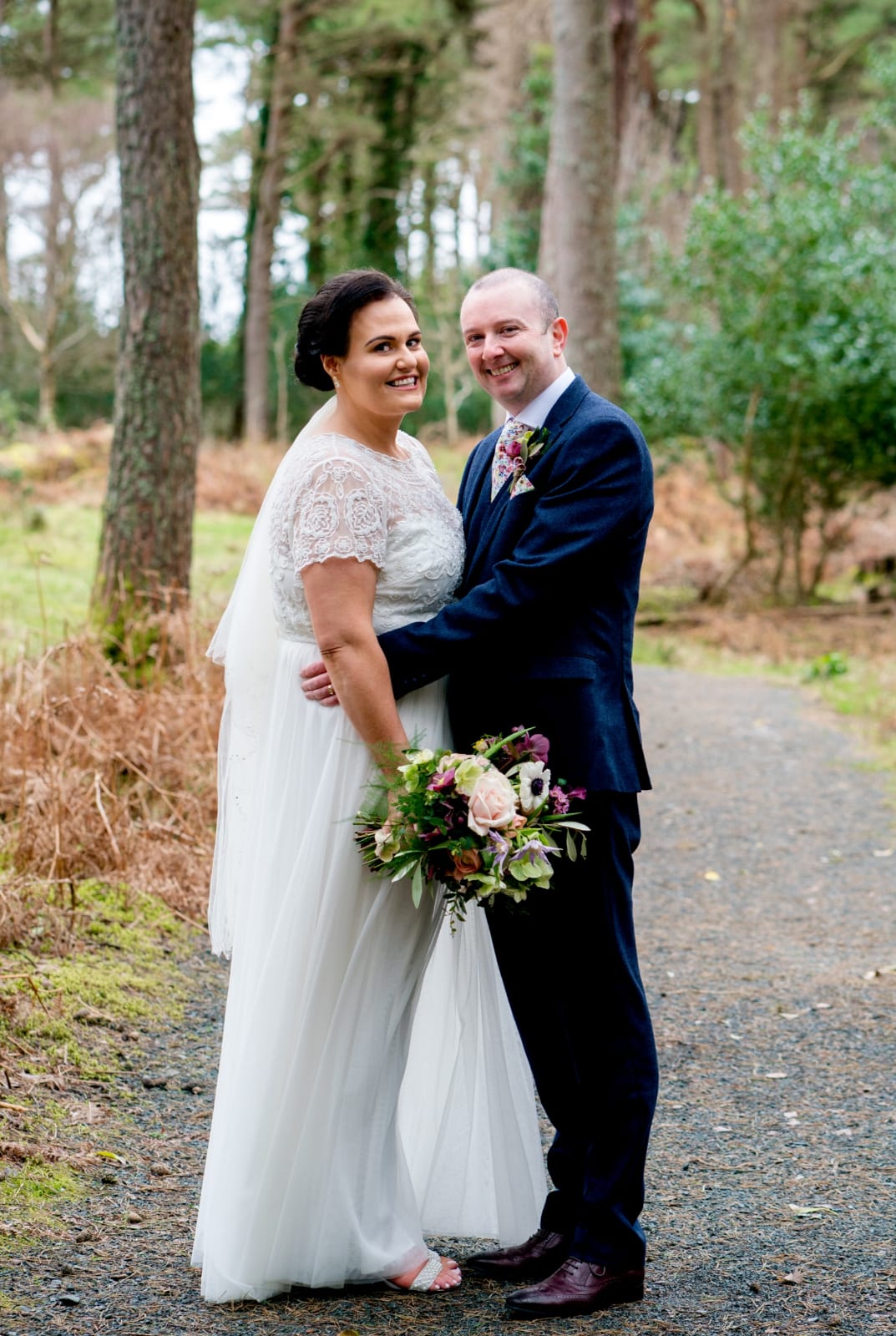 The first lockdown restrictions came into play almost a year before the Letterkenny couple were due to get married.
Back then, in March 2020, Mark admits to being worried about what Covid-19 would bring - even though it was still 12 months out from their big day.
“I just had this bad feeling,” he said.
“People were saying we’d be okay but it never really got much better from that time. If anything in fact, it got worse. If we’d been getting married this time last year, we’d have been allowed far more people at the ceremony.”
Mark, from Convent Road in Letterkenny, and Fiona McDaid from Dooballagh in Letterkenny, got engaged in November 2019 while on holiday in Lanzarote.
The popular couple immediately set their sights on getting married and quickly decided on a date. 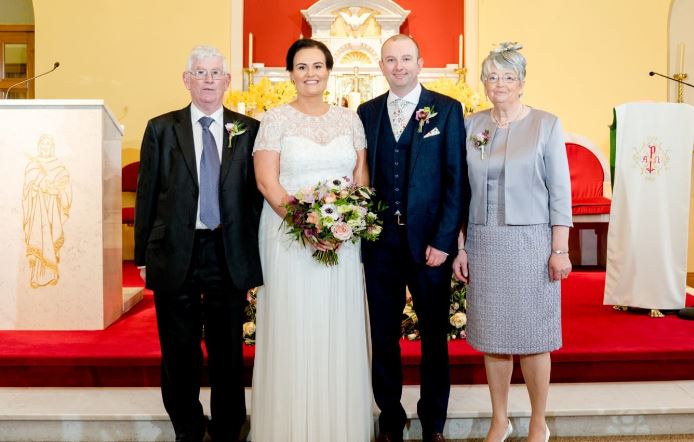 Mark and Fiona on their wedding day with Mark’s parents, Frankie and Margaret McNulty, Letterkenny, who celebrated their 50th wedding anniversary on the same day

Fiona takes up the story: “We knew Mark’s parents were going to be celebrating their Golden Wedding anniversary in March 2021 and we thought it would be lovely to get married that same day.
“When we began to look at the calendar for dates, it turned out the anniversary was going to be on a Saturday, and it just seemed perfect.
“The only problem was that St. Eunan’s Cathedral wasn’t available that day. Frankie and Margaret had got married there back in 1971, and we wanted to get married in the cathedral too.”
But as it turned out, the unavailability of the cathedral was almost the least of their worries. 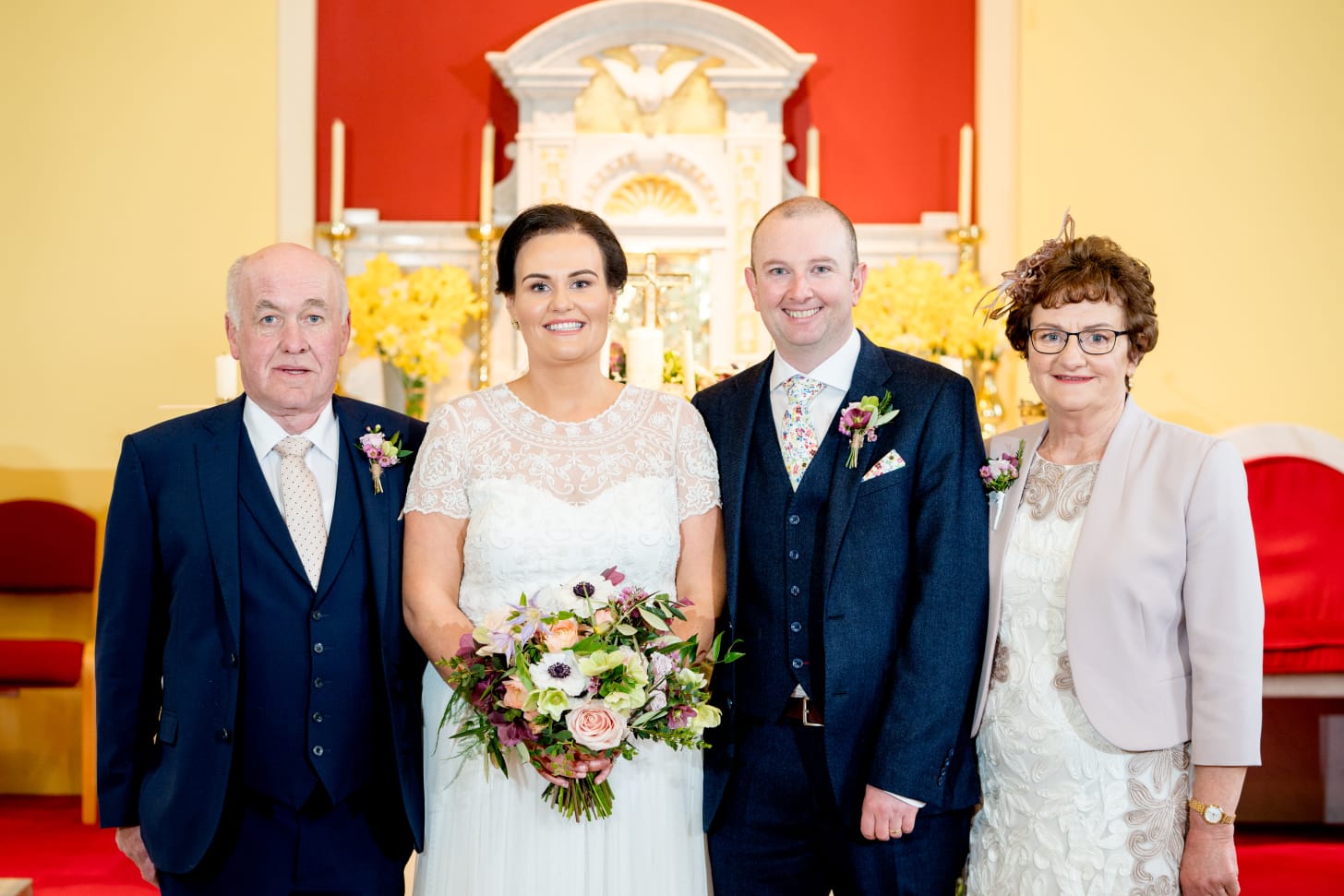 The bride and groom, Fiona and Mark, with Fiona's parents, Rita and Josie McDaid

The arrival of Covid-19, lockdowns and restrictions meant that for the past year, Mark and Fiona have had to deal with so much more.
It was hardly the best preparation for what was to be the best day of their lives. But they were determined that their wedding would go ahead.
“We actually thought that we were a bit mad to be still going ahead with the wedding,” Mark said.
“But practically everybody told us we were so right.
“We could have put it off until this time next year, but when you think about it, a year is a long time. Who knows what might happen in that time.
“We might not have had our friends and so many of our family actually with us on the day, but we knew they were with us in spirit - thinking of us and wishing they were there too.”
The restriction on numbers made it a very different day in so many ways.
Their bridal party was to include Fiona’s two sisters Martina and Pauline and her friend Caitriona McKelvey. Mark’s groomsmen were his friends Karol Harvey and John D Rouse and his brother Kieran McNulty.
Mark is one of eight children - his other brothers are Paul and Ian, and his sisters are Lisa, Amanda, Karen and Ruth. Mark is a director of his own accounting practice, RoMc Business Consultants.
Fiona is finance manager with PGIM. Along with her two sisters, she also has one brother, Shaun.
Add in their siblings’ partners, nephews and nieces, and the wedding guest list would have been filling up fast.
Indeed the presence of the bridal party would have brought the numbers attending way above what was allowed. Because of that, they couldn’t attend.
Instead the official witnesses were Mark’s parents Frankie and Margaret, and Fiona’s mum and dad, Rita and Josie.
The wedding took place in the beautiful Glendowan Church with Mark’s old school principal at St Eunan’s College, Fr Michael Carney, officiating.
Those who couldn’t be there with them were able to watch - and cheer - online.
It allowed Fiona’s granny to be with them too. Nana Kitty tuned in down in Lahinch, Co. Clare the day after she herself was the star of the show on her 90th birthday.
Modern technology also ensured that while there was no bestman’s speech, an online video was put together by the three groomsmen with a certain Ollie Horgan, manager of Finn Harps, also making an appearance.
The Harps connection was a theme for the day. Mark and Frankie rarely miss a home game and have been lifelong fans. Kieran, who lives in Wexford, flies the Harps flag along with his sons Michael and Owen in the hurling stronghold of Kilmuckridge.
And not to be outdone, Fiona, who is also a popular member of Letterkenny 24/7 Triathlon Club, has more than a soft spot for Harps, having been a regular on the Finn Park terraces long before Mark became part of her life.
So it was a lovely touch by bestman Karol to organise a quick visit to Finn Park shortly after the wedding ceremony where the couple got their photos taken out on the pitch. Always on the ball, Karol had even tipped Fiona off beforehand so that she could take a change of footwear.
They were also joined by Mark’s dad in a few of the pics - a claim to fame of Frankie’s being that he once saved a penalty at Finn Park during his goalkeeping days.
After that it was off to the Villa Rose in Ballybofey with both sets of parents.
There they enjoyed a lovely meal and were just about to start to wind down when they were joined by all their immediate family for a specially arranged wedding zoom call.
It was another special moment on a day to remember - and that was when Mark and Fiona got their first viewing of the bestmen’s wonderful video tribute.
And by the time Frankie and Margaret got back home to Letterkenny, there was another special surprise waiting to round off their own wedding anniversary celebrations. 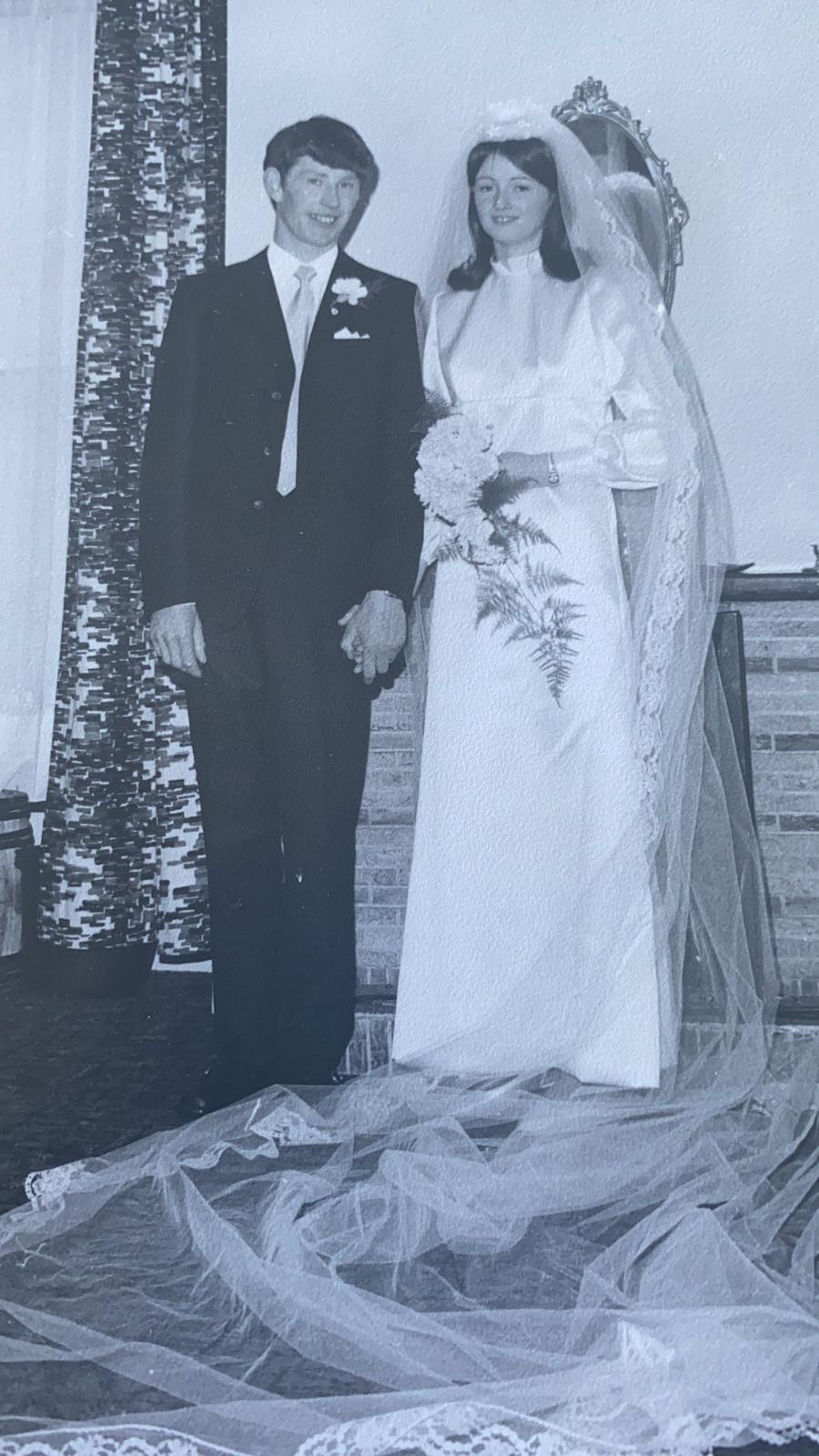 Frankie and Margaret McNulty, Letterkenny - on their wedding day 50 years ago, in March, 1971

The McNulty family had organised a special video presentation of their own with family members, friends and neighbours and even some of Frankie’s former colleagues at An Post in Letterkenny, passing on messages of congratulations.
With the help of a special anniversary poem from Margaret’s sister Pat in Dublin, memories were shared of Frankie and Margaret’s own big day all those years ago. They were married in St. Eunan’s Cathedral on March 27, 1971 with Fr Mark Coyle the chief celebrant.
It brought an end to a day of celebration which for so many reasons, was so very different from what was originally planned.
But Mark and Fiona aren’t done yet.
“We plan to host a blessing ceremony in St. Eunan’s Cathedral on our first anniversary and hopefully everyone can be with us on that day,” Fiona said.
“We’ll have our reception and a big party - just like it was our wedding day itself.
“Believe it or not, I’ve even kept my wedding dress for that day. So many people have been admiring my dress from our wedding, but it’s not my actual wedding dress. I’m keeping that for next year.
“Our friends and our family mean the world to us. We just want to share our day with everyone and hopefully come this time next year, we can do so.”