Their new collection of short stories, 'Wild Atlantic Words', to be launched next week 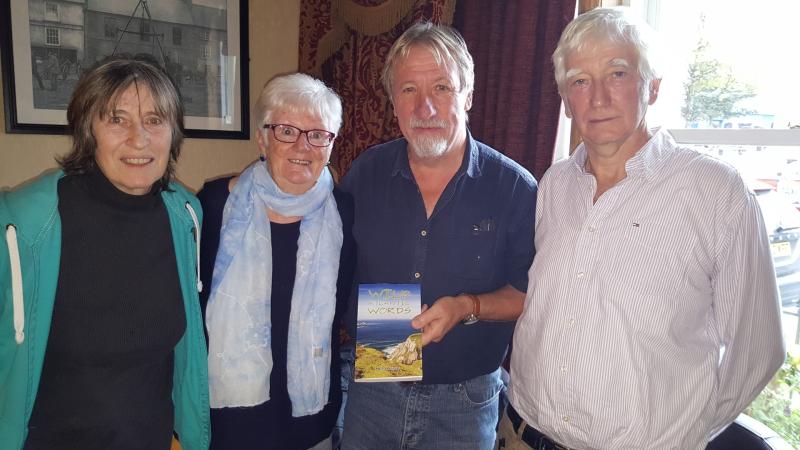 A Donegal writers' group is launching their first book next week with an evening of readings from their new collection of short stories.
MEAS Writers will launch Wild Atlantic Words, their first book published collectively, at 8pm on Wednesday, November 16th, at Manhattan Steakhouse in Donegal town.
"We do a project every year of some sort and we just came up with the idea this year – ‘Why don’t we have a go at that?’” Charlie Garratt, a member of MEAS Writers, said. "And people really jumped on the idea."
MEAS Writers include Darren Gallagher, Ann Garratt, Charlie Garratt, Marie Hannigan, Sally Neary, Clarrie Pringle and Malachy Sweeney. Since 2007 they have met fortnightly in and around Donegal town and Mountcharles to share their stories and develop their craft.
Several MEAS Writers have already published books and stories, but this is the first book they have published together, as a group.
The 21 stories in Wild Atlantic Words, three from each writer, highlight their individual voices and illustrate their deep affection for Donegal, the county that is the birthplace of most of them and a chosen home for them all.
Their stories explore emigration, love, loss, friendship and the supernatural, each telling of people’s lives on Ireland’s Atlantic coast: A pocket watch frees a young girl from an unhappy vocation. Something strange frequents the dance halls of the 1950s. A motorist glimpses giants on a journey through Barnesmore Gap. There are many more, each as different from the other as the writers who created them.
The group sprung from a creative writing class organised by MEAS and funded by Donegal Vocational Education Committee, now Donegal Education and Training Board (ETB). The group have merged their love of writing with their desire to bring the art of the written and spoken word to the public and especially to the asylum seekers and members of immigrant communities that MEAS supports.
In previous years MEAS Writers had hosted a night of readings and music at Donegal Castle and a similar night at the Manhattan Steakhouse. They have also invited authors and editors to hold workshops with them on aspects of writing.
Charlie said Wild Atlantic Words may serve as an inspiration to other groups. MEAS Writers organised their stories for publication over a period of about four months. “We put it out incredibly quickly, actually,” he said.
"It’s nice to get a decent product, working together to produce something like that,” he said. “And you don’t have to be writing a novel to get your work published.”
Charlie urged people interested in writing to find a writers' group that suits their interests – there are a number of active writers' groups in Donegal. Some use prompts each week, providing writers with an idea they write about on the night. Some groups focus on poetry or other particular forms of writing.
MEAS Writers work on their writing outside the group, whether novels, memoir or short stories, and bring their work to meetings. There writers read aloud from their work and other members offer constructive critiques, a method they also used in preparing stories for Wild Atlantic Words.
"It’s important to find a group that suits what you want to do,” Charlie said. “It’s important to find a group you trust.”
MEAS Writers was supported in this project by the Donegal ETB, and Donegal County Council Arts Office has supported the launch event. Democrat reporter Carolyn Farrar worked with the group as an editor.
Wild Atlantic Words is available at Eason’s bookshops in Letterkenny, Four Masters in Donegal town and Novel Idea bookshop in Ballyshannon; and also available in print and ebook format at Amazon, Barnes & Noble and other online retailers.