Welcoming back past members for a festive evening 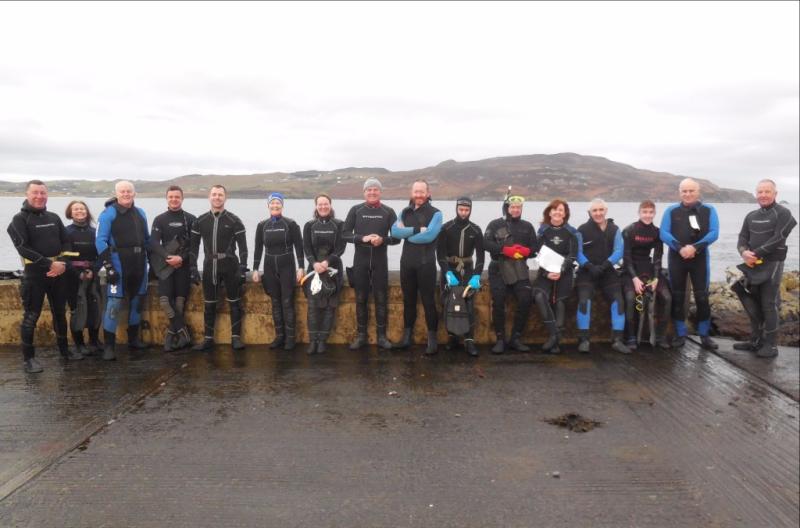 Sheephaven SAC had the highlight of their social calendar last Friday night, when they were the guests of Mulroy Woods Hotel, Milford.
The evening started off with a lovely meal and this was followed with dancing to Trevor Loughery and his band, which allowed the Country and Irish divers to show off their jiving skills with varying degrees of ability.
After the dancing, the annual divers’ table quiz took place, with lots of spot prizes for the runners’ up, with the winners known only onto them.
The evening continued into the wee small hours, with all the stories and reminisces that these events always unleash, not all of which were necessary accurate or even true.
One of more pleasing parts of last Friday’s festivities was welcoming past members back for the evening, and hopefully the memory of the social as well as the diving experience that Sheephaven SAC has to offer may attract them back into the club.
The social side continued on Sunday morning, with the weekly winter snorkel out from Portnablagh, under the very able leadership of Maureen Gallagher, who was the dive officer of the day.
For some of the 16 divers in the water, there was the opportunity to conduct their annual water fitness test, with strict instructions from the club Dive Officer Ryan Ward for the 400-metre snorkel to be conducted in less than 10 minutes and the free dive to no less than five metres, followed by a 50-metre casualty tow.
In-water conditions were near perfect for the week before Christmas, with near flat seas, no wind and clear water visibility, while water temperature around Portnablagh remains around 9 degrees Celsius. Up Mulroy Bay it has been reported by some club members to have dropped to a bracing 7 degrees.
As always, the morning’s activates finished up in Lizzie’s in Dunfanaghy, where the divers took full benefit of the big breakfast and other delicacies that have kept them sustained every Sunday morning during the winter.
Finally, as we prepare for the 2017 diving season and current club members conduct their annual water fitness test and pay their club subscriptions of €410, it is time for past and lapsed divers to remember there is a place for them in Sheephaven SAC.
With more than 100 club dives conducted annually and a friendly social scene, Sheephaven divers also fulfil a vital community obligation when they respond to requests from the Coastguard to provide Search and Recovery duties.
So for anyone who wants to get into water as either a diver or a snorkeler, they should check out the club’s Facebook page, Sheephaven SAC, for contact details and make a New Year’s resolution to join us in the water in 2017.