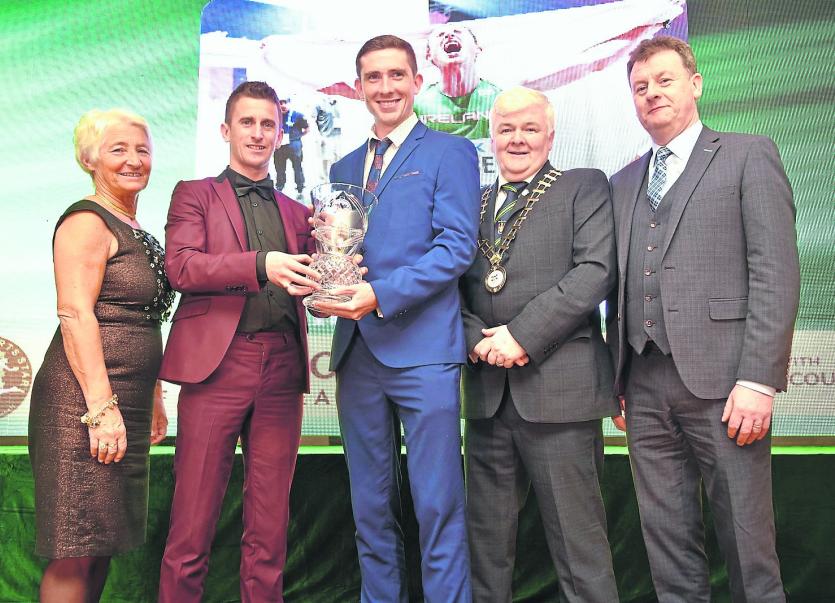 The 2020 Donegal Sports Star Awards has been formally launched by the reigning overall winner Brendan Boyce. The Milford man said it was a great honour for him personally as he followed in the footsteps of the likes of Jim Sheridan, Martin Carney and Myles Gallagher, who have been among the recent special guests to be invited to perform the launch.
And Boyce created his own little bit of history as he was the first guest to launch the brand new virtual awards event that takes place on Friday the 29th of January. It’s the first time in the 45-year history that the Donegal Sports Star Awards will not host a formal function and has had to move on-line due to the Covid-19 pandemic.
“I was delighted to be asked and it’s a great honour for me to launch the 2020 Donegal Sports Star Awards. It was a great feeling to be named the overall winner last year and I want to wish all those in contention for awards all the very best. It really is a privilege to be in the same company of people like Martin Carney and Jim Sheridan who have launched the Donegal Sports Star Awards in previous years,” Boyce said.
Donegal Sports Star Awards Chairperson Grace Boyle said her committee was delighted to have the reigning overall winner as the special guest to formally launch the 2020 Awards. “Brendan has formally launched the awards and he will have that distinction of being the first guest to do it for the new virtual show which we had to do this year because of Covid-19. He’s also the first overall winner to do the launch for us.
"It’s been a very difficult year for everyone and hopefully now 2021 can bring us back to some form of normality. But, it is so important that we adhere to all the HSE and Government guidelines as the coronavirus poses a massive risk and is putting our healthcare system under serious strain. One again I would like to thank very much Donegal County Council for being the exclusive sponsors of the Sports Star Awards. I would like to thank Seamus Neely, the outgoing Chief Executive for being such a strong support to us and we look forward very much to working now with his successor John McLaughlin,” Ms Boyle said.
The Cathaoirleach of Donegal County Council, Cllr. Rena Donaghey said she wanted to acknowledge the outstanding work and the extraordinary lengths that the Donegal Sports Star Awards committee had gone to, in preparation for the 45th Annual Awards. “Covid-19 has presented many challenges throughout 2020, unimaginable this time last year. I commend the committee who have confirmed the new format for the 2020 Awards. Due to the continued challenges, there won’t be a formal presentation function. Instead, a virtual awards show will take place.
“I believe the Committee made the right decision in line with the present situation with Covid-19. Annually around 600 people would attend the awards function. Protecting the health of our people is the number one priority, therefore, sacrifices have to be made.
"I want to thank all the sporting organisations in Donegal, who worked so hard to adhere to the restrictions and still ensured that almost all the competitions in the county were completed. I am delighted that Donegal County Council is again the main sponsor of the prestigious event and the new Virtual Awards will give us all something special to look forward to at the end of January” Cllr. Rena Donaghey said.
Due to the impact of Covid-19 the 2020 Donegal Sports Star Awards will feature a reduced number of categories but there was still an amazing amount of success in the County and that will certainly be reflected in the calibre of winners on the 29th of January.
Grace Boyle says despite the lockdowns there has still been plenty of competitions completed and decision to proceed with the awards has been warmly welcomed and the sporting public is looking forward to the new virtual format.
“We will have a reduced number of categories in line with the amount of sport that took place last year. There has been a lot of success for women, men and teams so it’s a case now of finalising the winners in the next couple of weeks. It’s been really great to continue with the awards and recognise those who did achieve in 2020.
"Finally I would just like to thank my committee who have adapted and done great work in a different way with almost all our meetings being held on-line due to the restrictions. So, we’re just inviting the people of the County and the Diaspora to tune into the Donegal Sports Star Awards Facebook Page on Friday 29th January from 7.30 when all the winners will be announced."

Boyce will always treasure top award
Nearly a year on the overall winner of the 2019 Donegal Sports Star Awards has again expressed his pride at receiving the top honour. As the committee finalises arrangements for the first ever virtual awards Brendan Boyce is encouraging the county’s sporting public to be part of the virtual show which will be streamed on-line via the Donegal Sports Star Awards Facebook page on Friday the 29th of January.
Boyce says being named the best sports person of the year in Donegal is something that he will treasure for the rest of his life. The two-time Olympian scooped the top award after a fantastic performance at the World Race Walk Championships in 2019.
“It’s been a very difficult year for everybody but to have the Donegal Sports Star Awards still going ahead is a really positive thing. I will always be very proud of getting the overall award and I’m looking forward to watching the presentations online at the end of January. The committee has been doing great work every year and to see them being able to organise the 2020 awards in the middle of Covid is just a credit to them. It gives everyone with an interest in sport something to look forward to at a time when there is almost no competition happening in the country,” Boyce said.
When he looked at the list of previous winners in the decade from 2010 like Karl Lacey, Jason Quigley, Mark English, Manus Kelly and Donall Barrett, the Milford man is in no doubt that being named the 2019 overall winner was a huge achievement. “When I saw the names of some of the previous overall winners I realised just how difficult it is to get that award. I have been nominated and won the athletics award a couple of times.
"I remember being there in 2012 which was the first time for me and it was a great event. What I have really liked about the Sports Star Awards is not just about GAA and soccer it’s the variety of sports that are being recognised. There has been a real boom in so many sports which is great. Winning the overall award last year was really special for me and to be there in front of such a big crowd made it even better. Donegal has such a great pride in sport and the awards give so much satisfaction to the winners because their achievements are being appreciated,” Boyce said.
As well as taking the Overall Award last year the Finn Valley AC member also won the athletics category, a feat that he had accomplished twice previously in 2012 and 2016. Those were the Olympic years when he made his debut in London and four years later represented his country for a second time at the Rio Games.