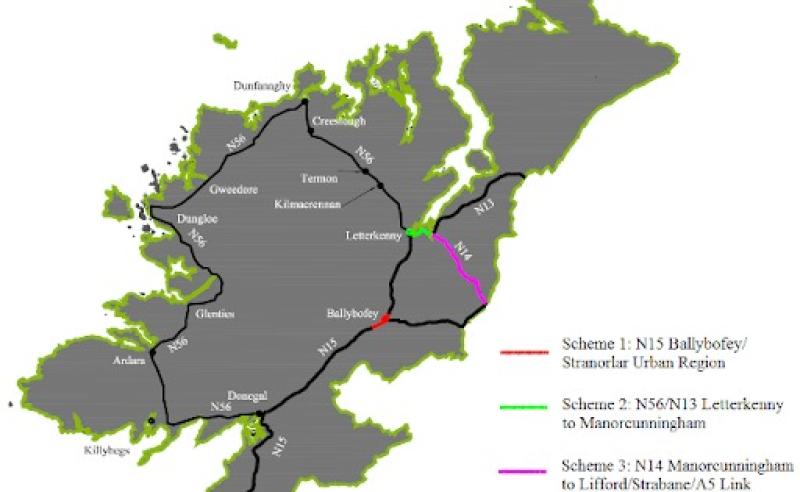 More than 20 homes could be demolished to make way for a new road project in Donegal.

Cllr Donal Coyle has called on Donegal County Council, Transport Infrastructure Ireland (TII) and the National Roads Office (NRO) to “actively, fully and urgently engage with homeowners” who have been made aware that their homes are to be demolished.

He told Wednesday’s meeting of Donegal County Council that the number of houses that could be demolished has increased from two to more than 20. He said this number could increase before the final design is agreed.

“Some people have been aware for more than two years that they could lose their homes,” he said.

“One can imagine the initial shock, pain and anguish that these people experienced when they discovered they were losing their homes,” he said.

The “pain, turmoil and anguish” the families have experienced has been compounded by “little meaningful engagement” with the families.

The Fianna Fáil councillor called on TII and the NRO to engage with the families "in a meaningful way" so a compensation package can be agreed “at the earliest possible date so that people can get on with their lives”.

The motion was seconded by Cllr Liam Blaney (FF) who said the families have been “left in limbo” almost three years after being told their homes would be demolished. He said nothing has been done as funding has not been released for the project.

"Funding should be released and they should be compensated," he said.

In response, acting director of roads and transportation Brendan O'Donnell said he knew from personal experience that telling people their house is marked for demolition is not an easy conversation.

He said the design team are well aware of the impact that there has been and there “has been engagement on an ongoing basis”.

A process has been agreed with TII because there is a risk the project might not go ahead for various reasons, he said.

There is agreement that compensation packages can be negotiated and agreed in advance and the land liaison team is hoping to start those negotiations immediately, he said.

Cllr Coyle said the homeowners would be delighted to get into negotiations immediately.