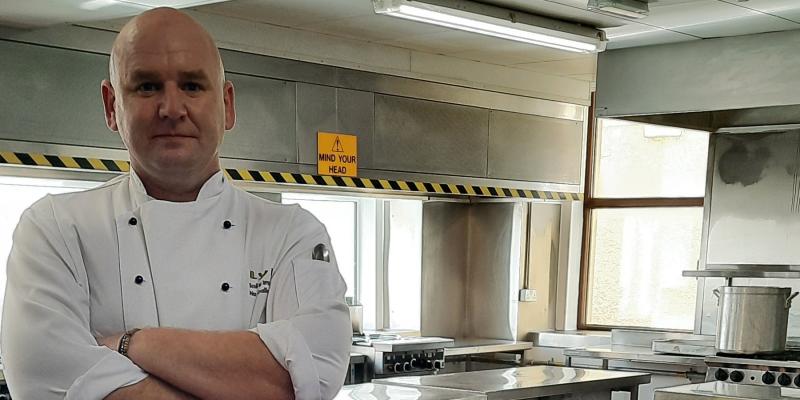 A west Donegal county councillor has returned to college to professional cookery as part of a project which combines his interest in food with his desire to help bring benefits to his local area.

Micheál Cholm MacGiolla Easbuig grew up in a home where he says he was lucky to have great food.

His love of food and cooking came from his mother, who learned her culinary skills from his great aunt who had worked as an in-house chef for a wealthy family in the US.

His interest in food has led to the development of a project to help food outlets in the area put the parish of Annagry on the map as a food destination.

It is hoped that with the development of an indigenous food identity based on local ingredients, fused with the culture of the Irish language, the area can be established as a location known for high-quality food.

The Independent councillor approached local hotelier James McDevitt from the Caisleáin Óir with the idea. Local restaurants, cafes and food outlets have become involved since and a meeting is to take place between them in the coming weeks.

After approaching  Údarás na Gaeltachta and Donegal County Council about the idea, he realised he needed more knowledge about the food industry to drive the project forward.

“When Údarás and the council bought into it, I said to Udaras, ‘I have these aspirations for the area, but I don’t have the knowledge of the industry’.”

For the people in the business locally that he wanted to work with to take him seriously “they had to know that I know what I am talking about”.

It was then that he applied to LYIT at Killybegs to study culinary science.

“Obviously I have personal gain from this because I have an interest in food but the most important part of it for me is to turn Annagry into a foodie destination.”

He is in his second year in LYIT at Killybegs which he describes as “a special, special place”.

The course is fulfilling his aim of preparing for taking the project forward.

“I have a far better understanding of the industry than I did a year and a half ago.”

The project is based not just on food, he says, but also about promoting the identity and culture of the area. In time, he hopes it can be rolled out across the Gaeltacht.

“I am confident this will happen. It is not just about the food - it’s about the service, the knowledge people have about the food and it is also looking at it from an environmental perspective which is about using seasonal food. It is also about working towards a living wage as everyone involved in the industry needs to benefit from it.

“Language will play a big part of - that people visiting know they are in a Gaeltacht when they eat here.”

The project, which is called Blas, is not only focused on attracting visitors, he says.

There are more than 12  food outlets in the area and they all cater to different markets, but the aim of the project is to create an overall food and cultural experience which benefits them all and the community in general.

“The engagement has been fantastic and people have been positive and encouraging.”

The idea is to give the area a food identity, based on local ingredients and especially utilising its location by the sea.

“People don’t travel to west Donegal to the heart of the Gaeltacht on the coast, surrounded by rivers and mountains,  to eat lasagne. There has to be a local aspect to the food. There are fantastic producers here and we have this fantastic resource here in the sea.”