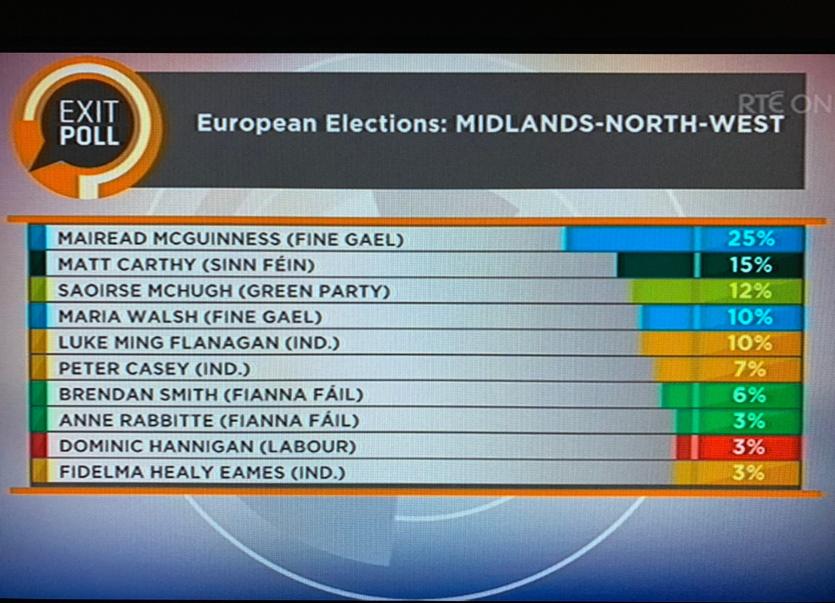 The anecdotal surge of support in recent days for Saoirse McHugh since her appearance on RTE's Primetime programme is reflected in the exit poll which saw her poll third highest behind two outgoing MEPs Fine Gael's Mairead McGuinness on 25% and Sinn Féin's Matt Carthy on 15%, who are both poised to retain their seats.

The prospect of a second Fine Gael seat remains very much a possibility if the transfers from McGuinness go to her party colleague, former Rose of Tralee winner, Maria Walsh, who is on 10%.

If the exit poll figures hold up, Saoirse McHugh will be very much in the mix to capture a seat.

Poll topper five years ago, Luke 'Ming' Flanagan will be disappointed to find himself on 10%, while presidential election runner-up Peter Casey came in at 7%.

There is a 4% margin of error in this RTÉ / TG4 exit poll  but Fianna Fáil's aim to regain a seat in Midlands North West appears to be facing serious challenges.

Brendan Smith and Anne Rabbitte are on 6% and 3% support respectively which doesn't augur well for FF's prospects.

Counting of votes in the Midlands North West constituency begins at 9am on Sunday morning in Castlebar.

Run in the sun: Donegal pair among 30,000 in the Dubai Marathon