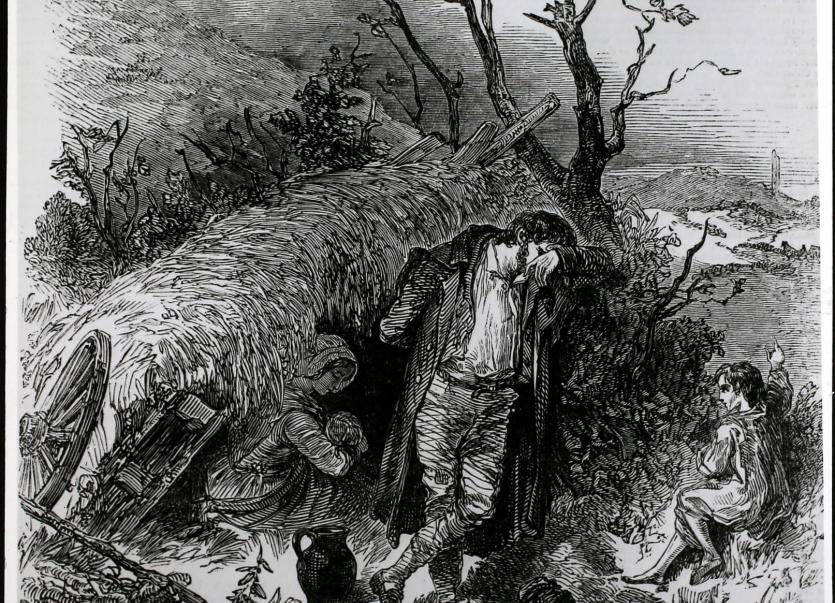 The day after the ejectment - December 1848 - © Hulton Archive _ Getty Images.

From descriptions of the failed potato crop to calls for more sources of employment for starving men, the description of Donegal’s starving have come to light following a new study into Famine Relief Papers from 1844-1847.
The study shows the real-life scale of the destitution faced by Irish people in the lead up to the famine, providing an intimate insight into a defining moment in Irish history.
The Relief Commission and subsequent relief committees around Ireland were formed just prior to the official beginning of the famine to oversee relief efforts, distribute food, collect information and advise the government on the famine, the people and aid efforts.
Soup kitchens were set up, but in 1847 the government shut them down, anticipating a better crop which never materialised.
Another piece of the relief plan was creating government work projects, so that those who were able could earn money to buy food. One million people died
During the Great Famine over 1 million people died, and a further million left Ireland. More than a century and a half later, Ireland’s population had still not returned to pre-Famine levels.
Hand-written letters and documents provide first-hand accounts of the levels of destitution faced by starving people in Donegal.

“Great distress” in Tirhugh, Donegal
Dr John Shiel wrote to the commission regarding the great distress amongst the labouring classes in the Ballyshannon area and the unwillingness of the landlords to provide assistance.
“There is great distress here among the labouring class, and the potatoes are only 3 1/2 per stone, they have not a penny to buy them.
“The landlords are careless and will not give forward. What plan should I take to obtain some relief from government for some public work on road here that would give the poor people employment.”

Complaints against agent of Marquess Conyngham in Templecrone, Donegal
In May 1846 the inhabitants of Templecrone wrote to the commission to issue complaints about their landlords.
“It is more terrible to mediate, how any landlord would continue an agent who could treat the poor tenant in such an inhuman manner as Mr. Russell has done; those unfortunate creatures are ill clad, shoeless, naked within empty walls, without beds, bed-clothes, or furniture of any descriptions, expect a trifle of the very worst quality; generally speaking, they have no office-houses of any sort, cattle, pigs, poultry and must all be in their hovels at night.
“Notwithstanding all this misery and hardship, no attention is paid to their supplications–they may supplicate, but alas, their solicitations are in vain; they are left to the caprice of an unkind, hard-hearted head-bailiff, Robert Russell.”

Great distress in Boylagh, Donegal
On 25 April 1846 Cornelius Ward and Patrick Campbell wrote to the commission on behalf of the individuals of the parish of Templecrone who were experiencing distress again at the hands of Robert Russell.
“Barony of Boylagh states that they are surprised that nothing has been done towards revealing distress in this parish, the people wholly destitute, depending on a few weeks provisions.
“There is no prospect of contributing, Mr. Russell could well be called on his acts of cruelty are daily exhibited.”

Potato blight in Killybegs, Donegal
Alexander Browne, operating from Killybegs, Donegal, wrote to the commission on 1 September 1846 to report the extensive potato blight in the region.
“My real opinion is that there will be great scarcity of provisions in this neighbourhood in the Spring and Summer next and likely half the people will die owing to the rotten potatoes they are now using—I have not a round potato out of 30 barrels; they got so bad that they sickened the cows and horses so much that they would not eat their hay and I cannot use any more.”

A letter from the resident clergy of the parish of Inver
On 27 February 1846 the resident clergy of the parish of Inver wrote to the commission detailing the local distress and the need for public work.
“We the resident clergy of the Parish of Inver County of Donegal desire, through you, to inform the government of the result of a most minute and anxious personal inspection and enquiry with the state of the potato crop in our large and prosperous district.
“We deeply lament to be obliged to state that the disease with which it has pleased God to visit a large portion of the potato crop of this county is now, and has been for the last month making fearful strides in our district, has already to have deprived entire families of their only means of substance and to render it no longer a doubtful matter that my many persons in this, the largest and most populous parish in the district of Raphoe, in less than two months time will be altogether dependant on whatever means government shall think right to adopt in this relief.”
Ancestry’s Joe Buggy commented, “Documents and letters sent to the Famine Relief Commission provide a unique insight into the level of destitution, pain and hunger around Ireland during this time.
“From the collection one can sense the rising panic, with stock and food levels rapidly running out and committees pleading with the commission for help.
“Through the collection it is now possible to search for family names and local areas to see how exactly people were affected by the turmoil of the Great Famine.”
Ancestry is the world’s leading family history site containing the largest collection of family trees with over 100 million family trees from over 100 countries.
In previous years they have completed new research into Irish collections including records of Irish convicts sent to Australia and an interesting look at Irish first names that are becoming endangered.
To search the Famine Relief Commission Papers log onto www.ancestry.ie. The records are searchable by name, date and the county in which they occurred.