Pensioners feel 'trapped' in their homes because of pothole problems 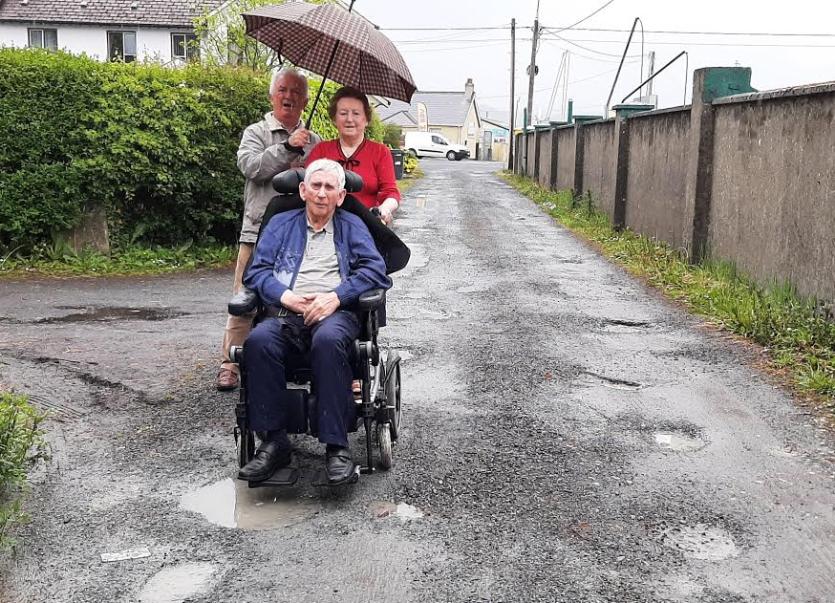 Wheelchair user James Murray with his wife Bridget accompanied by the chairman of the Ard McCarron Residents' Association, Anthony Gillespie

Ballybofey pensioners Bridget and James Murray say they are becoming trapped inside their family housing because of the amount of potholes plaguing their back lane.

James, who is 82, suffered a stroke when he was 54 and has been confined to a wheelchair for the past 28 years.

He and Bridget now feel they are being confined to their home at Ard McCarron on the Donegal Road, because of the neglect of the back lanes which served all the homes in the area.

Several residents have already had their vehicles damaged claiming the neglect has become an absolute nightmare.

“Our back lane is very bad, it's full of potholes and has been that way for years. The council comes along every so often and put that blue dust into it but once it rains it is washed out and the problem returns.

“It's a nightmare taking James out for some fresh air. I have a ramp from the back door to get into the garden but once you get to the lane you get stuck every few feet because of the potholes. It's hard for me to push him along and even when we get into the car, the journey is very uncomfortable and bumpy for him,” says Bridget.

She explains they have to use their back door all the time because of the size of the door on their porch at the front.

“When it was built James was not in a wheelchair. Now it's too narrow to get it out so we're prisoners in our own home - front and back.”

Chairman of the Ard McCarron Residents Association, Anthony Gillespie, explains the ramp at the back door was part of a refurbishment to suit the family's new circumstances.

“The back lane is used by all the houses here but the quality of the surface is getting worse. Many residents here are elderly and own their own homes and are happy where they live but these lanes are ruining cars, splashing dirt on the houses and walls and not fit for purpose at the moment. You may as well pour a bag of flour into the potholes as it would be as good as that blue dust they use at the moment.”

He added he wrote to the council last year and provided maps while explaining the problems but is still waiting for a reply.

“I would like the council to tar the back lanes instead of filling potholes. I can't keep trying to dodge the potholes while pushing James in his wheelchair at my age,” said Bridget.

Local resident Frankie Thompson, left and chairman of the Ard McCarron Residents Association, Anthony Gillespie show the extent of the pothole problem at one of the estate's back lanes

Other locals have also voiced their concerns. Frankie Thompson who lives at the opposite end of the estate  says they have similar problems there too.

“You can be taking your life in your hands going outside for a walk or to the shops, especially for those with walking difficulties or who use mobility scooters. The potholes seem to get bigger and with extra traffic on them it's just causing chaos.”

“I think the people of Ard McCarron deserve to be treated with some respect and dignity. We keep this place looking well all year round, the gardens and green are always tidy and this is a very settled and comfortable community, all we are asking for is some consideration from the council.

Mr Gillespie stressed the back lanes have been used since Ard McCarron was built in 1953, the bin lorries use them every week and over the years the council has serviced them.

“I have been told by the local councillors that the roads and housing sections of the council were at odds as to who had responsibility for looking after these roads - that's all very well but people here are in distress while they are trying to figure out who is in charge. I don't think that shines a great light on the council,” he added.

Donegal County Council was asked to respond to the concerns expressed about the condition of the back lane at Ard McCarron but at times of going to press no response had been received.