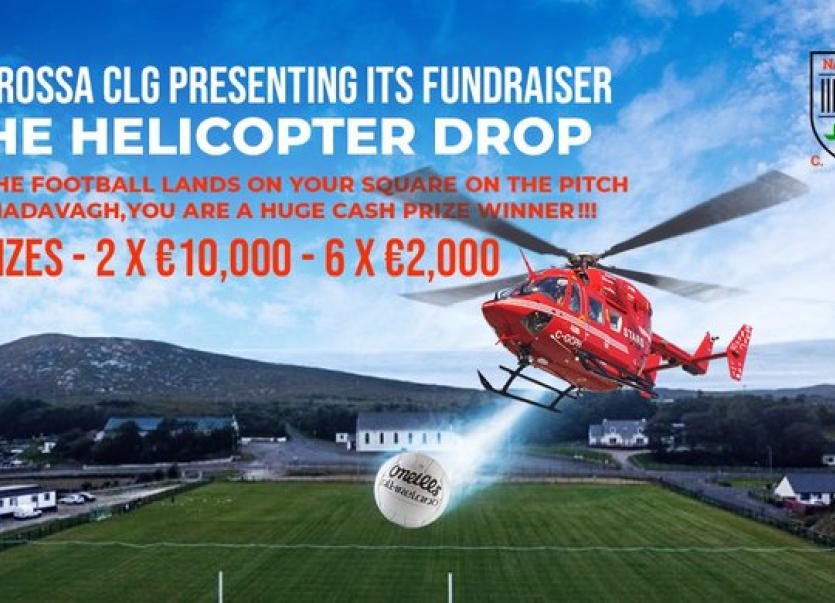 A Donegal GAA club  has come up with a novel idea to raise funds.

Na Rossa GAA club will host "The Helicopter Drop" in aid of the new dressing rooms in Madavagh.

The concept was developed by Felix Melly and Conal Melly and will see a total of eight footballs dropped onto the new pitch. They will be thrown out of a helicopter by a football star yet to be confirmed. If the ball settles on your square you are a winner.

The club has a very ambitious target of selling 3,168 tickets at €50 per ticket to sell with each ticket representing a two metre square on the pitch.

When all tickets are purchased the club will use a computerised randoming programme that will attach each of the 3168 numbers to a square on the pitch.

To sell the tickets the club have put together a 35 strong team made up of locals and ex Na Rossa players/supporters  from all parts of the world to help with the task ahead.

Meanwhile, a promotional zoom will be held this Thursday at 7.00 pm to help launch the event.

In attendance from Na Rossa will be club Chairman and Donegal senior team manager Declan Bonner, pitch coordinator Conal Melly, and technical and social media coordinator Keelin Devenney, to answer questions you may have on the draw.

Na Rossa are in partnership with an online platform called Rallyup where supporters can log on and buy tickets. The link is HERE

Regarding the promotion of the draw local DJ and clubman Tony McGettigan will start weekly podcasts with ex-players starting from 1976 - the year the club was formed - and up to  the present day with players talking about the best 15 players they have played against amongst other related topics.