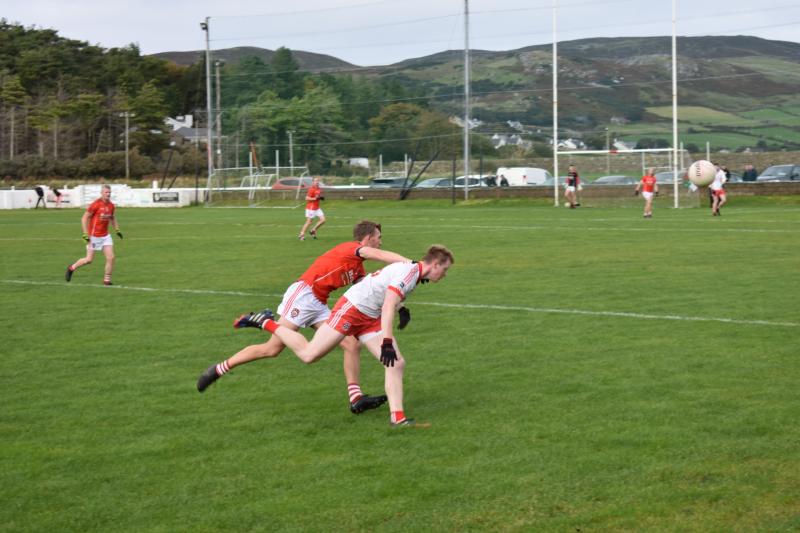 Action from St Michael's and Killybegs at the Bridge today. Photo Moses Alcorn

Tom Comack at the Bridge

St Michael’s booked their place in the last eight of the Donegal SFC with a comfortable win over Killybegs at the Bridge in Dunfanaghy with Michael Langan and Carlos O'Reilly starring.

O’Reilly scored two of the goals and Langan struck the other. The big midfielder ended the game with a personal tally of 1-7, in a man of the match performance, with all but two of his scores came from play.

Christy Toye in only his second start of the season capped a good performance with two trademark Toye points. Hugh O’Donnell landed the other St Michael’s point.

Seamus Og Byrne top scored for Killybegs and the former U21 hit a goal and a point in the second half, while Evan Broderick, Jack McSharry and Conor Cunningham all raised white flags for the Fishermen who lined out without their inspirational midfielder Hugh McFadden.

St Michael’s were without their top scorer in the championship, 2012 All-Star Colm McFadden.

St Michael’s had the look of winners about them from very early. They got off to a great start when O’Reilly palmed a Christy Toye shot off the crossbar to the net after Broderick’s opener two minutes earlier for Killybegs.

St Michael’s, due to a tenacious Killybegs defence, only scored one more point before the water-break. Langan split the posts after being set up by Christy Toye seven minutes in.

Killybegs did have a number of opportunities on the break but all they had to show for their effort was a Conor Cunningham close-in free. The Fishermen lost Cillian Gildea to injury in the middle of the half too. St Michaels led by two, 1-1 to 0-2 at the water break.

The locals really turned on the gas then with Langan, Donegal’s only All-Star nominee, landing two quick points and then struck for the decisive second goal.

He found the net from close range on the half hour mark after the spade work was done by Hugh O’Donnell.
O'Donnell, better known as a defender, was playing in the number 11 shirt for the second week in succession and had another fine game leading the attack.

Jack McSharry, with two fine points one off the left boot and one of the right, managed to keep Killybegs’ hopes up at half-time. They trailed 2-4 to 0-4.

Killybegs had a good third quarter and had St Michael’s six-point half-time advantage cut to three points ten minutes into the second period. Byrne with a well struck goal and Conor Cunnigham free made it a 2-5 to 1-5 game.

But St Michael’s stuck their chests and Langan and Toye struck and the locals were five up again, by the second break.
And they cruised to victory in the closing 10 minutes or so with O’Reilly adding the cream three minutes from the end of normal time.