MCSHEA'S SAY: Donegal are not in free fall or in a downward spiral

In his weekly column, Donegal's 1974 Ulster SFC winning captain Pauric McShea says some of the criticism of Declan Bonner's side in the wake of the draw with Mayo is wide of the mark

Ryan McHugh tries to get away from Ryan O'Donoghue as Michael Murphy looks on. Photo Thomas Gallagher

On Sunday morning I met Donegal midfielder Hugh McFadden on his way to the Mayo game in Sligo. He was travelling with his teammates Oisin Gallen and Jamie Brennan, All three are on the injured list and were unavailable for selection.

After leaving Hugh I reflected on the loss that the boys were to their team. They are excellent footballers who would get a place on any team in the country.

The saga began last August when the deferred final was played, which Martin Regan's side won on penalties against Kilcar

In the Irish Independent on Monday, Eamonn Sweeney suggested that Mayo’s dream of ending the famine is still alive while Donegal’s time is running out. The first half performance by Mayo was arguably the worst performance I ever witnessed by a Mayo team.

James Horan, the Mayo manager, replaced his midfielders Conor O’Shea and Conor Lottus, his centre-back Donnacha McHugh and his centre-forward Aiden Omre during the game, while his full back Stephen Coen was red-carded.

This is the spine of a team and was it an admission that his original selection was very flawed or was it that these players were outplayed by a Donegal team in decline?


Were Donegal so far off the pace when it took an excellent free by the Mayo goalkeeper Rob Hennelly to salvage a draw for his side in the final moments of the game.

Apart from his fine equaliser, Hennelly made two excellent saves to add to his penalty stop from Patrick McBrearty. With rain coming down in stairwells throughout this match, Donegal’s display was on occasions flawed - as was Mayo’s - but both teams deserved much credit for providing a very entertaining game in monsoon conditions. 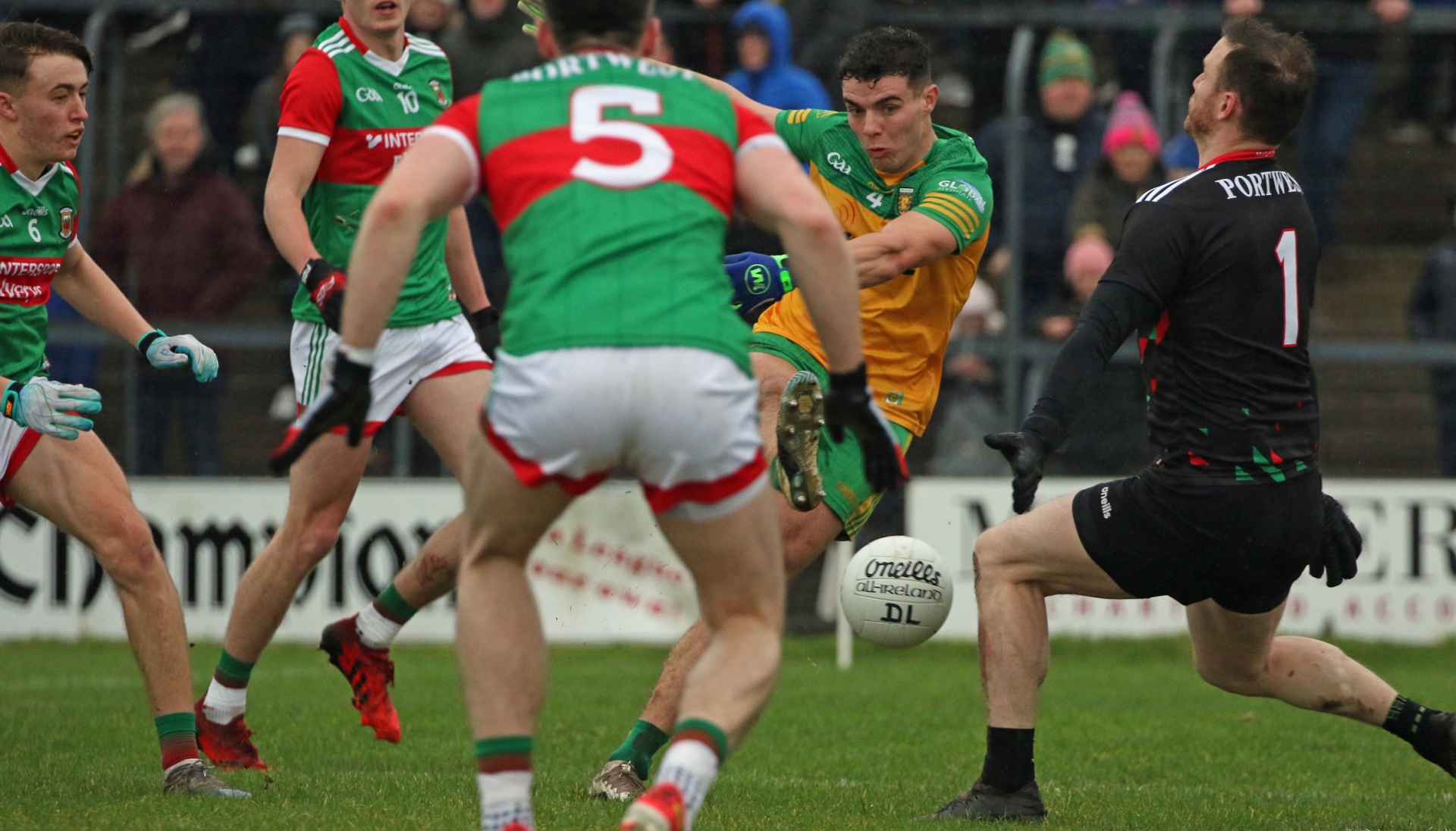 Yet again Donegal captain Michael Murphy played with his customary skill and steel and his talent prevails no matter where he appears on the pitch. Murphy showed the havoc he causes to an opposing defence when he won his team's penalty by appearing close to the Mayo goal.

I sincerely hope that he is selected at full-forward this year where he will win penalties and score match winning goals if he gets even a reasonable supply of ball when playing inside.

Michael Langan and Murphy were two of the instigators of Donegal’s best moments - Langan had a wonderful game and he is now one of the outstanding midfielders in modern day football, while a number of others had reason to be pleased with their outing on Sunday.

Ryan Mc Hugh, despite conditions not suited to his physique played well, Peadar Mogan, who, like Ryan, is small in stature also did very well but I hope that the fact that he is switched around consistently does not affect his game he is very versatile and can do a job in most positions.

Boyle was first elected as Na Rossa secretary in 1982.

Already in his short career he is not unlike former Letterkenny footballer John Hannigan, who was Donegal’s trouble shooter and never got an Ulster jersey because the Donegal selectors sent for him every time a problem position cropped up.

Eoghan Ban Gallagher was most effective both in defence and going forward, while full-back Brendan McCole - even though opposed by Jason Doherty - gave another solid display. 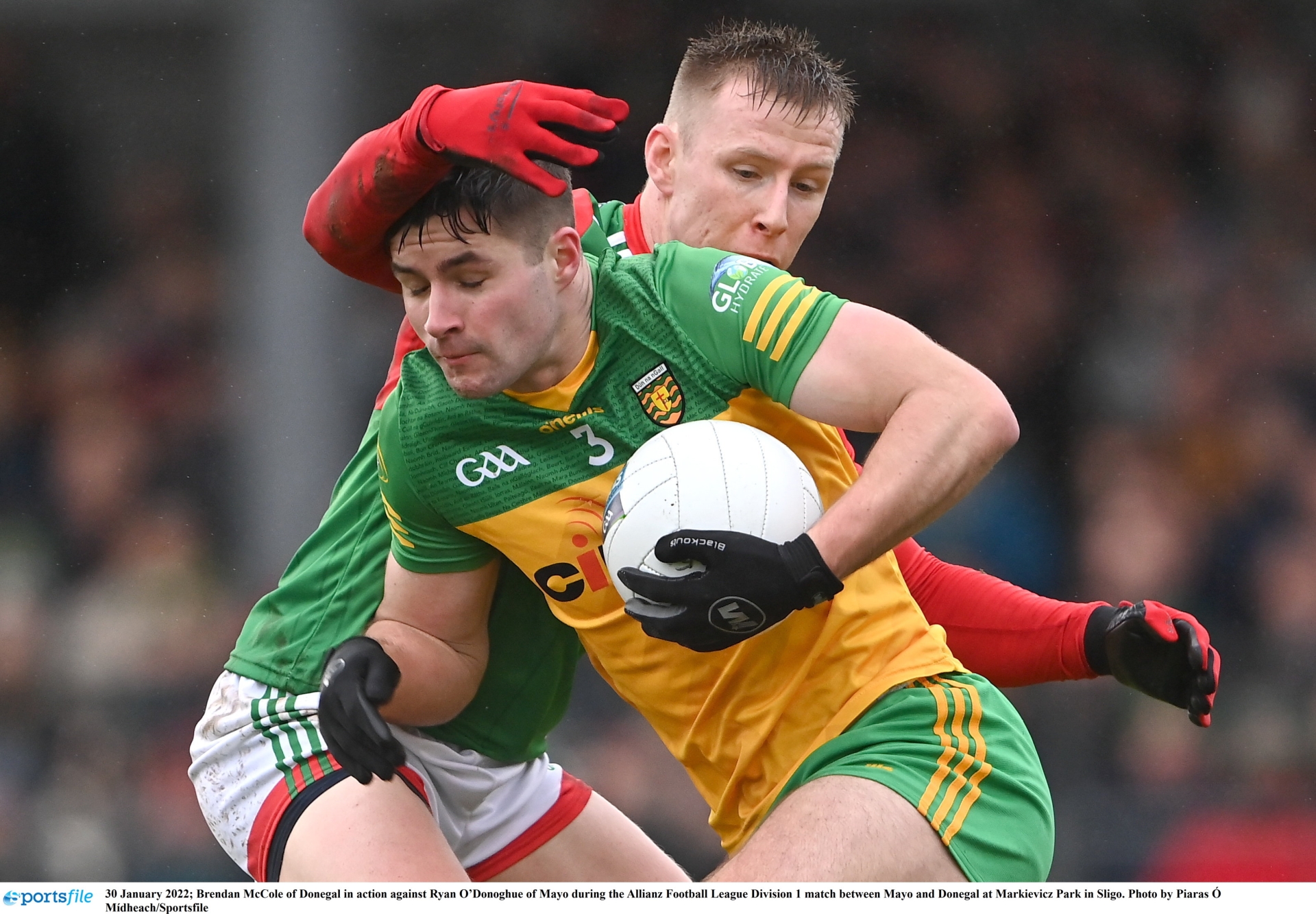 McCole has settled well in this position even when at times his covering defenders have left him isolated in what can be a very lonely place on the park . He also played very well in the McKenna Cup and his confidence has improved significantly this season.

Beside him, Caolan Ward has brought his club form to the county scene and that is good news for Donegal. When it comes to penalties this is a specialist art which must be honed in practice to build the confidence to score consistently from the spot. I believe that manager Declan Bonner should not leave it to his players to make this call and it is an area which requires clarity before the season gets any older.

Kildare showed against Kerry that Division 1 is of a very high standard again this year and keeping the points at home against the Lilywhites this weekend will be of the utmost importance to Donegal.

Our championship opponents Armagh were the team of the weekend when they hammered Dublin in Croke Park on Saturday night. In a great display, Armagh’s tactics were hugely effective but on analysis, fairly simple.

Their backs played very defensively leaving plenty of space for their attack. They have a set of forwards who will trouble any defence.


Their individual flair was not curbed and they seemed to be given licence to express themselves in whatever way they saw fit. At the same time it was a supreme team effort with forwards tackling relentlessly so that no Dublin forward got an easy shot at goal.

Armagh are now a sharp, fit and very hungry team and their game with Tyrone this weekend should be a mouth-watering affair. After watching all four Division 1 games at the weekend I asked a footballing friend what player was most impressive over all four games.

He answered Armagh’s Rian O'Neill, while his second choice was Michael Langan or Michael Murphy, and I did agree with him on all three calls. Not bad for a team in decline!
ADVERTISEMENT - CONTINUE READING BELOW