Ciaran Dowds' Burt continued their excellent form this season with victory in the All-County Football League Division 3 final against Naomh Bríd, who are also on the way up 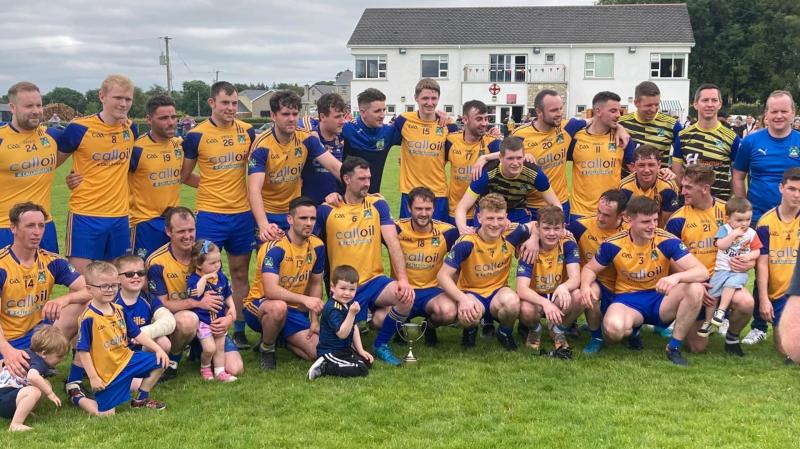 Super sub Ronan McDermott was a key difference in this well-contested All-County League Division 3 final as Burt took home the silverware after their unbeaten season.

McDermott was brought on for Keith McColgan 12 minutes from time and he scored a superb soaring point with his first touch.

He then managed to shovel the ball back to Calvin Gallagher, who hit Burt’s final point in the 60th minute, although  there was a strong suspicion of a throw ball as irate Naomh Bríd reminded referee Jimmy White. Eoin Rush pointed a free for the south Donegal men, who laid siege to the Burt goal as White played 37 minutes in the second half, but the Inishowen men held out for a narrow but deserved victory.

The sides were to meet in Trummond in their last league fixture but with both having sealed promotion opted to play the final at a neutral venue, which turned out to be Killygordon.

Naomh Bríd began brightly in a cagey opening with Gearoid Gallagher very prominent as they eased into a 0-2 to 0-0 lead courtesy of the speedy Ryan Brogan and Gallagher after six minutes.  Burt levelled matters through marksman Calvin Gallagher and the influential full-forward Christopher McDermott. Wing back Gary McCafferty then hit the first of his three points for Naomh Bríd with Gallagher putting them into a 0-4 to 0-2 lead.

Conor Cunningham's side were pushed all the way by Glenfin, who will rue some missed opportunties

McDermott and Darragh Brogan then swapped points and McDermott hit a superb point with the outside of the left boot from an acute angle to put Burt into a 0-6 to 0-5 lead at the break.

McCafferty hit a fine point for Naomh Bríd to square matters on the resumption and that set the pattern for a cagey second half. Liam Óg McKinney put Burt back in front after a fine move in the 37th minute.

And Burt got the first chance of a goal two minutes later when Christopher McDermott got on the end of a lightning move only for Naomh Bríd ‘keeper Pauric McDaid to make a great diving save at his feet.

A goal at that stage might have swung matters, but McCafferty made it all square and Burt captain Stephen O’Donnell put Burt back in front only for Darragh Brogan to tie matters at 0-8 each. It was then McDermott entered the fray and made a real difference to Burt.

But it was a bit strange that Naomh Bríd allowed him virtually the freedom of the park which he thoroughly enjoyed, and it was to Burt’s considerable benefit.

To their credit, Namom Bríd refused to surrender as Sean McHugh and Calvin Gallagher pushed Burt into a 0-12 to 0-9 lead - Gallagher’s point was hotly disputed by Naomh Bríd as Ronan McDermott seemed to throw the ball.

Eoin Rush hit two late frees for Naomh Bríd to leave just two points in the game. Naomh Bríd had close-in frees but were just not able to get the goal they needed as Burt clung on for a just about deserved victory.

And Clint Walsh of Naomh Bríd  and Burt’s Stephen O’Donnell were both black-carded as the game drew to a close. Disappointment for Naomh Bríd on the day but they can be content enough with their promotion, while Burt are still the only unbeaten side in the county in football.