Conor Cunningham's side were pushed all the way by Glenfin, who will rue some missed opportunities 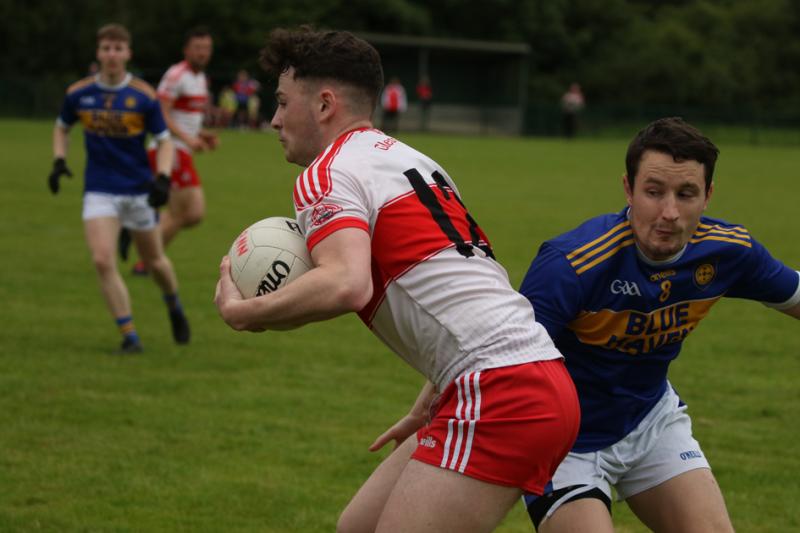 Luke McGlynn of Glenfin moves to get away from Kilcar's Eoin McHugh. Photo: Thomas Gallagher

Kilcar will take on Naomh Conaill in the final of the Donegal All-County Football League Division 1, courtesy of their victory over Glenfin.

They were sorely pressed by a gritty Glenfin side, although one who hit 11 wides and missed two very good goal chances in Pairc Taobhoige. Kilcar knew a point would do seeing Aodh Ruadh picked up the two points as Termon didn't travel to Ballyshannon.

And, the final winning margin flatters the winners who had a third quarter fade-out, where Glenfin got a scrambled goal and levelled matters at 1-8 to 0-11.

But they missed a few good chances to go clear as goal-scorer Jason Marley dribbled his way through the Kilcar defence only to see his shot just shave the post and go wide.

That was compounded as Eoin McHugh put the shaky looking Towney men back in front with a timely point in the 51st minute. Kilcar re-asserted themselves from there to the finish with Patrick McBrearty in brilliant form especially as he was left one on one with his marker for most of the match.

Lively Kilcar were quickly into their stride as the impressive Dara O’Donnell set up Paddy McBrearty for an early point after just two minutes. But the home side had a great chance of a goal in the fourth minute when a lightning move ended with Gerard Ward one on one with keeper Eoin O’Donnell, but the latter made a superb save.

That miss was compounded as Kilcar added to their tally in the sixth minute when the returning Ryan McHugh added a second point as wind-assisted Glenfin struggled to find their rhythm.

McHugh and McBrearty were combining well, and the latter floated over his side’s third point and he added a further free to make it 0-4 to 0-0 by the 12th minute.

Cloughaneely wrap up season with win  at Killybegs

Glenfin were slowly growing into the contest and the precocious Luke McGlynn landed a fine point with the outside of his boot. The home side then missed three good chances of scores as a more economical Kilcar tacked on further points from O’Donnell with Gerard Ward replying for the home side from a free.

Kilcar threw on Mark McHugh, who dashed back from the Donegal Ladies' great victory over Dublin as they led by 0-9 to 0-4 at the break with Eoin McHugh, Dylan O’Gara and O’Donnell all pointing.

Shaun Ward and Odhran McGlynn responded for the home side. Kilcar had the slight breeze after the break but it was Glenfin who dominated the first 20 minutes of that half spurred by a scrambled goal from Jason Marley to leave Kilcar leading by 0-9 to 1-4.

Ryan McHugh and McBrearty stretched that lead out to 0-11 to 1-4, but the momentum was with Glenfin and they hit 0-4 on the bounce from Shaun Ward (0-2), Ciaran Brady and Luke McGlynn to level matters.

But their wides tally mounted as Eoin McHugh and McBrearty (0-3), Andrew McClean and Dara O’Donnell closed out the scoring as the home side failed to score for the final 15 minutes-despite having considerable possession.
And Kilcar’s greater craft saw them through.