McEniff: ‘It's not important where new manager is from’

Seeing he managed Donegal on five separate occasions, Brian McEniff is well qualified to speak on who should replace Declan Bonner as boss of the county seniors 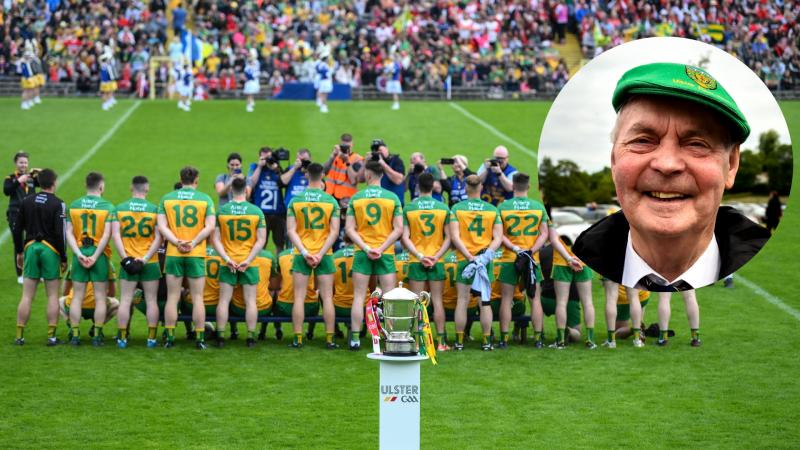 The Donegal panel before this year's Ulster SFC final against Derry and, inset, Brian McEniff

It is important that Donegal take time to get the right manager in place to replace Declan Bonner because the team is in transition and will need careful nurturing, says Brian McEniff, who has had long experience of county management with Donegal.

Donegal’s 1992 All-Ireland winner manager, who had five terms in charge between 1972 and 2005, paid tribute to outgoing manager Declan Bonner this week and also commented on those who used social media to throw hurtful and nasty comments against someone who gave so much of his time to the county.

"I'm glad he took time to consider his future because he still had a year left on his term. It will probably be the last time he will manage a Donegal senior team, but you can never say never,” McEniff said.

"He has given his life to Donegal as a player and manager. I felt he retired too early from playing but he got to an Ulster final in his first term and was only beaten by a last minute goal in 1998."


He then came back in at underage level and came up to through the ranks before taking the senior team to four Ulster finals, winning two, and an Ulster semi-final last year against Tyrone where we lost Michael Murphy. "It is not easy winning Ulster titles, but Declan has given a lifetime to Donegal and to his club Na Rossa."

McEniff feels that county chairman Mick McGrath will be part of the three-person committee and it will be an important job for that committee to get the right man to replace Bonner."

It is a very responsible job and I would say Declan was putting in well over 50 hours a week," McEniff said. "I'm not on social media myself but I heard some of the things being posted are simply not on. As regards possible contenders, McEniff said there was news of a couple of people from outside the county.

Who are the pretenders for the throne of Donegal senior manager?


"The former-Monaghan manager, Malachy O'Rourke's name has been floated. He has a holiday home in Rossnowlagh and I would see him around Bundoran at times. He is a man with a lot of experience. Enda McGinley stepped down from the Antrim job recently and his name is also being mentioned. He was a good player in that good Tyrone team."

“As regards someone from inside the county, which would always be my preferred option if they are available, I think it will be imperative for whoever gets the job, that there is a good back-up team.

"I understand that Jim McGuinness is still going the soccer route but he would certainly come into the equation if he was interested," said McEniff, who also mentioned names such as Martin Regan of Naomh Conaill along with former Donegal underage managers SP Barrett, Gary McDaid and Rory Kavanagh.

"My preference would always be to have someone from inside with a good back-up team, but I would have no difficulty if we get a good man from outside."

With the team in transition we need someone that knows how to rebuild a team and we need to be careful regarding the appointment.”
ADVERTISEMENT - CONTINUE READING BELOW