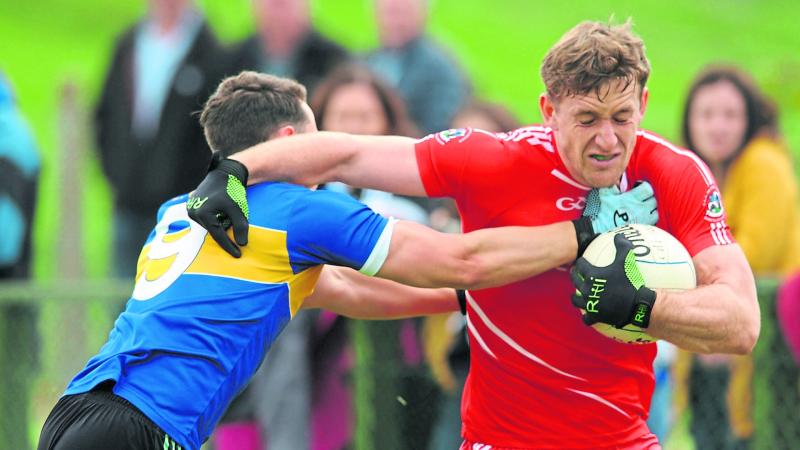 Welcome to the championship - for this was the real deal. In musical terms it was the day the returned Hugh McFadden was both the conductor and the lead singer for an in-tune Killybegs against a typically gritty Glenfin.

The county star was located at full-forward and had the ball in the Glenfin net after just 15 seconds and he finished with a tally of 2-6. But Glenfin argued strongly that he should have been sent off after he came in what appeared to be heavy contact with young Glenfin star Shaun Ward immediately after the latter had landed a fine long-range point.

Referee Val Murray flashed a black card sparking a brief fiery exchange between the two benches as Glenfin were adamant that it should have been a red card.

Glenfin, who were minus Gerard Ward, through injury, were outplayed for long periods and trailed by eight points early in the second half-but an opportunist goal from substitute Karl McGlynn helped them narrow the gap to just two points at the finishing tape beckoned.

But once again McFadden hit a vital point to steady his side and fashion an important victory. The Fishermen had the perfect start when a long ball into the Glenfin square was flicked to their net by McFadden and bizarrely they only hit one more long ball into McFadden-deep into the second half which yielded a 45.

Shaun Ward responded with a well hit free in the third minute and this was followed by the controversial incident with McFadden who was out of action for 10 minutes. Ward and Conor Cunningham, who had a bit of an off day but still hit 0-5, swapped points. The lively Luke McGlynn was on target for the visitors with Cunningham and Ryan Cunningham responding for the home side.

It was point for point until the break as McFadden hoisted over a fine effort to leave Killybegs in front by 1-8 to 0-7 at the break.

Jason Morrow had a fine long-range point for the visitors before McFadden struck with deadly effect in the 38th minute. He hit a fine point a few minutes earlier as Killybegs began to take a firm grip. McFadden gathered a cross from Ryan Cunnighman, held off a hefty challenge before hitting a left footed shot that bounced off the ground and into the Glenfin net. Suddenly Killybegs were ahead by 2-8 to 0-7.


There looked no way back for Glenfin but Ward and Ciaran Brady hit two points on the bounce in reply to McFadden and Cunningham. The game changed suddenly when Gelnfin sub Karl McGlynn gathered a short kick-out from Corey Byrne and he cleverly chipped the stranded keeper to leave the score at Killybegs 2-11 Glenfin 1-11 in the 52nd minute.

The final minutes were quite frenetic as Glenfin tried to steal this encounter. Typically McFadden hit a calming point for the winners who held out for a deserved victory in an exciting finish.