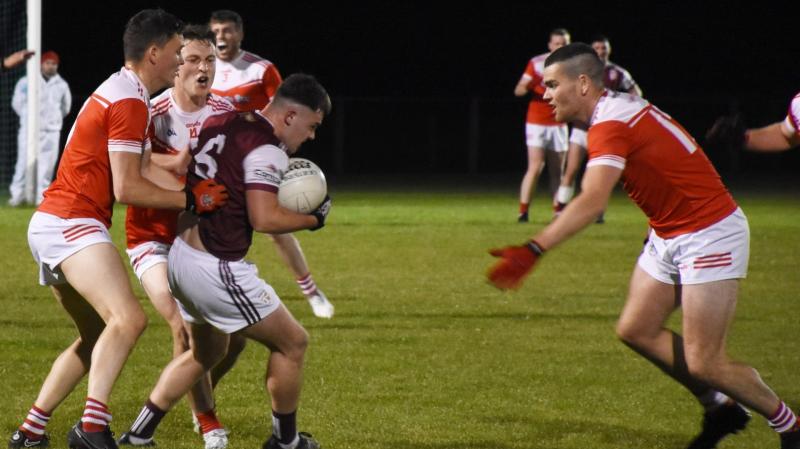 Dungloe manager Dessie Gallagher has led his side back-to-back Donegal IFC finals and said it was a case for Saturday night’s win over Termon  to out-work the opposition.

Dungloe came through to win a scoreline of 0-11 to 0-7 in Ardara as Rosses club aim to go one better than last year, when they eventually lost out to Cloughaneely in a replayed final.

“It was the aim at the start of the year after last year and what happened to us in the final,” Gallagher said.  “But you can only get there by hard work and that was the main thing we drummed into them all week was to work harder than Termon.  And in fairness they did that.

“This was a massive game for us. I’ve watched Termon a few times this season and they are a very good team. They are a young side and are up and coming because they have more young players coming through from underage. Their underage system is very good and they have won championships at minor and U-16.”

Dungloe got off to a brilliant start and kicked four points in the opening 12 minutes, three of which were from distance and could be termed as inspiring.

“Three of them were wild points all together from Oisin Bonner and Karl Magee and were great scores,” Gallagher added. “On another day you would be ticking them off for taking them on but in fairness they did and stuck them over the bar. We were four two up at half-time probably after letting them back into the game with our own mistakes.

“The way they were set up with 14 and 15 players behind the ball it was hard to break through and some of the boys took the wrong decisions on the ball and got caught in possession and gobbled up. But it was great just to be ahead at half-time and to force them to come out and fight for it and then pick them off which we did.

Termon twice cut the lead back to a point in the second half but Donegal immediately responded at the other end of the field.

“We spoke about that in the dressing room that last week we did not turn up at the start of the second half,” Gallagher added. “So we decided we were not going to do that this week and no matter what happened we were going to put in a big 15 minutes and try and finish it out at the end.

“And that is more or less how it turned out and we had to hold on a bit at the end because they were hitting a lot of high balls in because they thought it was our weak spot.”

“But we know it is not. We did not deal well with the highball last weekend and the weekend before but we had very confidence in our players and they showed tonight they can deal with most situations.”

Dungloe had a number of big performances all over the park but young wingback Karl Magee just out of minor football caught the eye. And he joined the attack to land three points and he was his team’s second highest scorer.