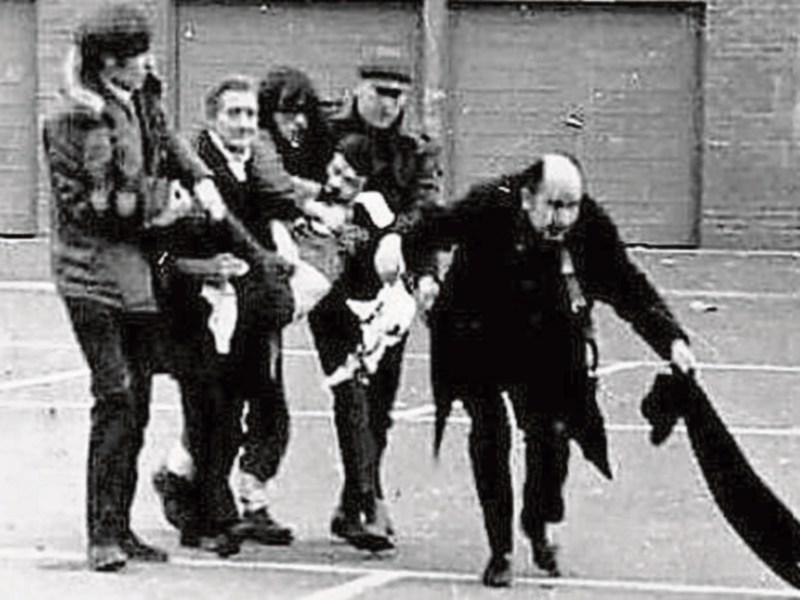 In his homily this afternoon at the funeral mass for Bishop Edward Daly in St Eugene’s Cathedral, Bishop Donal McKeown, Bishop of Derry said Bishop Daly had shown physical courage on Bloody Sunday and his moral courage was evident in his passionate struggle against violence and injustice from all quarters.

“His ministry was marked by total dedication to the people he served, wherever he was called to minister. That dedication was visible in outstanding courage,” he said.

He said “the people of the diocese – and beyond – held Bishop Edward Daly in the highest regard for his loving faithfulness to them over a period of 59 years as priest and bishop in this diocese. He could say, as Jesus did, ‘I know mine and mine know me’.”

A key element of his peacebuilding, Bishop McKeown told mourners, among them President Michael D. Higgins, was his growing friendship with other church leaders.

“In his early years as Bishop, he accepted the ground-breaking invitation to attend the consecration of the young Bishop Robin Eames. He then had a long friendship with Bishop James Mehaffey, who became bishop here in 1980. Their courageous work and real friendship were key factors in building up relationships across the diocese. They attended as many events and occasions as possible together, as a mark of unity and a sign of hope. Today, we are immensely grateful for that legacy.”

Speaking at the conclusion of the funeral mass, Archbishop Eamon Martin referred to one of Bishop Daly's oft-repeated anecdotes.

“'Hey Mister are you a priest?'

“That young boy's question may have lodged in Father Daly's memory, but there was never any doubt that Edward Daly was a great priest, a caring and compassionate pastor, a man of prayer and peace, a courageous and fearless leader, a special person.

“Saint John Vianney once described priesthood as 'the love of the heart of Jesus'. For almost sixty years we have been privileged to have that love shine among us in the life, ministry and service of Edward Daly, priest and bishop.Archbishop Eamon Martin.

A native of Belleek, Bishop Daly’s link with the town that moulded him was reflected in the mass. Bishop McKeown explained how: “On the altar today for the Liturgy of the Eucharist we will use the chalice that was presented to the newly ordained Father Edward Daly by the people of his native Belleek in March 1957 to mark his ordination as a priest. That chalice is a sign of his own 59 years of dedication to the regular celebration of the Eucharist.”

Meanwhile thousands have gathered in and around St Eugene’s Cathedral to pay their respects to a clergyman known and loved the world over.