"I slept with Sam for nearly 3 months!" 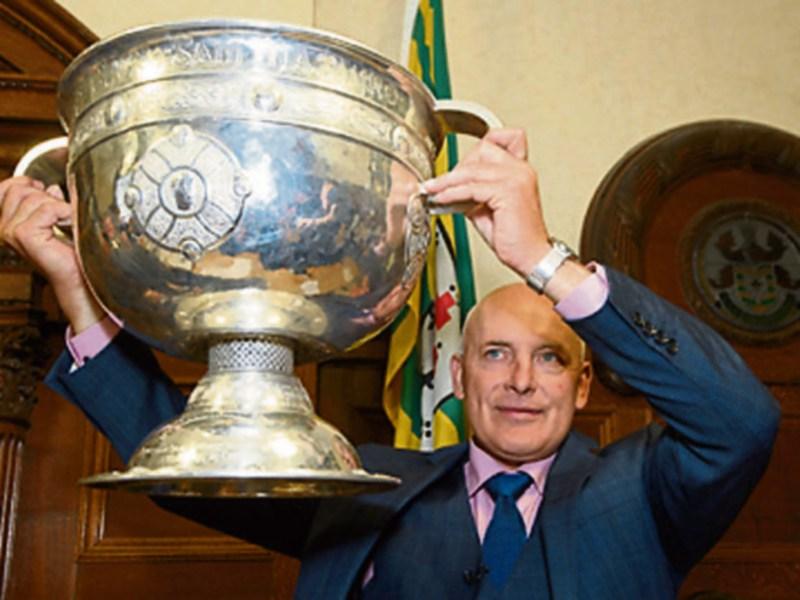 In the wake of last weekend's clash against Dublin, Donegal Life spoke to the man who brought Sam across the Drowes and to the Hills for the very first time.

The iconic picture of Anthony Molloy holding up the Sam proudly in Croke Park still hangs in many's a household throughout the county and today the Glengesh man recalls those early days when Donegal were becoming an emerging force in the football world.

“In the '80's we were like the Cinderella's of the game, we always went home that bit early. We just made it so far but never went the full way. We could play well up to semi-final stage and then it was all over; going home on the bus was one of the longest and most disappointing journeys a player could encounter.

“1992 changed all that. We had a good bunch of players - we had the nucleus of the 1982/87 Under 21 teams so we were confident. The semi-final against Mayo in 1992 was probably one of the worst displays we ever put in but we won and it suited us. We went into that final as absolute underdogs against Dublin.

“As everybody knows now, we came out of the tunnel like greyhounds out of the traps and just blew them away. We had the confidence, we had the belief but we kept it to ourselves.

“I will never forget that day - I was humbled to be afforded the privilege to walk up the steps on the Hogan Stand and pick up the Sam for Donegal . It was the greatest day of my life. I accepted that cup on behalf of the great teams of the '82, '83, '90 and the '92 team.

“It was just a crazy time - arriving into Sligo station and getting that very unexpected welcome to be followed by massive receptions in Bundoran, Ballyshannon and then Donegal Town.

The whole thing was hard to fathom - we left Donegal that weekend as a bunch of ordinary lads and returned as heroes. No matter where you went people wanted to talk to you on the street, get the photograph and indeed replay the game all over again.

“I suppose to the ordinary man on the street it would have appeared that we were having a great time but there was many a night I often wished that I was home in front of the fire watching the television with the feet up.

“It had got to the stage that Sam became my partner - I would wake up in the morning and find Sam either at the foot of the bed or lying beside me on the pillow.

“For up to 4 months we visited schools, opened supermarkets and then there was just function after function. Don't get me wrong, we enjoyed it but it was pretty demanding.”

Anthony continued, “Later in the year Martin McHugh and myself took Sam on the American tour to New York, Boston and Chicago - that was total madness. No matter where we went everybody wanted a part of us.

“I can remember that we both nearly developed a permanent blink - we were facing up to 700 people a night all wanting a photograph of the two of us -with all the flashing we were just blinking all the following day. I'm sure many of the Americans thought we had some awful affliction.

“There is no doubt that it was all a great buzz but realistically we were running trying to catch up with ourselves. It really took about six months for everything to sink in that we had actually won the Sam Maguire and brought it back to Donegal for the very first time.

“In a way it really was a tribute to the many great men that had gone before us - the Sean Ferriters, John Hannigan, Paul Kelly, Bernard Brady - there were just so many talented footballers in the county but it just never went their way.”

Reflecting on the situation today, “There has been a lot of talk about retirements but I would urge all the lads not to come to any rash decisions and give it a good long think before deciding one way or another.

“I remember when I decided to hang up my boots after a bruising encounter with Tyrone in '94 in Breffni Park. It was tough but I knew my time had come.

“When football is your life there is an awful big void to fill. There are the club games but without a doubt you miss the training sessions, the camaraderie and the great highs of winning a major match. It takes a lot of adjusting . It was a very hard decision but I just had to accept it and get on with my life.

“ I often think that the GAA should have some sort of a service for players to help them through the transition period. I think this is particularly important in today's game which is the nearest thing you will find to the professional level.

“These players have devoted the prime of their lives to intensive training at the expense of their social life - its a case of no drink, no late nights, strict diets and days off spent in the gym.

“This present team have given us six great years of enjoyment bringing us to six Ulster finals and as many quarter finals in Croke Park. They opened up the likes of Cassidy's, Copper Face Jack's, The Camden Court, the Harcourt to many Donegal supporters who may never have left their own parish.

“Perhaps more importantly they gave Donegal a renewed sense of pride in the middle of the recession when we needed it most. They restored our belief and showed us that anything can be achieved if the goal is set.

“As a team they have left nothing on the field and can remain justifiably proud of their achievements. This week is not the end of a reign it is the start of a revival - they are still one of the top teams in the country.”

Earlier this year Anthony made history once more when he became the first member of the GAA to be bestowed with the Freedom of the County.

At the time he said, “I come from a very remote area above Glengesh. It doesn't matter where you come from if you put in the effort and believe in yourself you can achieve the success. With our current minor team now heading into a semi-final I believe the future of Donegal football is secure.”