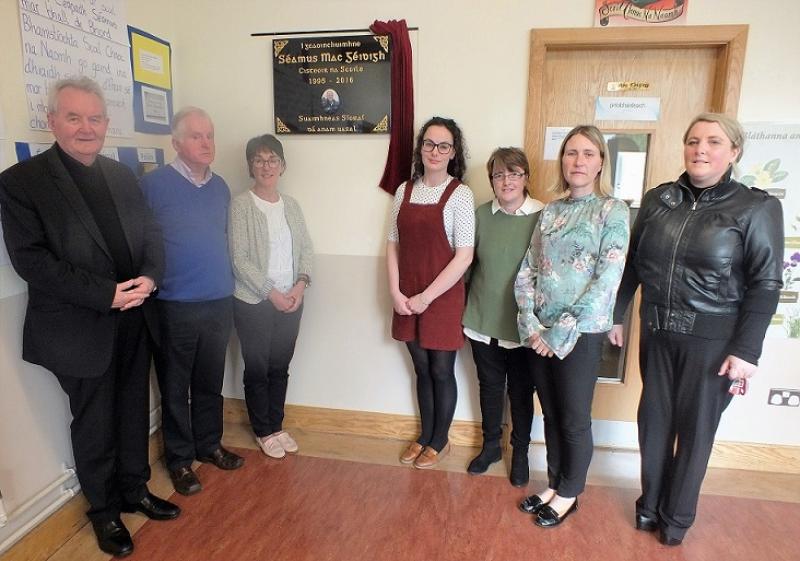 At the unveiling of the plaque in memory of the late Séamus Mac Géidigh at Scoil Chnoc na Naomh. See full caption at end of story. Photo: Tommy Curran

The late Séamus Mac Géidigh was remembered by Scoil Chnoc na Naomh, Gortahork on Friday last, when a plaque in his memory was unveiled and a cup in his memory was awarded to the Best Irish Pupil at the school.

Séamus, a well-known broadcaster, regional manager of RTÉ Raidió na Gaeltachta at Derrybeg and a community activist, died suddenly at the beginning of July last year.

He received his early education at Scoil Chnoc na Naomh and served as treasurer of the board of management from 1995 until his death.

The plaque was unveiled by his widow, Dolores, and the cup was presented by Dolores and her daughter, Póilín. The award for the Best Irish Student was presented to sixth-class pupil Conor Ó hEarcáin of Ardsbeg.

Among the other speakers were Fr. Seán Ó Gallchóir, P.P., chairman of the board of management of the school, and Séamus’ widow, Dolores. There was music, singing, and poetry by the pupils of the school and this was followed by a slide show, which featured the many activities Séamus was involved in down through the years.

Caption for photo, above: Dolores Mhic Géidigh after unveiling the plaque in memory of her late husband, Séamus, pictured with members of the board of management of the school and others: Fr. Seán Ó Gallchóir, chairman; Paidí McClafferty, treasurer; Póilín Nic Géidigh; Frances Nic Íomhair, principal; Gráinne Ní Dhúgáin, vice principal; and Breda Ní hEarcáin, board member. Photos: Tommy Curran