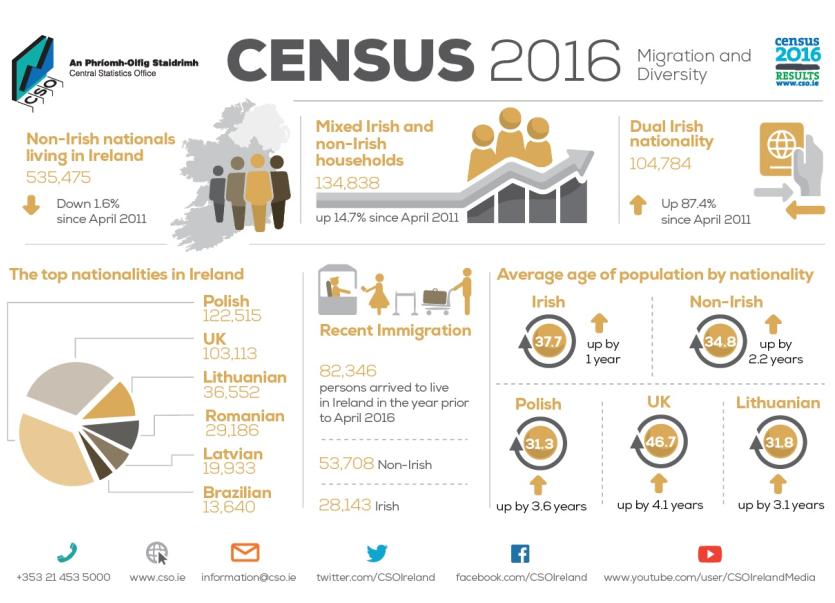 There has been a decline of almost 11% in the number of non-nationals living in Donegal, the latest data from Census 2016 has revealed.

The data also shows that the smallest proportion of non-nationals in the country, live in Donegal.  7.3% of Donegal’s population is made up of non-nationals. This figure is in comparison to 8.1% in 2011.

In a profile on Migration and Diversity issued today, the Central Statistics Office also shows that more than half of the county’s non-Irish national residents were UK nationals (5,860). Together with these, nationals of Poland, Lithuania, India and America accounted for 77% of all non-Irish nationals living in Donegal.

Nationally, non-Irish nationals made up 11.6% of the overall population.

Below is a summary of some of the headline results from Census 2016 for County Donegal, together with comparisons for Ulster (part) and the State as a whole:

The report reveals some fascinating facts and figures nationally. There are people from 200 different nations living in Ireland. The report shows that, in April 2016, there were 535,475 non-Irish nationals living in the country, a 1.6% decrease on the 2011 figure of 544,357. The numbers of people holding dual citizenship (Irish-other country) increased by 87.4% to 104,784 persons.

Commenting, Deirdre Cullen, Senior Statistician, said: “This report gives a detailed insight into the many different nationalities living in Ireland, including their age profile, marital status, the languages they speak, and their educational and employment status. Non-Irish nationals and those with dual nationality are now well established in Irish society and communities throughout the country, and this report provides a wealth of information on their social and economic circumstances in April 2016.”

Where do non-Irish nationals reside?

Only eight counties showed an increase in their non-Irish national population since Census 2011. Cork City saw the largest increase (17.2% or 2,505 persons) followed by Longford at 9.1% or 502 persons.

Looking at nationality by towns, Ballyhaunis in Mayo had the highest proportion of non-Irish nationals with 941 persons representing 39.5% of its population. The two next highest were both in Longford – Edgeworthstown with 32.3% (667 persons) and Ballymahon with 32.1% (599 persons).