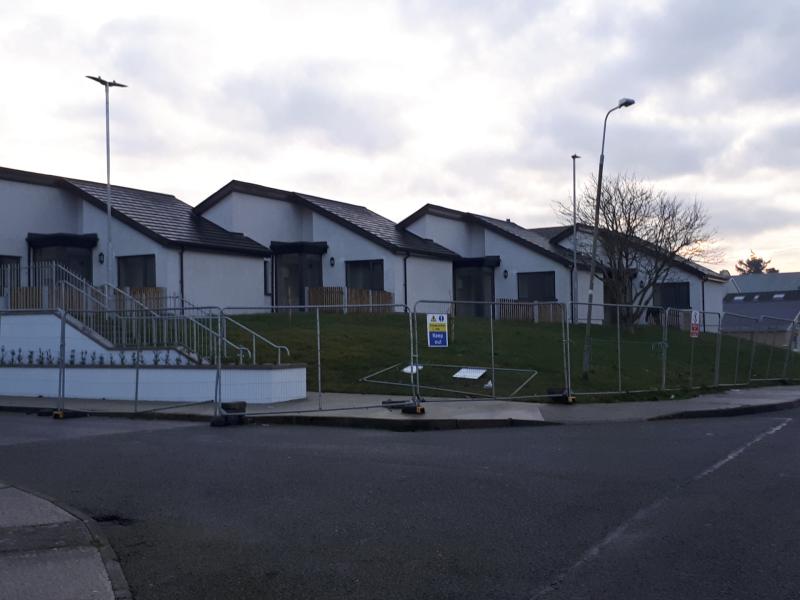 The applicants for 11 single-storey houses at Ernedale Heights in Ballyshannon which have been renovated by the charity Cluid Housing were told that they would not be in before Christmas.

People on Donegal County Council’s housing list who had been told in June that they had been accepted for new accommodation were not able to move into their new homes before Christmas.
The applicants for 11 single-storey houses at Ernedale Heights in Ballyshannon which have been renovated by the charity Cluid Housing were told that they would not be in before Christmas.
Cluid confirmed to the Donegal Democrat on December 20 that the houses had finally been signed off that day and the tenants would be in as soon as possible but not before Christmas.
Some of the prospective tenants had already given up existing accommodation in anticipation of moving into their new homes before Christmas, local community worker and former Ballyshannon town councillor Billy Grimes said.
Mr Grimes said that he was told six days before Christmas by Cluid that “minor snag problems” had meant the work could not be signed off on.
Cluid had issued a tender in August 2016 for extensive renovation work to the homes which included the installation of new oil fired central heating systems, full electrical rewiring and installation of new kitchens. The estimated value excluding VAT was €770,000 with estimated length of the contract six months.
Mr Grimes said it had been hoped that the tenants would be in before Christmas.
“Some of the prospective tenants have already given up their previous accommodation and are having to live in shared accommodation with friends and family or rent at much increased costs and this is not the Christmas present they were expecting,” he said.
“They were told in June they were successful and then delays began to happen but they were told they would be in before Christmas. A few days ago they were told there were ongoing problems in relation to snags and unfortunately they will not be able to move in before Christmas.”
In a statement Cluid said delays connecting services had caused a knock on delay but the houses are now ready to be occupied.
“Clúid is committed to working in partnership with local authorities to provide good quality housing to our residents. We are delighted to have now completed the refurbishment of 11 homes in Ernedale Heights, Ballyshannon.
“Previously rated BER G, the properties are now A3 rated homes. To achieve this, Clúid availed of funding under the SEAI Deep Retrofit Scheme.
“The houses are now of an exceptionally high standard, providing lifetime, sustainable homes for the residents. These homes are part of Clúid’s overall plan to deliver 2500 new homes across Ireland before 2020.
“Working in partnership with Donegal County Council, these houses are now ready to be occupied and we will be working as fast as possible to hand over the keys to the residents. Unfortunately, delays connecting these properties to the relevant services has caused a knock on delay in delivery.”