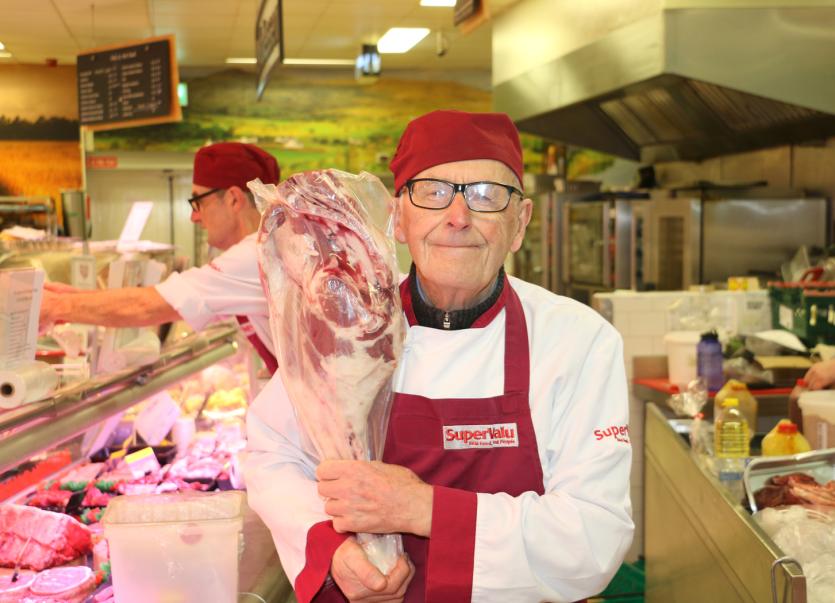 On Friday last customers at Kavanagh's SuperValu in Donegal Town were treated to a surprise “Funday Friday” which has since become a bit of an internet sensation. The store is well known for its emphasis on “local” and as well as employing local staff, purchasing locally it also enjoys a large and local clientele.
John Kerrigan has recently joined the team at the butcher's counter and apart from bringing a great deal of expertise to the already superb team he has introduced a great sense of humour.
He recently starred in Neil Simon's “Rumours” in the Bosco Centre and won widespread acclaim for his witty monologue during the production.
On Friday last one of Donegal town’s great personalities Collie McCrea, himself a very loyal shopper at the store and a highly regarded butcher in bygone years came out of retirement to join John behind the counter.
At 87 years of age, Collie worked for many years with Joe Kelly on both the Diamond and the Main Street and owned his own business in latter years in the Main Street. Well known as an entertainer Collie joined John and both put on an impromptu show entertaining the almost packed store.

John, with great gusto delivered the famous monologue from Hamlet, “To be or not to be” while Collie, with a leg of lamb draped over his shoulder sang “She'll be coming around the mountain” with great aplomb.
The reaction from shoppers was: “Hopefully this will be happening every Friday”. Collie is now basking in the success of his first venture on the web and watching the hits grow and grow.
Meanwhile store manager Gareth Ferry took advantage of the occasion to showcase the great selection of fresh confectionery and huge selection of fresh breads which had been baked earlier that morning.
He said: “The bakers take great pride in their work and are in at 6 am every morning busy baking.”
This brought on another surprise when Joan Gallagher, the famous Duck Gallagher's wife walked in. It transpired she was celebrating a milestone birthday and the ladies were very much on hand with a cake. You can't get much more local than that.