MARKSMAN: How the Donegal players fared in their big win over Kildare in Ballyshannon 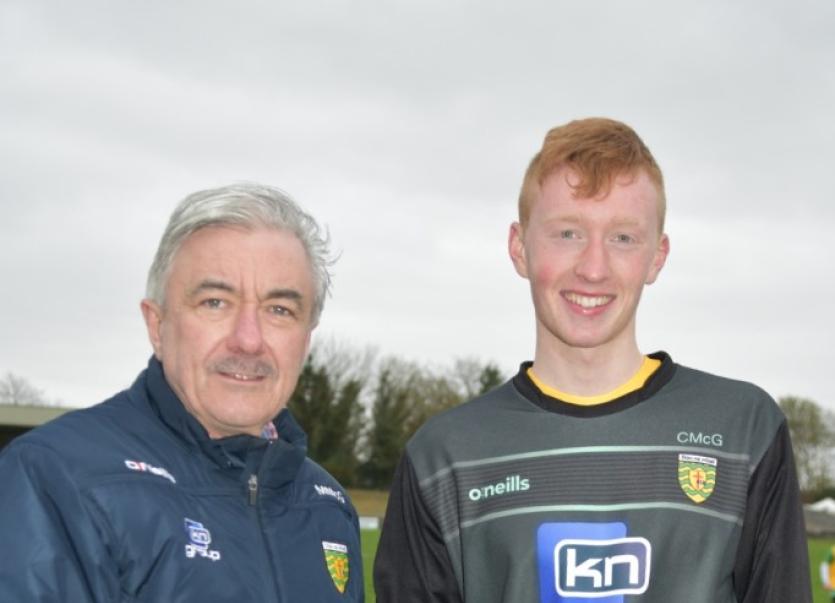 Oisin Gallen being congratulated by Donegal chairman Mick McGrath after being named man of the match Picture: Geraldine Diver

On a very good day for Donegal, Marksman was very impressed with the Donegal display and subsequently marks are generous.

SHAUN PATTON: Had just one save to make and did it well. A difficult day for kick-outs, but he will be happy with his overall performance. 7
PADDY McGRATH: Had a sound game and made one great catch in front of the Kildare goals in the second half. Got a great reception when presented with his memento for his 100 games for Donegal. 7
BRENDAN McCOLE: Back in with the No 3 jersey, McCole had a good game, giving little away to Paddy Brophy and is putting his hand up for championship. 7
STEPHEN McMENAMIN: Another storming performance, McMenamin is becoming a rock of the Donegal defence. An eye catching display. 8
EOGHAN BÁN GALLAGHER: Could have had a goal but his runs caused Kildare all sorts of problems. Will relish a run in Croke Park. 7.5
LEO McLOONE: Another very strong display from the Naomh Conaill man who seems to be really enjoying his football. 7.5
RYAN McHUGH: Took a little while to get going, but then produced another top class display, finishing with 0-3. 7.5
DÁIRE Ó BAOILL: A first start for the Gaoth Dobhair man, he was solid throughout and contributed a good point. 7
HUGH McFADDEN: A steady display from the Killybegs man, who did his job and also kicked a good point. 7
CAOLAN McGONAGLE: Was tried at full-forward at times, McGonagle put in a solid if unspectacular display. 6.5
NIALL O'DONNELL: The St Eunans man followed his Cork display with another top class outing and gets better with each game. 7.5
JASON McGEE: An energetic display. Not everything went right, but he kept going. Was in for a goal, but learned when in again a little later to take his point. 7
OISIN GALLEN: The young MacCumhaills man will remember Kildare in Ballyshannon. He scored four and is gaining in confidence all the time. Top class display. 8.5
MICHAEL MURPHY: Played a captain's role - a great target man in the first half and the point guard in the second half around midfield. 8
JAMIE BRENNAN: Hit 1-1 and was again first to every ball that came his way. Was always looking for action and has had a good year. 7.5
NEIL McGEE: In for his 173rd game to equal Colm McFadden's record. Game was won at that stage. 6.5
EOIN McHUGH: In for last 14 minutes, McHugh got involved in a game that was already decided. 6.5
PAUL BRENNAN, FRANK McGLYNN and CAOLAN WARD: Not on long enough to rate