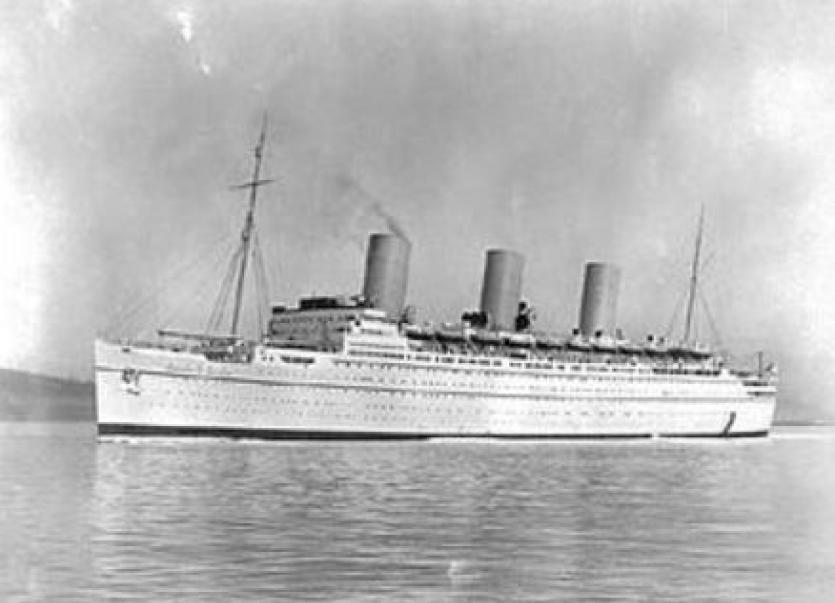 Times Ireland is reporting that a private recovery operator has started an operation to recover up to one billion euro in gold from a ship lying in deep waters off the Donegal coast.

In 1940 a German bomber hit the 2,000 tons and 720 feet long RMS Empress of Britain, a passenger ship which was then in military service as a troop carrier. The ship was abandoned and set ablaze and now lies 500 metres deep and some 130 kilometres off the Donegal coast. The Empress of Britain was the largest passenger liner lost in World War II.

According to Times Ireland the Irish government has been informed and could be in line for a multi-million euro windfall.

The RMS Empress of Britain was an ocean liner built between 1928 and 1931 by John Brown shipyard in Scotland and owned by Canadian Pacific Steamship Company.

In an October 2014 post online headlined "The mystery of the Empress of Britain: Treasure ship, or just another casualty of war?" author and historian Sean Munger writes:

"On October 26, 1940, the Canadian ocean liner Empress of Britain, which was then in military service as a troop transport, was spotted by a German bomber off the coast of Donegal, Ireland. The plane came in for an attack, strafing the ship several times and dropping two large bombs.

"The explosions started a fire aboard the vessel which soon got out of control. Only half an hour after the plane attack, the captain, Charles Sapsworth, ordered the passengers and crew to abandon ship. Despite the raging fire, most of them were evacuated safely. Sapsworth left a skeleton crew aboard in the hopes that the fire could be controlled and the vessel salvaged.

"Although a blazing wreck, the Empress of Britain was slow to die. She had stopped sinking and indeed was still afloat, although smoking heavily and listing, 24 hours after the attack. By now a few British ships had come to the rescue and they tried towing the Empress.

"She was a valuable ship in both peace and war. At 42,000 tons and 720 feet long, she was a bit smaller than the Titanic and would have been able to carry thousands of troops each voyage to any theatre of war. Alas, she was the victim of bad luck. While the tow operation was underway a German submarine came along and fired three torpedoes into her hull. At 2:05 AM on October 28, the Empress of Britain sank beneath the waves. She was the largest passenger liner lost in World War II."

Munger's article alludes to the gold on the ship: "After the war reports circulated that the Empress of Britain was carrying a huge cache of gold bullion. The voyage which ended in disaster had begun in South Africa, where gold mines were busy trying to finance the British war effort. British gold was typically sold to Americans; the US was not yet at war. South African gold usually went across the Pacific which was much safer–the British were not yet at war with Japan–but it was possible that due to delays gold was shipped directly from South Africa to England, then to be re-loaded on another ship for the perilous journey across to the New World."

Munger adds that there were reports of a 1949 attempted salvage, details of this are incomplete and a further attempt in 1995 which located the bullion room, but it was empty.