"His work is invested with energy, passion and commitment to truthful representation of the landscape around him" 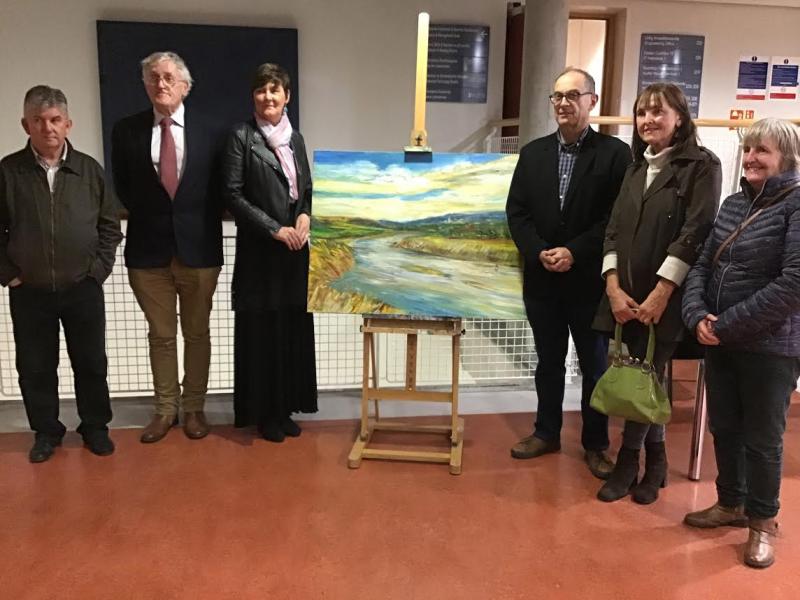 The Sean Fingleton Collection – Work on Loan was launched at Letterkenny Institute of Technology (LYIT) reently.

There was an excellent turn out of people who thoroughly enjoyed the reception and viewing the stunning range of artworks.

LYIT president Paul Hannigan commented that the Sean Fingleton Collection was very important to the college and LYIT was delighted that this launch would mark the occasion of the artist and former student’s generous gesture.

"The college will be celebrating 50 years in 2021 and the focus is very much on the Institute’s history and contribution. As Sean studied here from 1976-1979, his fine art training in Letterkenny is a part of this early history.

Sean has established a career as one of Ireland’s leading artists and the paintings are distributed around the college to allow enjoyment by staff, students and public alike. The collection highlights the importance of the institute as a memorable foundation in the career of Sean Fingleton and its legacy potential for all its students.

I would like to thank Marianne for her help with the launch, Sheila King, Mary Daly, and particularly Sean for generously lending his work to LYIT," he said.

Retired lecturer of Fine Art and a former tutor of Sean’s, Eddie O’Kane recaled how he took over from Robin Costelloe at Letterkenny RTC in 1975 and was in charge of Fine Art.

"Sean Fingleton was an outstanding student from the outset. He worked tirelessly and experimented with materials and styles. His lifetime’s work has established him as one of the most outstanding landscape artists in Ireland. This loan is a fitting tribute to Sean and the other art and design students who have studied here," he said.

Art critic and consultant, Marianne O’Kane Boal spoke of the absolute pleasure of working with Sean.

"He is such a gentleman and talented practitioner. His work is invested with energy, passion and commitment to truthful representation of the landscape around him. To talk in detail to Sean over recent months and write about his work has been very rewarding and fascinating."

The artist conducted a tour of the collection following the speeches and explained the context of the works on display. It was fascinating with interesting insights on his painting process and philosophical underpinnings of the dramatic land and seascapes within the Donegal region.

He explained his work is about beauty and a sense of wonder in the world and that he is primarily an expressionist painter, interested in working with deep feeling.

The exhibition of work on loan remains on display in the LYIT campus and the public are welcome to LYIT and enjoy the exhibition. Sean Fingleton was born in Malin. He studied at University College, Dublin where he received a BA in English and Philosophy. He also studied art at Letterkenny RTC, and the National College of Art and Design.

His work forms part of the collections of the Arts Council of Ireland, IMMA, European Parliament in Strasbourg, the Office of Public Works, the Bank of Ireland Collection, the Great Book of Ireland Gluckman's Gallery Cork, the Royal Hospital in Gloucester and in many public and private collections throughout Ireland.

He has been the recipient of many prizes, including a 1986 GPA Award, and in the same year an Independent Artists award, The Fergus O'Ryan RHA Award 1993 and has been twice a prizewinner at the annual Claremorris Open Exhibition. Sean was made a member of Aosdana in 2006.

LYIT is delighted to present the Sean Fingleton Collection – Work on Loan. The loan to LYIT consists of eight oil paintings executed between 1986-2000 that feature scenes from Letterkenny, dramatic landscapes and seascapes and expressionist portrayals of life within nature. These paintings have been installed in the college to be enjoyed by staff, students and visitors; a thoroughly welcome addition.

Sean Fingleton studied art at the college (then Letterkenny RTC). It was important to the artist that his work has a presence here.

"It is meaningful that these works are in Letterkenny. I have a fondness for the college, the town, and the county. I also have a following in Donegal that I felt could be served by this loan’.

Fingleton remembers the relaxed atmosphere of the college with affection: "It was a friendly place. It laid the ground work for my art career and all my later work. I had a strong mentor in Eddie O’Kane. He taught analytic drawing and working from the model. We could work from long poses and really work extensively. I was also inspired by Declan McGonagle and he was encouraging".

Marianne O’Kane Boal has written: "Sean Fingleton has long been one of Ireland’s leading landscapists. He has forged a path within the Irish art tradition that is uniquely his own and inspired by his natural surroundings. He has a sculptural approach to the application of paint, investing physical vigour in building surfaces with a palette knife".

Sean Fingleton has commented: "A landscape is a scene to inhabit. My thoughts, experiences, senses, emotions and philosophy are poured into the given space I am painting". He articulates ‘visual statements in paint, moments in being that cannot be expressed in words’.

"Sean Fingleton's impassioned landscape studies are distinguished by their fierce honesty. They are also high-risk performances and Fingleton sets out to deal unambiguously with the clamorous here-and-now of the landscape flinging itself against the senses." – Aidan Dunne