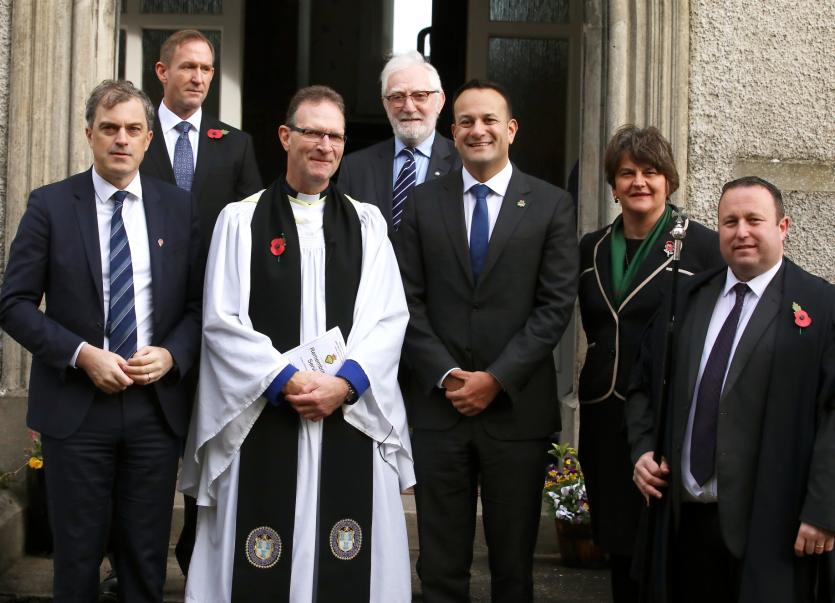 Pictured at St. Macartin's Cathedral at the Remembrance Service in Enniskillen (Photo by John McVitty).

The Remembrance Day Service in St. Macartin’s Cathedral, Enniskillen, was attended by representatives from five governments including the Taoiseach, Mr Leo Varadkar T.D.

The service, following the Remembrance Ceremony held at the Cenotaph in Belmore Street, Enniskillen, scene of the Remembrance Day bomb in 1987 which resulted in the deaths of 12 people, was led by the Dean of Clogher, the Very Revd Kenneth Hall, assisted by Monsignor Peter O’Reilly, from St. Michael’s Church. The preacher was the Bishop of Clogher, Right Revd John McDowell.

The Last Post and Reveille were sounded by Warren Kerr of Ballyreagh Silver Band.

Lt. Col Mark Scott (Ret’d), Royal Inniskilling Fusiliers, led the words from the poem, “They shall grow not old as we that are left grow old” and the Piper’s Lament was played by Pipe Major Gordon McKeown, 4 UDR Association.

The Cathedral Choir accompanied by organist, Glenn Moore, sang the anthem, “The Mansions of the Lord,” and the collection was taken up for the Royal British Legion Poppy Appeal.

The National Anthem was sung before the Blessing by the Bishop of Clogher.

In his address, the Bishop of Clogher said that almost all wars over the last 200 years had arisen from a failure to understand the destructive power of a certain type of nationalism.

He said that in the Great War and in others since, the state had managed to do something which the churches had been trying and failing to do for many years - to get young people to rally to its cause; in the case of the state the cause of the nation. In 1914 young people flocked to join up.

Bishop McDowell said: “In 1914 that was a considerable achievement. There was a feeling in the years leading up to the Great War that the young were rebellious and discontented. Yet alongside their discontentedness and urge to rebel there lay another instinct for order and for disciplined action. An instinct and a desire for a great cause to be served by a great sacrifice.

“And by talking about the nation in a language which should have been reserved only for God, the church to some degree sawed through the branch on which it was sitting and had nothing else to offer when the war ended and the steady decline in numbers and in ethical power (which continues to this day) began.

“But now with all our advantages of being able to see further along the great arc of history than our ancestors could, it is clear that, above all else, it is a nation which carries injustice in its womb which will find its nemesis in conflict. That injustice may be in relation to other nations. Wanting to be ‘first’ in a way that means others must be second or third and should be glad to be so. Wanting to be ‘great’ in a way which belittles others and requires them to defer to all that makes for the greatness of the great.

“But there is also a reckoning and a judgement for those nations which allow any internal injustice to persist for too long. Injustice that requires many of their citizens to live in austere circumstances or in an unfriendly environment. Or countries that devote their best efforts and their best minds to maintaining an economic system that has at its principal foundation the reef of sand called ‘asset values’, particularly the value of houses, while thousands of their citizens have no-where to lay their heads, no permanent home in which to build up their family life, or to realise the little dreams of domestic security which are the beating heart of truly democratic societies. Or a society which is deeply divided and frankly sectarian but where parties of power see advantage in division and reinforce it. Or a society which can see the continued anguish of people like those who suffered in this town 32 years ago but who have not the compassionate will to face up to the practical remedies for that suffering.

“In these islands with our history of democracy and cautious governance and close diplomacy, conflict across our borders or international conflict of any kind only takes place when we start to talk to one another with the candour of a friend but without the kindness of a brother. It happens too when those who are responsible (generally our civil servants) for guarding the treasury of wisdom in policy making and governance become politicised, or afraid to offer governments the accumulated institutional wisdom at their disposal, leavened by their own sober and mature judgement.”

Bishop McDowell said that injustice was also the greatest tragedy of war.

He continued: “Some people make mistakes and other people pay the price. And it is principally the people who paid the price who we remember and pay tribute to today; but we do so in the face of a God of holy love who makes demands of us who do the remembering. We need to be careful that he is as pleased with us as we are with ourselves.

“We do not know what was in the minds of those young men from this parish whose names we read out earlier; or in the minds of the many millions who died in the Great War. What was in their minds when they ‘rallied to the colours’ or when they completed their training. Or when they first saw action, or first experienced fear. Or when they saw friends and comrades die or faced the hour of death themselves. We simply do not know. But we do know that to have done as they did must have taken extraordinary courage and perseverance and, probably cheerfulness too.

“And we also know that 1919 wasn’t the end of it. It wasn’t the war to end all wars. We know that the campaign between good and evil drags on and that the evil world will not win in the end because in the death and resurrection of Jesus Christ (the greatest battle ever fought and the highest price ever offered and paid) it failed to win the only time it ever could.”

Looking back at Germany, regarded as the most civilized country in the world before the outbreak of the Great War, he said that deep within itself it had also a frail seam and an old wound, which, as was so often the case in individuals and in nations, expressed itself not as weakness, but as a belief in its own exceptionalism and its special place in history.

Bishop McDowell said: “And the United Kingdom of those days also shared many of these characteristics. At the time of the Great War, on any scale of judgement, the UK was less successful than Germany had been in adjusting to, or indeed shaping, the modern world of the twentieth century. But with two notable exceptions; Britain (or at least England) had been a unified nation with a common culture for much longer than Germany; and, as an island nation, it had built up a much greater Navy. And it was around naval strength that a rivalry developed with Germany which escalated into poisonous competitiveness which eventually led to war. That is where the diplomacy of two of the most sophisticated chancelleries in the world foundered.

“And when you look back on the pronouncements and actions of the Churches at that time (churches and religion were a great deal more important in the affairs of nations then than they are now) you see evidence of our own fatal flaws which contributed to the causes of the war. The flaw of teaching people to think of God as their chief asset rather than as their eternal Judge. To want God to be on our side, rather than to take care that we are on his. The State had an important place for God. And they kept him in his place. And that place was to glorify the nation and not to vindicate and hallow His Name before all the nations of the earth. And to our shame both before and since the churches have abetted that sacrilege.

“All war and all conflict between nations are failures of diplomacy. That is as true today as it was in the run up to the Great War. And a failure of diplomacy is a failure to talk sympathetically, intelligibly and truthfully across national boundaries. But that failure begins at home when Governments delude their own people and perhaps even delude themselves into unreal assessments of their virtues and vices. It happens when a certain type of political pharisaism is allowed to develop. Pharisaism ends in hypocrisy but it doesn’t begin there. It doesn’t begin in conscious duplicity but in an unconscious unreality, which makes false estimates of the world and of its own powers. It derives from a self confidence that has never had its confidence shaken. It is not a disease of the mind but of the soul. It is so far removed from the true data of life that it doesn’t even suspect just how unreal it is. And it can be as deadly in political or civic life now as it was in religious and civic life in Germany in 1914.