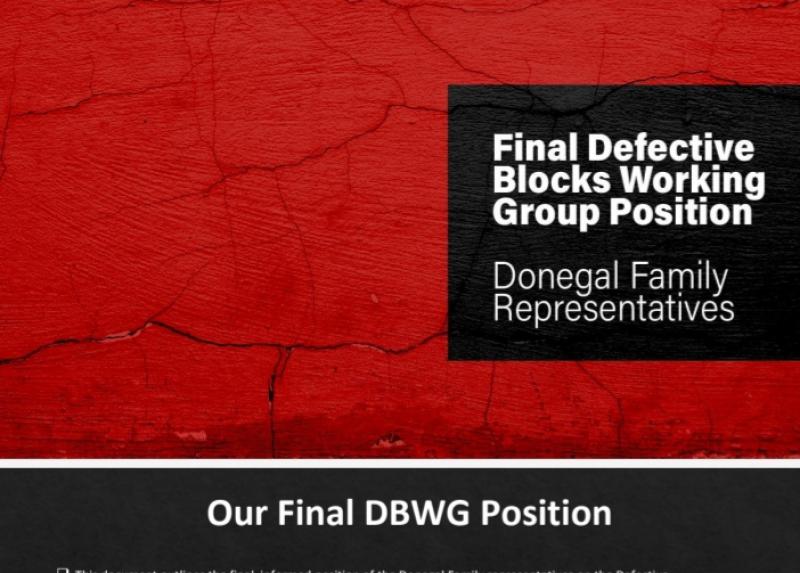 The final Defective Blocks Working Group Position report of the Donegal Family Representatives has been endorsed at a meeting of Donegal County Council's Mica Redress Committee.

Opening the meeting, Cllr Martin McDermott, chairperson of the Mica Redress Committee, paid tribute to the recently deceased Inishowen Cathaoirleach, Cllr Bernard McGuinness, as one of the first councillors to highlight the mica issue. On behalf of the committee, Cllr McDermott extended his sympathy to Cllr McGuinness's wife and family.

The [Final Defective Blocks Working Group Position] report's endorsement was proposed by Pearse Doherty TD (Sinn Féin), seconded by Cllr McDermott and agreed by the majority of those present.

Cllr Frank McBrearty (Independent), however, vocally opposed the endorsement, saying the Mica Action Group did not represent him, his family, his friends or the people he represented.

Throughout the course of the, at times, heated meeting, Cllr McBrearty microphone was muted several times by the chairperson.

The report had initially been presented to the full Working Group on Friday.

'It is important to remember, we are all affected homeowners and our homes are collapsing around us'

Commenting on the report, Michael Doherty, Mica Action Group PRO, said it detailed essential requirements that must be fulfilled by Government to enable people blighted with crumbling mica and pyrite homes to be able to plan a way forward to reclaim their houses and their lives.

He explained: “The vital cornerstones [of the report] are 100% redress, a 40-year state backed guarantee for partial remediation and that all affected homeowners should be included in the scheme.

“The document is the homeowners’ representative’s response to discussions with government officials that have been taking place since July, to communicate to Government the current redress scheme was unfit for purpose and did not offer them a way out of a hugely stressful and distressing situation.

“This document represents a culmination of many weeks of detailed discussions and research to ensure we are providing an accurate picture of the issues experienced by homeowners in many different circumstances and what is realistically required for them to escape this nightmare.

“We have been campaigning on this issue for almost a decade, successive Governments have played down its seriousness and scale.

“We have had politicians make promises only to break them and then in 2020 we were presented with a redress scheme which in its final form was unfit for purpose and was devised without consultation with homeowners.

“We are hoping that Government treats this document with the respect and gravity it deserves and delivers the requirements with the urgency that desperate homeowners need.”

Mr Doherty described people's homes as having effectively been stolen from them by the failure of successive Governments to enforce proper regulations in the construction industry.

He added: “Homeowners should not have to pay the price of Government incompetence with unrelenting anxiety about safety, finances, the distress of seeing their home demolished and future homelessness.

“The government has the power to end this now, and the power to put in place meaningful governance to avoid another chapter of homeowners suffering needlessly,” he said.

Minister Charlie McConalogue thanked the Mica Action Group and its Working Group members for the “tremendous and trojan” work they had done, so there was clarity around what the questions the Government needs to address.

He said: “Once the Working Group is finished its work, it's over to the Government and the political process and to ourselves as Oireachtas members.

“I as Minister will be doing everything I possibly can to deliver the asks from the Working Group and the key issues and objectives, particularly in terms of the 100% redress.”

“I would endorse it 100% because it deals with what's emerged on the ground, what the experience has been.

“I think it is really important that the Housing Agency takes over the implementation of the [Defective Concrete Blocks Grant] Scheme, takes it away from the local authorities. We need this all under the one roof.

“In addition a state-backed guarantee for any works being carried out would solve a huge problem,” said Deputy Mac Lochlainn.

Cllr Albert Doherty, vice chairperson of the Mica Redress Committee said that in an information bulletin on the Defective Concrete Blocks Grant Scheme, Donegal County Council's Chief Executive said Council did not pay the contractor and grant payments were made direct to the applicant.

Cllr Doherty added: “He also mentioned in Final Stage Payment the claim must be accompanied by a Certificate of Remediation and emphasised 'Council cannot pay more than 75% of the approved costs before the final payment, as this is a requirement of the scheme'.

“That was raised recently at a meeting where contractors highlighted difficulties this presented for them.

“They said the 25% retainer was a disincentive for applying for these remediations and time-spans and loose terminology on some of the documentation, for example, 'as soon as is reasonably practical', were not acceptable.

“We must outline the series of meetings we want to have in response to what is the outcome [of the Working Group] and also to make our committee more meaningful, because, another item we heard from the Chief Executive was the limited, reduced role that former representative Joe [Peoples] had at these meetings.

“A big, big issues as well is that we have so many tenants that are waiting with baited breath for some response to these talks. Mental health and well-being needs to be brought into the education sector.

“The response of our Oireachtas members has to be a Taskforce Response, like Fruit of the Loom, for the full county of Donegal and the Western Seaboard.”

Stage 1 applications received: 459, of which 340 have been approved and 106 are at the further information requested or assessment stage.
On the completion of Stage 1, 310 applications have had their fees paid, to the value of just over €1.6 million.

Stage 2 applications received: 50, of which 30 have been approved and 20 are at the further information requested or assessment stage.

The value of the approvals is just short of €4.5 million. The remaining applications are at the further information requested or assessment stage.

Stage 3 applications for payment received: 17, of which 12 had been approved and five are pending. The value of approvals is just short of €400,000.