Former minister of state laid to rest in Raphoe 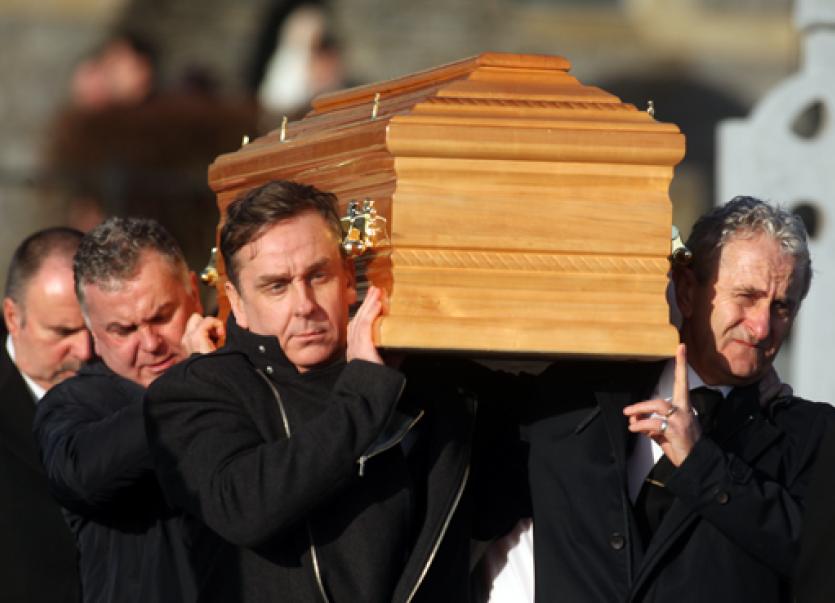 The remains of Paddy Harte are carried by his sons Garrett, Emmett and Paddy . Photo: Thomas Gallagher

Hundreds of people have attended the funeral of former Donegal TD Paddy Harte
in Raphoe.
The former minister of state, who served as TD for Donegal North East from 1961 to 1997, was laid to rest in Raphoe on Thursday afternoon.
He passed away on Monday morning in Lifford Community Hospital at the age of 86.
His funeral heard tributes to his efforts to preserve the memory of all the Irish men and women who died in the First World War. His contribution to the peace process in Northern Ireland was also recalled.
A lone piper led the coffin of Harte from his home on Raphoe’s Diamond to St Eunan’s Church.
Aide-de-Camps of the president and the were the among the mourners.
The government was represented at the funeral by justice minister Charlie Flanagan and chief whip and Donegal TD Joe McHugh.
Mourners included the wife and brother of the late Glenn Barr from Derry who founded the Island of Ireland Peace Park at Messines in Belgium with Harte in 1996.
Former SLDP lead Mark Durkan and Pat Hume, the wife of Nobel Prize peace recipient John Hume, were also among the mourners.
Harte’s daughter Mary told mourners that her father was passionate about finding a resolution to the troubles in Northern Ireland.
“He traveled the lonely road of reconciliation politics long before it was popular or profitable to do so,” she said.
Harte was laid to rest in the cemetery adjoining St. Eunan’s.