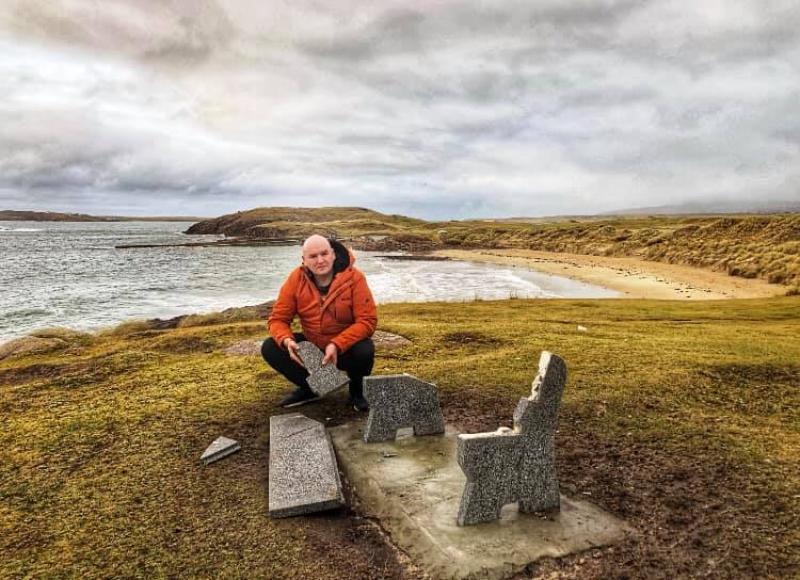 West Donegal councillor Micheál Choilm Mac Giolla Easbuig has slammed the wrecking of a beautiful stone chair which was erected at a local beach to honour two local people.

It was made possible thanks to the goodwill and generosity of Cllr Mac Giolla Easbuig's cousin and such was the positive reception to it that four more were erected and at least five more in the pipeline.

Cllr Mac Giolla Easbuig is distraught over what has happened.

"Paddy Theague, RIP, asked me if I could get a chair for the 'old ones' as he said himself ‘to sit on ag An Cé Úr’, Machaire Gathlán. My good cousin, Cairan Gillespie, agreed to fund the €450 cost and we dedicated the first chair to Grannie Bháin Nic Giolla Bhríde agus Tom a'bhungalow, and so it began.

"We have now progressed to four chairs, each one dedicated to local heroes. A beautiful verse, as Gaeilge, on each seat, all inspired by our many beautiful islands," he said

Cllr Mac Giolla Easbuig said the plan for 2020 was to add five more and to raise the funds necessary to complete the project.

"They would be dotted along the coastline allowing people to either rest or just to enjoy the beauty of our shores."

Now however he is at a loss to understand the mindset of those who vandalised the first chair.

"I just don’t understand why anyone would want to do this?"