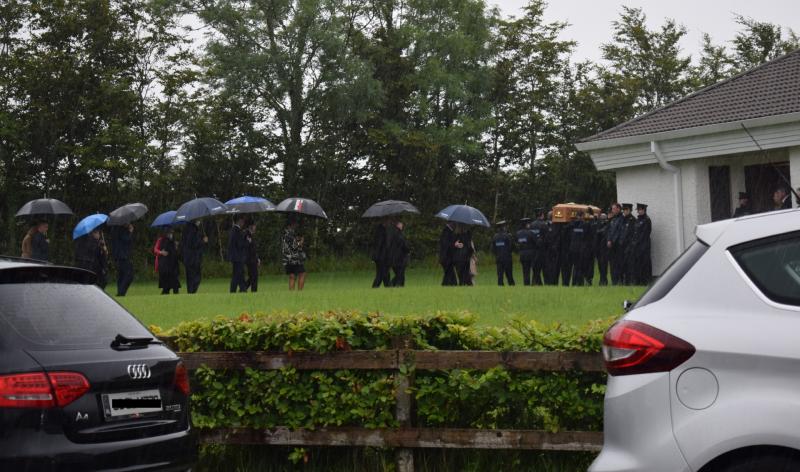 Gardaí carry their beloved colleague on his final journey

A rock, someone you would aspire to be like, a man of justice, empathy and compassion.  Those are just some of the many ways in which Garda Charlie Gallagher will be remembered by those who loved and knew him best.

It was a reflection of the esteem in which the late garda was held that despite torrential rain, there was a huge turnout for his Funeral Mass in St Mary’s Church, Killymard, Donegal Town on Sunday afternoon.

Members of Four Masters GAA Club were among those to form a Guard of Honour, while his garda colleagues carried and accompanied his remains to and from the church.

Charlie Gallagher’s impact in the community was far reaching. Not only was he a fair and committed member of An Garda Síochana, he was a dedicated family man and a keen Gaelic football player and coach. His untimely death after an illness borne with great bravery has left a cloud of sadness on communities in south and west Donegal.

Gifts brought to the altar at the beginning of the Funeral Mass reflected his life - a coffee cup, his garda hat and gloves, a Celtic jersey, a GAA trophy, and most precious of all, a family photograph.

Chief Celebrant Fr Pat Ward told mourners that life was like a pilgrimage or Camino - that the journey itself was just as important as the destination.

“We all come into this world, and we know that at some stage, we're going to leave this world again,” said Fr Ward.

“And that's not the most important part.

“The most important part is the journey we take and what we do with these number of years that we have in the meantime; how  we rub shoulders with people; how  we communicate with them; how  we find our way of telling our story, or our way of listening to theirs. That's what makes our lives much more interesting, and much more meaningful - how we've taken the journey.

“We know that everybody appreciates the journey of life that our brother Charlie took, for the different people whose lives he touched, to feel that he enhanced them, that he made those lives better, that he made them a little bit more worthwhile.

“I know it’s there very much with his parents, with his brother, with his own family, and with his colleagues, and with the many different people who fought with him on the football field as well.”

The priest described Charlie Gallagher as a man who had looked after himself, was careful with his health and was well grounded.

“He was stoic, and he was capable,” continued Fr Ward.

“I’m sure the same could be said from his colleagues who are here today.”

The priest said he believed Garda Gallagher’s background as an islander had given him the stoic attitude and acceptance that helped him to deal with his illness.

He added that being able to lean on his faith had also been a big help.

“He liked his faith; it gave him strength,” said Fr Ward.

“I’m told he even learned the Our Father in Latin because he heard the devil hated it in Latin altogether. And so he went about and learned it a little bit in that language just to have another wee go at the bad man!”

Fr Ward recalled the garda as a man of justice.

“But that justice was also tempered with charity,” he said.

“And he was a clever person in that way. He stood for justice. But he knew that justice was nothing unless there was a little bit of charity involved too.

Garda Gallagher’s son Evan delivered a moving Eulogy that gave a beautiful insight into Charlie, switching between English and Irish to reflect this area of his father’s life.

“Sitting down to write Dad’s eulogy, to attempt to condense his life and an accurate description of both his disposition and personality into one passage of text was by no means an easy task,” said Evan.

He told mourners that Charlie was born on June 14, 1971 in Glasgow, Scotland, to Charles and Ann Gallagher. After settling in the Rosses in 1980 he quickly gained a keen interest in both the Irish language and Gaelic football, passions of his that stayed with him throughout his life.

After finishing his Leaving Certificate exams, he entered An Garda Síochana in 1992.

“And with him, he brought a disposition of compassion, of empathy, of warmth and understanding, as well as a diligent work ethic and an instilled willingness to see the best of people in every situation,” said Evan.

“Prior to Dad’s illness and passing, I was under no false illusions that he was a great man.

“But from hearing numerous stories about his many acts of generosity, unselfishness and abounding understanding, I can now stand firm in the assertion that he was one of the most gentle and amazing men I have ever met in my life and it is an honour to be able to call him my father.

“From playing and coaching Gaelic football to carrying out his duties in the town, Dad was always willing to see the best in people and grant people the benefit of the doubt regardless of their history or their background.”

Evan said that his father had written letters to himself and his siblings, Conor and Faye.

“He set out a few of his expectations for how we should carry ourselves throughout our lives and how to treat other people,” he said.

“In my letter, he emphasised the need to always look out for the underdog as well as the importance of kindness, saying: ‘Random acts of kindness are needed in today’s world more than ever.’”

"I mo litir, dúirt sé liomsa: ‘Continue your love of the Irish language, history and culture.’

Following the Funeral Mass, Garda Gallagher’s remains were brought to Belcruit Graveyard, Kincasslagh to be laid to rest.

A book of condolences has been opened at Donegal Town Garda Station.