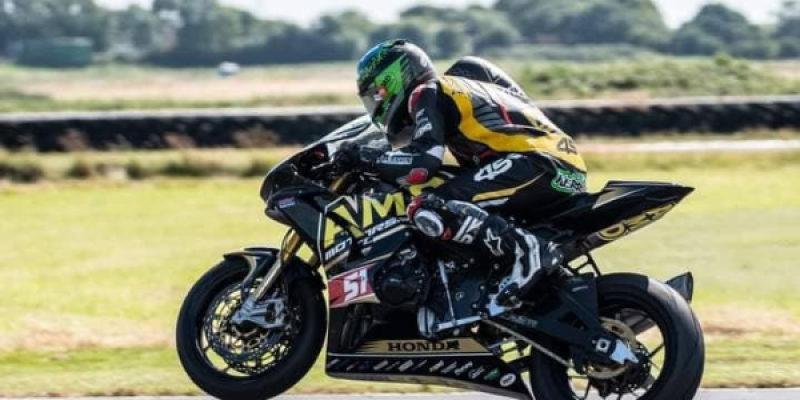 In round five of the Championship, Kerr had seventh and ninth place finishes as the AMD Motorsport rider maintained his place in the standings.

After his success the previous weekend at Bishopscourt, Kerr and the Dumfries-based team arrived at the 2.43-mile circuit in confident mood and although 12th overall in Friday’s free practice sessions, was a bit lower than where he’d hoped to be, he knew where he needed to improve.

Kerr lowered his time by almost a second in Saturday’s qualifying session to move up to 11th and cut the gap to the leader to 0.8s.

A good start would be crucial to Saturday’s 15-lap race and that’s exactly what happened with the 22-year old completing the first lap in seventh place on the CBR1000RR Honda Fireblade. Although he briefly dropped to eighth and two seconds behind the race leader, he quickly responded and was back into seventh by lap six.

Reducing the deficit to race leader Richard Cooper to 1.3s, Kerr found himself part of a seven-rider battle for the lead but any hopes of advancing further were dashed when the red flag came out on lap 11.

It meant the result was declared at ten laps which put the Donegal man in seventh place and the fine ride meant he consolidated his sixth place in the championship standings ahead of Sunday’s second encounter.

With the fifth fastest lap of the race he was able to start Sunday’s race, held over the same distance, from the much more advanced position of fifth and the middle of the second row.

An unusually sluggish start decided his race as he completed the first lap in tenth place.

He moved up to ninth on lap five, after overhauling Lewis Rollo and five laps later, the gap to the leader Alex Olsen was still only 3.2s. The second fastest man on track in the final third of the race, Richard was hoping to pick off a few more places but, after running slightly wide at Graham Hill Bend, he lost a bit of ground and had to settle for ninth place. Nevertheless, the haul of 16 points from the two races enabled him to move onto a season’s total of 96 and remain in sixth place overall.

Kerr said: “I was a bit disappointed the first race got red flagged as I felt really strong and was confident of moving forward in the final third of the race. I was being held up a bit by David (Allingham) but my end of pace was strong – stronger than some of the others in front of me who I could see were struggling a bit – and felt the top three could have been possible. My lap times were good and although it was a seventh place, I was only two seconds off the win.”

The next round takes place at Thruxton, Hampshire on August 12-14.