‘The most talented athlete that we have ever produced in the north west of Ireland. Ever’.

Mark English won the European 800m bronze medal last Sunday evening in Munich - the fourth European medal of his career. Chris McNulty looks at the life and the times of the Finn Valley AC runner

Patsy McGonagle was in Roscommon and, almost stunned by the news just relayed to him, had to pull the car in.

McGonagle made an early exit from the 2011 National Juvenile Championships in Tullamore.

A few events remained on the schedule as McGonagle - at the time the Irish athletics team manager - made his way back to Ballybofey.

Mark English hadn’t just won the under-19 400m, the then Letterkenny AC man’s 48.02 seconds was a new county best.

It was, McGonagle recalled, a ‘madcap weekend where I just decided to leave Tullamore early to get back to Ballybofey at something resembling a respectable hour’.

The previous year, English, came to prominace when winning the 1000m at the inaugural European Youth Olympic Trials in Moscow. There, he finished in 2:24.53 to earn a place at the finals in Singapore. 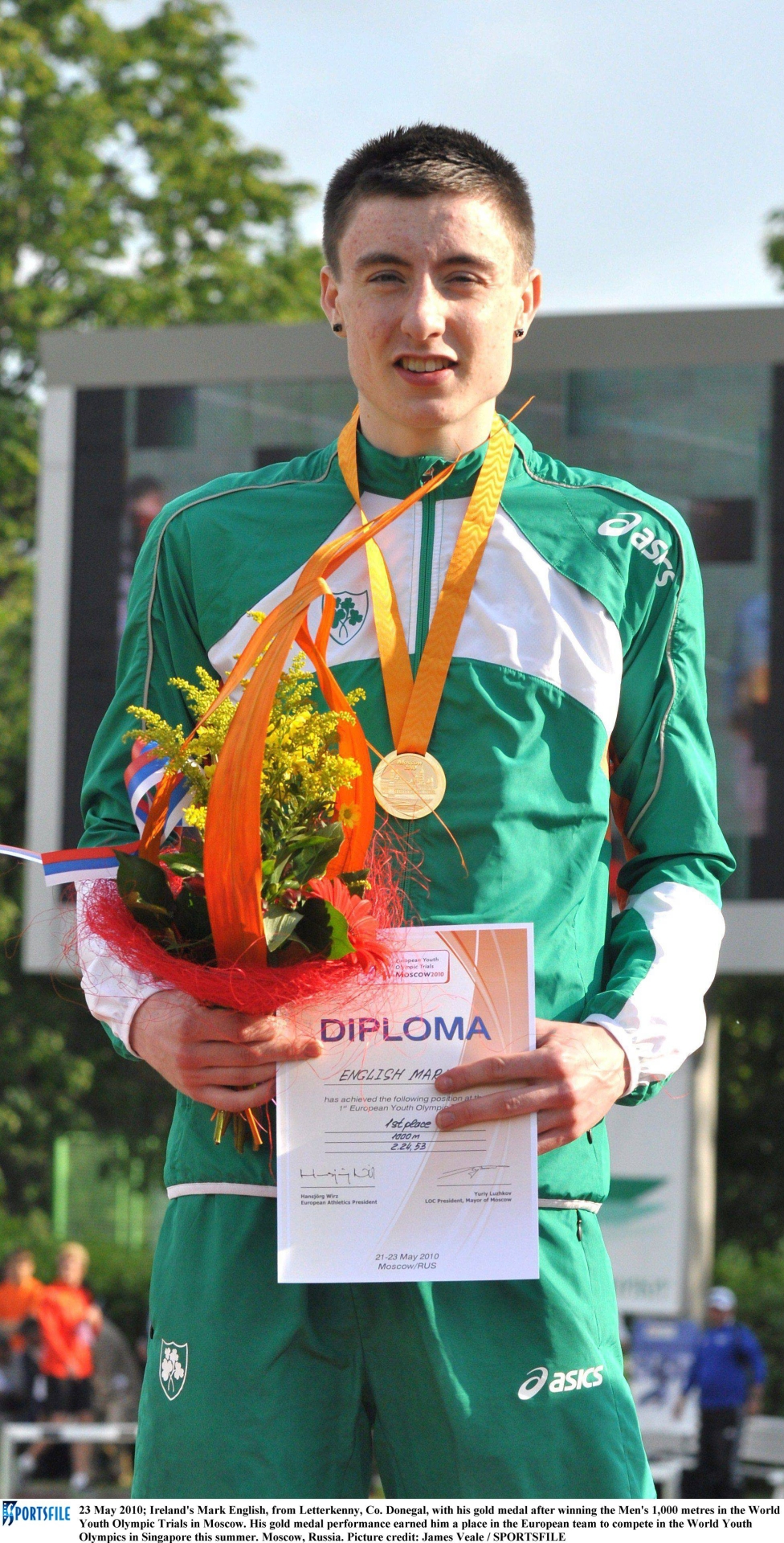 Eight years later, in his autobiography, Relentless, in the wake of English winning a bronze medal at the European Indoor Championships in Glasgow, McGonagle wrote: ‘Mark English is the most talented athlete that we have ever produced in the north west of Ireland. Ever’.

The second ‘ever’ was telling.

English was the silver medalist at the 2015 European Indoors and had collected bronze from the outdoor European Championships in 2014.

He signed for Finn Valley AC in early 2020 having run under UCD AC’s banner for the previous eight years having been a student at the UCD School of Medicine and Medical Science.

The move to the blue and white singlet saw English follow in the footsteps of his aunt, Bernadette, who was Finn Valley AC’s first ever Irish champion, winning Irish Junior 100m and 200m titles in 1975. She was present on Monday when her nephew retuned to Dublin Airport with his European 800m bronze.

He said: “I’m very close to Bernie. She has been at all of my races and was in Rio for the Olympics in 2016. She was there with me during the tough times so it’s fitting that I’m coming into the club she ran with.” 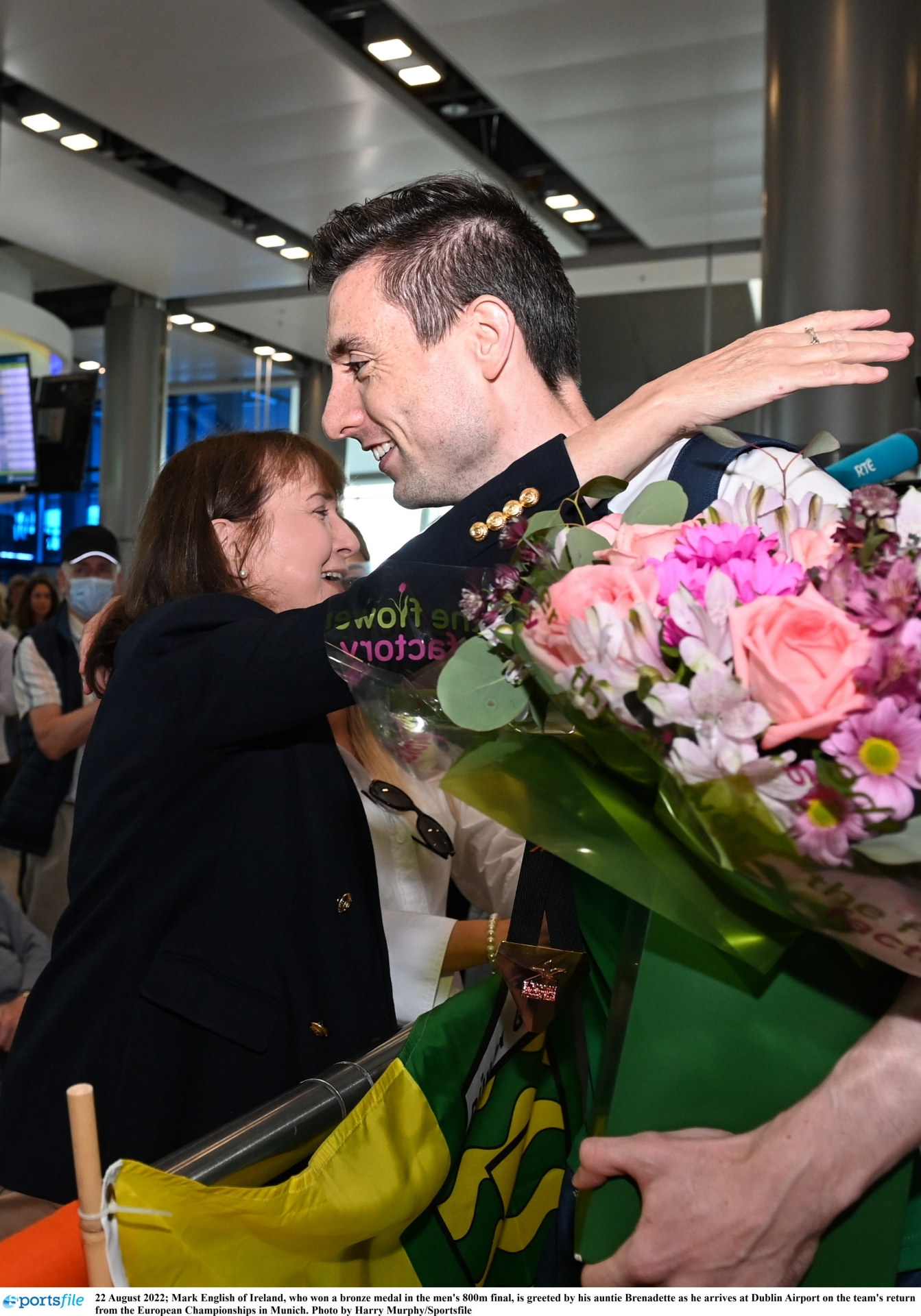 The Letterkenny native doesn’t follow conventional thinking. McMonagle once said English was ‘a Rubik’s Cube among my many puzzles’.

Last summer, he qualified for the Olympic Games and set a new Irish 800m record (1:45.71) while working as a doctor in the Mater Hospital. He was in the last full rotation of his intern year, but still managed to go where no Irishman ever did over two laps of the track.

“The night shifts aren’t complimentary towards improving in athletics,” he said at the time.

“It’s all part of the challenge. You just have to accept it for what it is and get on with it.

“I realise how lucky I am to be competing. Some people aren’t even able to work at the moment. I‘m lucky to be able to do the two things that I love.”

Last Sunday evening, a controlled English timed 1;45.19 to claim bronze at the Olympiastadion in Munich. 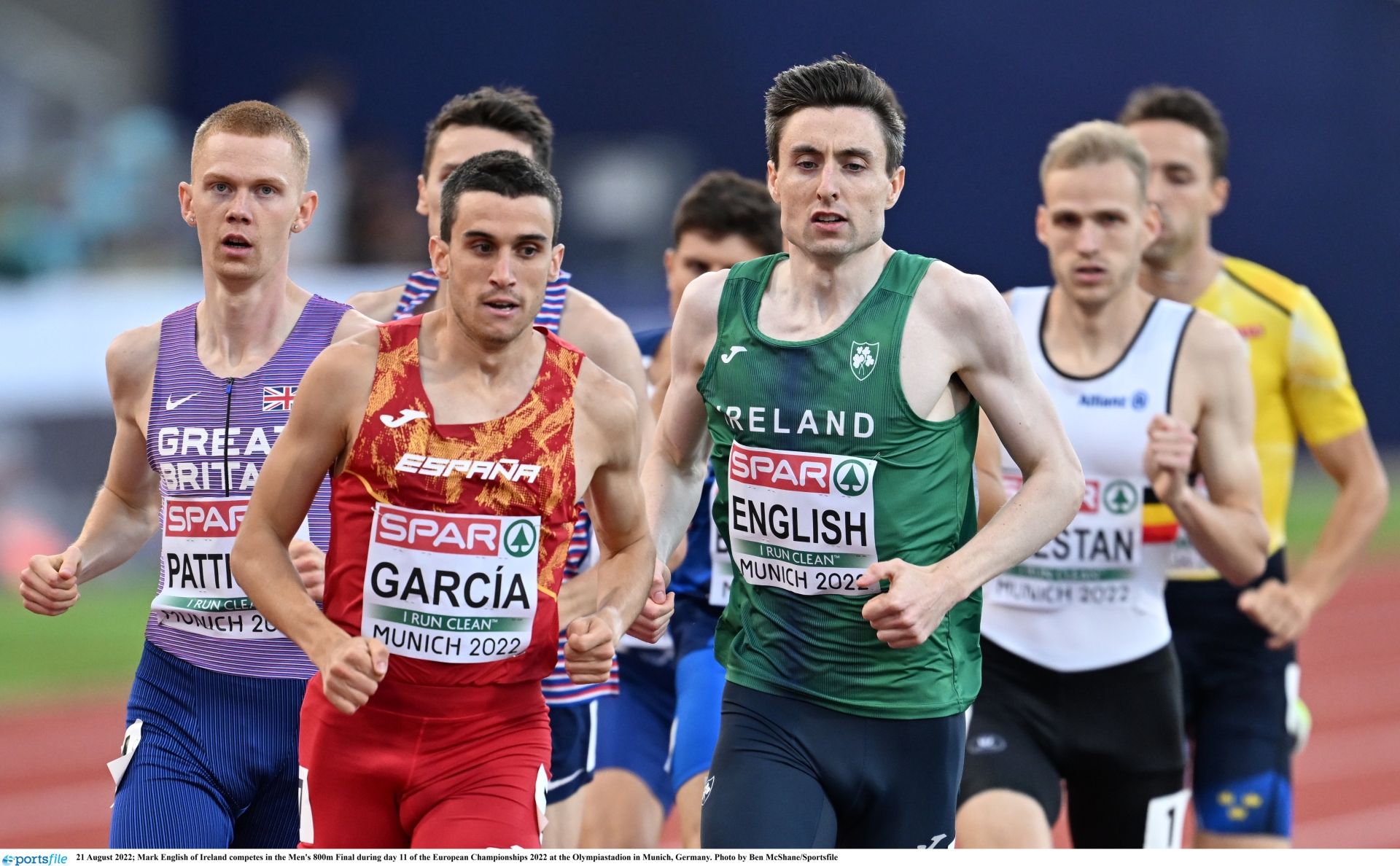 The intent was clear from the get-go.

Mariano García of Spain won gold in a new personal best 1:44.85 with Great Britain’s Jake Wightman - the World and Commonwealth Games 1500m champion - leaving with silver with a 1:44.91, a season’s best.

English, coached now by Feidhlim Kelly - whose influence on the Donegal man is evident - hung onto the leaders over various points of the race.

Initially, Simone Barontini of Italy made the running. When García flicked the switch just before the bell, English was well poised.

English his place on the inside and was a comfortable third. Andreas Kramer and Benjamin Robert valiantly attempted to close the gap down the final 100m, but English showed all of his excellence to cross the line in third.

“I was quite goosed out there,” he said afterwards.

“It was difficult to hold on, so I'm delighted that I came away with a medal. I was absolutely flat out, there was nothing else I could give.”

The focus was something that was always obvious.

McGonagle was with him in Zurich as Irish team manager when English won bronze in Zurich.

“He’s an intelligent man and a great racer,” he wrote in Relentless. “I took a view that I was with him, but should remain very much in the background. I let him dictate his own routine.

“Our conversations were usually light. He was like a fighter going into battle when he was going to race. He was in a zone.”

English is the first Irishman to become a multiple medal at these Championships. Sonia O’Sullivan, Derval O’Rourke and Ciara Mageean - who scooped the 1500m silver on Friday - are the only others who can answer that illustrious roll call.

His journey still has more stops on the map.

“I guess I still have that hunger for it, that's always the big thing I think,” English said.

“I have heard from older athletes that the hunger could go, it's tough to keep it up.

“I had a good year this year. I came tenth in the World Championships and I came third here, so I'll count that as an achievement for this year. I'm really happy.”

English’s mind won’t be focussed too much on the glory of Sunday. He has pencilled in a couple of season-closing races and already he is thinking ahead.

The 2023 World Championships will be in Budapest and the 2024 Olympic Games in Paris remain a target.

“I just need to power on now and try and get the qualification for the worlds next year. I think the standard has gone up again, so I'll try and get as many ranking points as I can while I'm in good shape.”