Preview: High flying Harps travel to face a Sligo side that can "challenge for honours" this season

Biggest test to date for Ollie Horgan's side 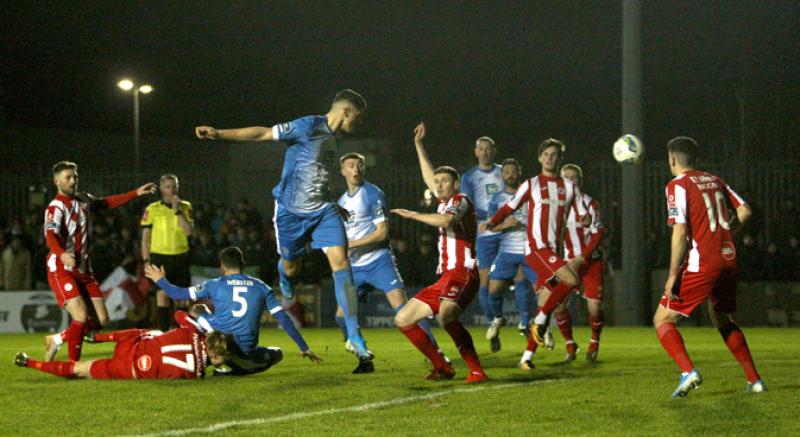 The big north-west derby is on Saturday. Photo: Thomas Gallagher

The first North West derby of the new season takes place on Saturday night as high-flying Finn Harps make the short trip to the Showgrounds to take on an equally in-form Sligo Rovers team.

Both teams are unbeaten, with Harps leading the way in the Premier Division alongside St Patrick’s Athletic, and Sligo tucked in behind in joint third.

And ahead of Saturday night’s mouth-watering derby encounter, Harps boss Ollie Horgan says his team will be facing a side that can challenge for league honours this season.

Indeed the Harps boss believes his Sligo counterpart, Liam Buckley, has assembled the club’s best squad since they won the league back in 2012.

“They’ve had some good teams over the years, but this is the best yet,” Horgan declared.

“They were good last year too. They even got into Europe. But if anything, with the players they now have, they’ve kicked on again.”

Not surprisingly, the Harps boss feels his team will have to be at their best if they are to maintain their excellent start to the campaign. He has also pointed to the fact that Harps, since his time in charge, have found victories hard to come by at the Showgrounds.

“I don’t remember us winning there in the league during my time,” Horgan said.

“We’ve managed to pick up some draws, which as things turned out, proved to be decent results.

“There’s been some close games over the years, but they are always very strong at home.

“And when you look at the players that are there now, they’ve got so much quality and experience.”

Horgan has pointed to the arrival from Shamrock Rovers of experienced midfielder Greg Bolger who has linked up again with Liam Buckley. Bolger was an important player under Buckley when St. Pat’s won the league title back in 2013.

“Bolger is a brilliant addition, and along with the likes of Romeo Parkes, Ryan De Vries and Walter Figueira, they have quality.”

Figueira was on the mark as Sligo held the champions Shamrock Rovers to a 1-1 draw last Saturday night.

At the same time, Harps defeated Waterford FC with a late Dave Webster strike sealing a 2-1 win. The Donegal side will go to Sligo with a pep in their step.

“The confidence in the camp is good,” Horgan said.

“And everyone wants to keep this run going. But it’s not easy.

“We have three games now in the space of seven days which will be a test in itself.”

The busy run of fixtures will see Horgan and his assistant Paul Hegarty dipping into a squad which is already hit by long-term injuries.

The league’s top scorer Adam Foley is once again a doubt for this weekend. The Dubliner has been hampered by a knee problem in recent weeks, and it forced him out of the action towards the closing stages of the Waterford game.

“When you’ve got games coming up on Tuesday night and then again on Friday, you’ve got to manage players like Adam carefully,” Horgan said.

“Put it this way, I can’t see him playing in all three games.”

The Harps boss said there are other players carrying knocks too, and like Foley, probably won’t feature in the other games next week.

Harps are away to Longford Town on Tuesday night before they welcome St Pat’s to Ballybofey on Friday night, April 23.

The following week’s game against Shamrock Rovers at Finn Park on Friday, April 30,  has been brought forward from 8pm to 7.45pm.

This Saturday evening’s game at the Showgrounds has a 6pm start.