Who made it into this week's IFL 'Dream Team'?

Versatile defender Tracey gets the nod at left back 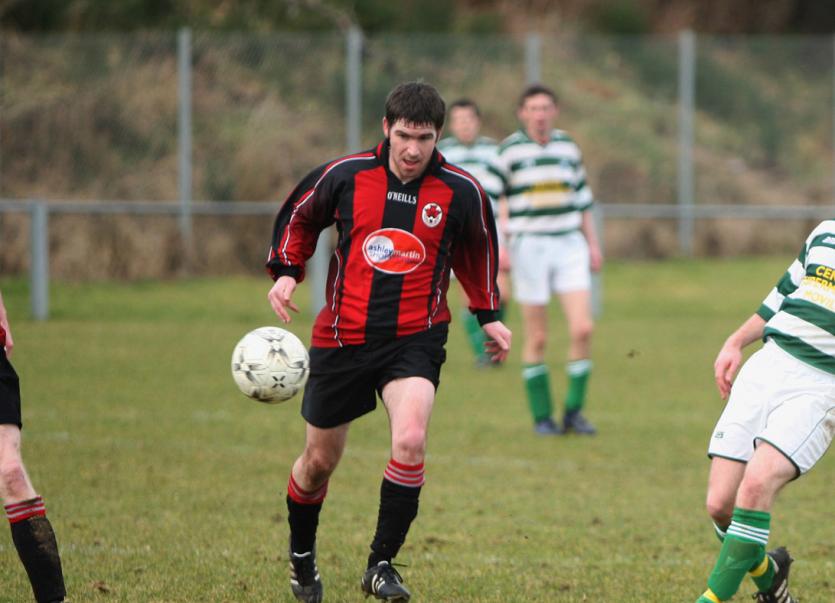 'GREAT TECHNIQUE': Brian 'Banjo' Tracey back in his heyday.

David McGeady (Goalkeeper)
Aileach FC
The best keeper I ever played with. I've played with and watched him since 1995 and in that time, you could count his mistakes on one hand. Brilliant keeper; not much of an Irish dancer, though.

John McFeely (Right back)
Culdaff FC
Not a recognised right back, but was such a good footballer he could play anywhere on the pitch. His reading of the game was exemplary; made the game look so easy.

Shaun McLaughlin (Centre back)
Cockhill Celtic
Shaun was a defender when I started playing. His reading of the game and positioning was so good he rarely had to make a tackle. Could step into midfield in this team if required and be as good as any of the midfielders I've picked.

Shaun Devlin (Centre back)
Clonmany Shamrocks
Very underrated defender. Often seen as a hard man, which he was, but offered so much more. A warrior and leader on the pitch, with an unbelievable will to win.

Brian 'Banjo' Tracey (Left Back)
Redcastle
Banjo was usually deployed up further up the field, but to gain extra space was used on occasion as a left back. Given space anywhere on the pitch, he could dictate the game with his technique and passing ability.

Paul Doherty (Centre midfield)
Illies Celtic
Paul was for some years the best centre half and centre midfielder at the one time. Strong, smart and decisive; everything you want in a midfield anchor. First name on the sheet; a class act.

Gareth McGlynn (Centre midfield)
Aileach FC
The most influential player I have ever seen on a pitch. Over 370 appearances for Derry under eight managers. In two full seasons with Aileach, one league title, two Credit Union Cups, one League Cup, one Ulster Junior Cup (and a semi-final to come). Not a coincidence. Great feet - but poor with his hands!

Shane Kerrigan (Centre midfield)
Aileach/Bridgend
Had the pleasure of winning an All-Ireland with this man in 1993. Rarely touched the ball with his right foot or head, but had a magnetic left foot that had every trick in the book. If you made a run, you always got the perfect pass. An ideal supply line to my lethal forwards.

Brendan Devlin (Right forward)
Clonmany Shamrocks
The hardest working forward I ever played against. Could score all types of goals. Won everything at Clonmany, but inspiring Carn to the league title in 2014 gave him legend status.

Martin Cavanagh (Centre forward)
Clonmany Shamrocks
Martin was the best player at holding the ball up I ever played against. He could see all around his so early that you thought he had eyes in the back of his head. The perfect foil for my other two forwards.

Nigel McMonagle (Left forward)
Moville Celtic
A pain in the backside to play against. Like Brendan, fast and lethal if he got half a chance. His scoring record is up there with anyone and he continues to live up to those standards year after year.

Martin Farren: Very unlucky not to be included. The rock that the great Redcastle team was built on. Magnificent in the air and deceptively quick. A top player and a gentleman to boot.

Paul McLaughlin: As versatile as they come. Could play anywhere on the field and look accomplished doing it. Still playing and making it look easy.

Terence Doherty: Terence was only young by the time I packed it in, but he is the ideal man to bring on if any of the forwards get tired. He's half an Aileach man anyway!

Kieran McDaid: Watched him for years, on his day the best player in the league. Not on his day, he tells everyone what his thinks of them! Very talented.

Peter Devlin: Though best known as a great keeper for Clonmany over the years, it was when he went to Aileach and I got to see him up close that I realised just how good he was.