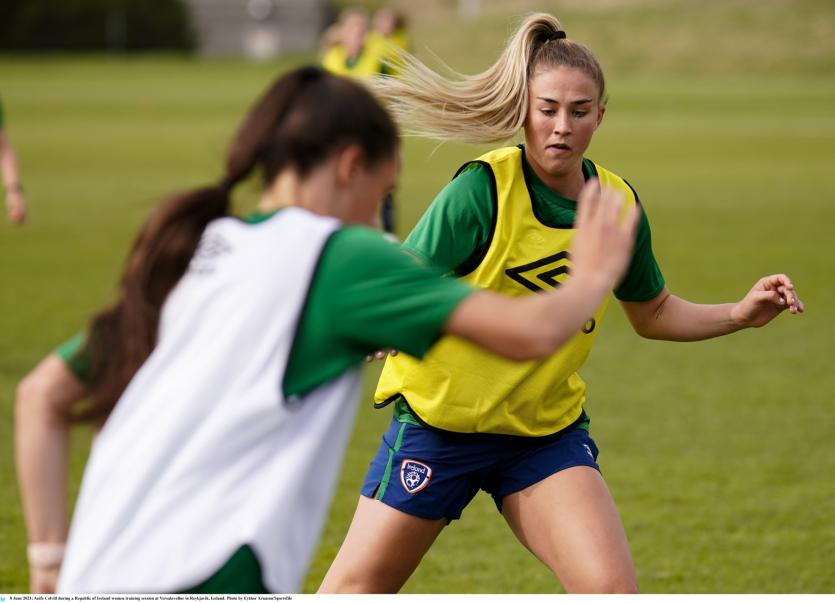 Aoife Colvill during a Republic of Ireland women training session at Versalavollur in Reykjavik, Iceland. Photo by Eythor Arnason/Sportsfile

Australian-born Aoife Colvill is in with a chance of making her international debut for the Republic of Ireland Women’s National Team this week in Iceland with plenty of support from Donegal.

Striker Colvill, 20, is a daughter of Andrew Colvill and Siobhan Barrett, whose parents Billy and Bernie are living in Ashlawn, Letterkenny, and the niece of Neil, Claire, Shirley and Shona.

Only last Sunday, Colvill helped Glasgow City to win their 14th Scottish Women's Premier League title in their final game of the season against Rangers. She previously played for Canberra United and represented Australia at 2019 AFC Under-19 Women's Championship qualifiers.

A second cousin of Amber Barrett from Milford and FC Koln, Colvill is training with Roma McLaughlin, a native of Greencastle and on the books of Connecticut Fusion, and Ciara Grant, from Letterkenny and a player with Shelbourne.

Colvill is from Cairns in Queensland and is awaiting international clearance from Fifa to be available for the two fixtures for Vera Pauw’s side, who play their Icelandic hosts in  Laugardalsvollur, Reykjavik, on Friday and then again on Tuesday, June 15.
Both matches, kicking off at 6pm, are live on television on RTÉ Player and the RTÉ News Channel.