Bonagee had a big derby win over Letterkenny Rovers, but must now face Cockhill Celtic to see who progresses to the national rounds of the FAI Intermediate Cup 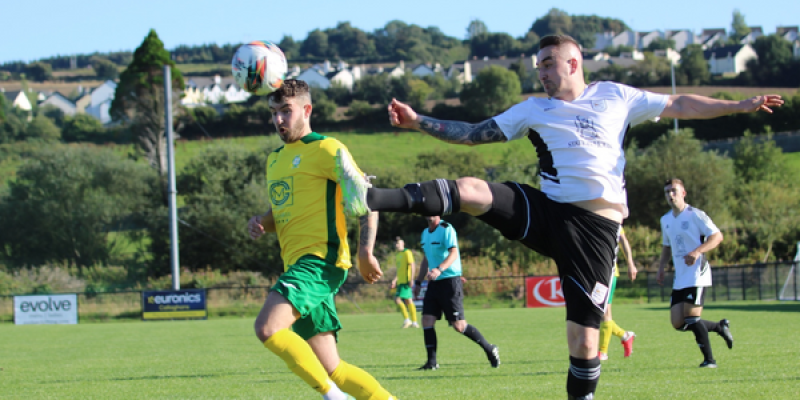 It was a measure, perhaps, of the standards he now demands that Jason Gibson felt a certain frustration at half-time on Saturday.

His Bonagee United side was 3-0 in front and well on their way to a 5-1 in the FAI Intermediate Cup, but Gibson says his men could’ve been better.

Still, the goals from Gareth Harkin, Michael Funston and Conor Black had them kick-started with Deano Larkin’s second-half brace clinching a spot in the next round.

“Strangely enough, we were a wee bit frustrated with ourselves at times in the first half,” Gibson told Donegal Live.

“It was a matter of getting the first goal to settle us. The bits of quality in the first half were the goals.

“We were strong defensively. We were delighted to go in 3-0 and it probably shows where we’re at that we were still frustrated. It’s just about getting to the next round.”

Harkin opened the scoring and, less than two minutes later, Funston cracked in a sublime second when he finished from the right touchline with ‘keeper Mark Anthony McGinley off his goal-line.

Gibson said: “‘Funsty’ always has a bit of improvisation about him. He did it in a cup final last season with his left foot. He’s always looking to the goalkeeper. He’s seen Mark Anthony off the line a bit there. It was a great goal and it probably settled the game.”

Bonagee were quarter-finalists in last season’s Intermediate Cup, falling to a narrow 1-0 defeat to Rockmount in Cork.

This season, only one team from the Ulster Senior League will go to the national rounds with Bonagee now set to face Cockhill Celtic - also quarter-finalists last time around - for the right to advance.

Gibson, whose side won a cup treble last season, said: “I would have hoped that ourselves, Cockhill and Letterkenny would have been able to go out of the county to represent the Ulster Senior League. It’s not happening now and we have to get out the hard way.

“When you get a taste of it, you want more. Our boys felt that they left something behind in the quarter-final last season down in Cork. There is a hunger there, but Cockhill will be feeling the same.”