While Finn Harps lost heavily to Shamrock Rovers on Sunday evening, manager Ollie Horgan fumed at the awarding of a penalty that led to Rovers' second goal 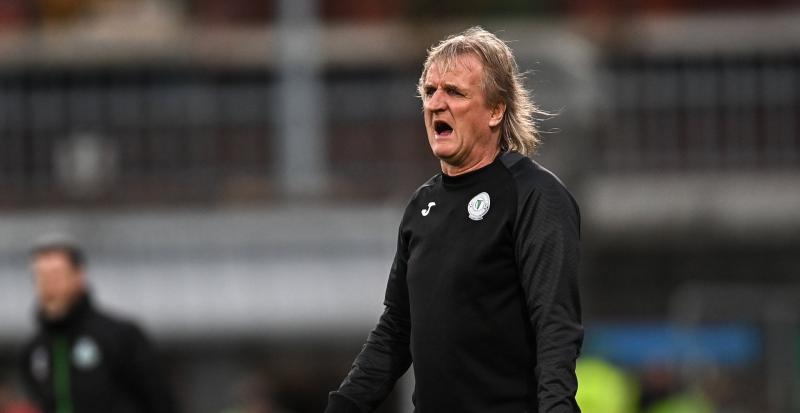 Finn Harps manager Ollie Horgan fumed with the decision to award Shamrock Rovers a penalty for their second goal in Sunday’s 5-1 defeat at Tallaght Stadium.

Harps were 1-0 down when, in the 35th minute, referee Derek Tomney adjudged Ryan Rainey to have fouled Aaron Greene and gave the Hoops a penalty.

Rory Gaffney scored from the spot and by half-time Rovers were 4-0 in front.

While Horgan admitted that his team was ‘comfortably and comprehensively beaten’, the Harps boss could not hide his anger.

“I have watched the penalty 20 times and, without mincing my words, it was a disgrace,” he said.

Finn Harps rooted to the bottom after heavy defeat in Tallaght

A 5-1 defeat at Premier Division leaders Shamrock Rovers means Finn Harps are one point behind UCD with seven games to play.

“That is not why we lost the game, but it needs to be addressed. It was a disgrace and he gave a booking on top of it.

“To be fair to Aaron Greene, who has always been sporting, he says ‘no chance’.”

Horgan was informed by the fourth official, Ben Connolly, that the penalty was awarded due to an apparent ‘push’ by Rainey on Greene.

“We looked at it and there was no push,” Horgan said. “Unless he imagined it. At 5-1, it looks like I’m clutching at straws, but it was a huge moment in the game.

“At 1-0 down, we were comfortable and I don’t mean ‘comfortable’ as in we were going to win the game.

“We were comfortably and comprehensively beaten, but I have to mention the penalty. It is difficult for me to mention it without any loud talking, but it’s not good enough. I asked him to look at it and I’m sure he will look at it.

“I don’t want to take away from a very good Shamrock Rovers, but certainly there was a helping hand.”

Neil Farrugia had put Rovers ahead and his second goal made it 4-0 after Andy Lyons’ superb third. After Jaime Siaj pulled a goal back with his first Harps goal, Jack Byrne made it 5-1.

With UCD having defeated Dundalk 3-2 on Friday, Harps are now bottom of the Premier Division, trailing UCD by a point with seven games remaining.

Horgan said: “From the concession of the penalty to half-time, we were brutal. That is nowhere near good enough.

“I think it will go to the last game. We don’t want to fall away and have nothing to play for.”