"What made the return of this engine even more historical was the fact that this was the very last engine to operate a passenger service in the county, on December 31 1959, leaving Donegal Town Station for Strabane, " Niall McCaughan, Manager at the Donegal Railway Heritage Museum said. 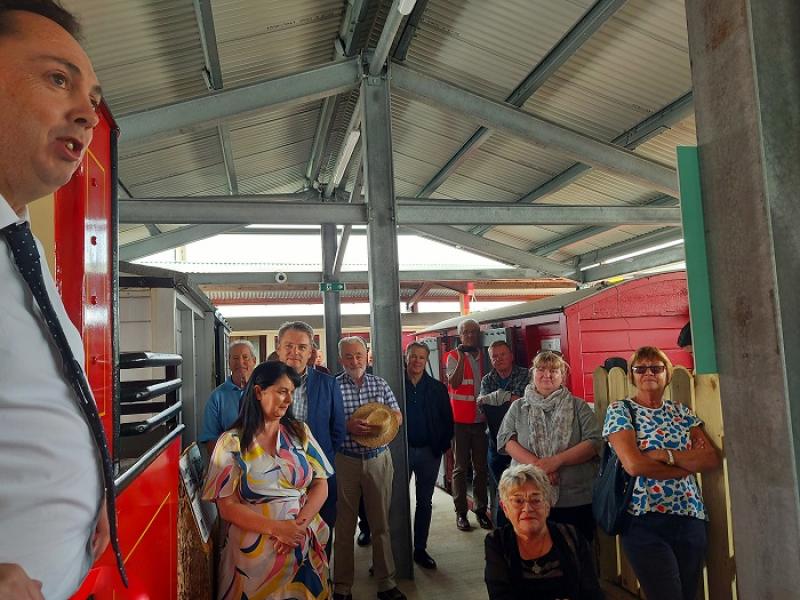 Donegal's most famous train engine 'Drumboe' has built up a head of steam amongst visitors and train aficionados after it was officially launched this week, after her return several months ago to her home in Donegal Town.

The Drumboe project is just the latest in a number of initiatives at the Donegal Railway Heritage museum (DRHM) which has also seen the installation of Ireland’s first interactive railway cab in recent months and which has boosted numbers in what is quickly becoming one of the most attractive and popular attractions in the county.

Niall McCaughan, Manager at the Museum expressed his delight at the milestone event:

“This is a major milestone for us and the County, as this is first original Donegal steam engine returned to the County in many decades. What made the return of this engine even more historical was the fact that this was the very last engine to operate a passenger service in the county, on the December 31 1959, leaving Donegal Town Station for Strabane.

"The homecoming event at the end of last year became one of the biggest and most engaging events in the County in recent times. We have to say that we were really surprised by the crowds that lined the route particularly from Strabane to Donegal Town, and how emotional people were about Drumboe returning. The entire project seemed to be taken to the hearts of the people in the County."

He added: "Since the steam engine arrived back, work has continued on completing the “Drumboe Project” which included the building of a new presentation platform for Drumboe, a canopy to cover her, LED feature lighting, safety barriers, landscaping across the site, as well as the building of a new track for a ride-on railway.

"We have also installed new interpretative signage as well as audio presentation signage which plays recordings of people taking about the Donegal railways.

In the last month, we have also installed Ireland’s first interactive railway cab which was conceived by our creative team and proving very popular. Over the summer we have noticed an increased interest in our museum due to the return of the engine and upgrade of the site, making the museum now one of the must-see places to visit in the County.

Nick Maskery, Rural Development Manager, DLDC stated: “The restoration of Drumboe and upgrading works to the railway heritage centre project provides an exciting new heritage tourism offering. The LEADER team in DLDC is proud to have played a role in this project.

"The return of Drumboe to the Donegal Railway Heritage Centre will provide a link to Donegal’s railway heritage and further enhance Donegal Town’s offering as an all-year-round destination on the ‘Wild Atlantic Way’.

I would like to commend Niall McCaughan and the team at Donegal Railway Heritage Centre for all their hard work getting this project off the ground through the pandemic and what proved to be a challenging two years.

"We now look forward to welcoming visitors to this truly unique tourist attraction. On behalf of DLDC, I would also like to thank all the LEADER project partners and funders including the LCDC for their effort and support in assisting the delivery of this project.”

In relation to the restoration of Drumboe herself, it was thanks to donations from across the island of Ireland and further afield, including Graham Forbes (grandson of CDR Manager Henry Forbes), The North West of Ireland Railway Society and many others, but it was Donegal Local Development CLG who came in with the main part of the €100k+ project with the LEADER grant from Donegal County Council. McMullin Associates (Architects), Glebe Builders, DSM Consulting Engineers, JC Engineering as well as Project Manager Mark McDaid, brought the project together.

Graham Forbes who is a successful businessman in Thailand was able to send a special video message for the opening where he said:

“My grandfather would have been so proud to see Drumboe back in Donegal Town at the Museum, and congratulate the team for bringing her home."

The full opening event was recorded and can be seen online at https://youtu.be/Am9YjthGeO8 ; start 20mins to watch the main event.

The museum is still fundraising to make up a small shortfall in funding so if people want to contribute they can kindly do so through http://donegalrailway.com/donate .”

For more information about Drumboe or the museum in general, contact Niall at manager@donegalrailway.com.